This week’s Kickstarter is an adaptation of a movie. Based off of the black comedy, 100 Tears: The Comic is about a slasher clown. I interviewed the writer (also editor-in-chief of Master Plot Comics) and the colorist of the mini-series about the killer project.

100 Tears was a black comedy movie back in 2007 about a lonely circus clown mistakenly put away for acts he didn’t commit. Fueled by revenge, the clown turns to murder in order to get revenge against the people who wronged him. Next on his hit list are two tabloid reporters who try to hunt him down. The comic book mini-series will be six issues long.

The mini-series will be published by Master Plot Comics. The independent comic book publisher has published several creator-owned sci-fi and horror titles including Sad Monster, Cocaine Pet Store and Bullets & Angels. The writers of the series were the writers for Bullets & Angels, Brian Lee Byrd, and Sarah Hollis. Over at Master Plot Comics, Byrd is the editor-in-chief and Hollis is the writing director. The artist is Saint Yak and the colorist is Robert Nugent.

This Kickstarter is raising money for the first issue of 100 Tears and additional money may go towards future issues. For $5 you can be “The Victim” and get a PDF of the comic. For $10, be “The Carny” and get a physical copy of the book. There are numerous awards going up to $500 and more. The project will be successfully funded if at least $6,000 is pledged by November 16, 2015, at 8:30 PM EDT. You can pledge the comic on their official Kickstarter page.

I spoke about the project with writer and editor-in-chief Brian Lee Byrd and colorist Robert Nugent:

Me: Why did you want to adapt the movie 100 Tears in particular into a comic book?

Brian Lee Byrd: With the film being eight years old, I wanted to give it a fresh reboot. I felt like where the original was good, it could have new potential as a comic. The original film had a limited budget, but with comics, a limited budget doesn’t stop you from having amazing effects. We want to up the level of gore and add some special effects that the film downplayed to maximize the story.

Me: Is the story the same as the movie or different? Have you added scenes, taken some out?

Byrd: We have used the same storyline as the film, however, we have taken out some scenes to push the story along, as well as made some scenes a bit different in order to enhance readability.

Me: You wrote 100 Tears with Sarah Hollis. Did you each write different parts of the script or specific elements? How did that work?

Byrd: Sarah looked over the original script to the film and helped maintain the pacing, while I wrote the majority of the slasher effects. We adapted the script together other than that. 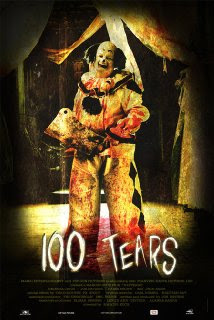 Me: What is the number one reason people should back 100 Tears: The Comic?

Byrd: We’re asking for Kickstarter support to jumpstart the production of this project. We can fund the project without backer support, however, it will take a significant amount of time to release book.

Me: Why do you think everyone loathes a clown?

Byrd: That is the official motto of the film, and we adopted it for the Kickstarter campaign. Clowns are a bit freaky, and I think that the major reason people are scared of them is because they represent the hidden desires people hold beneath masks of everyday.

Me: Who are some of your favorite slashers?

Me: You’re also the editor-in-chief of Master Plot Comics. Can you tell us a bit about that job and what it entails? 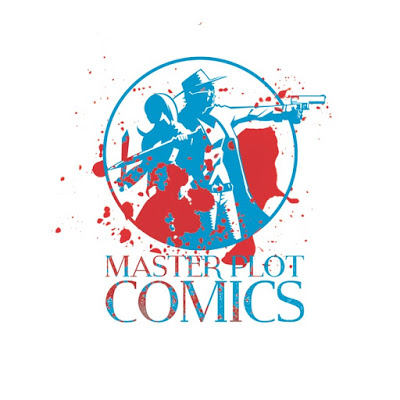 Byrd: Follow your dreams. It’s tough work, and there are a lot of nay-sayers, but push through, and make the best book you can. You don’t have to have a lot of money to make comics, so keep making comics.

Me: How would you describe the colors in 100 Tears: The Comic?

Roger Nugent: When Brian first pitched me the idea of 100 Tears he wanted it to be dark, gritty and somewhat monochromatic. I watched the film prior to coloring and it is very dark with a lot of blood. That drew me in, and I said: “yeah, I’ll give it a shot”. I’ve tried to match the coloring of the film to the comic.

Me: What is the number one reason people should back 100 Tears: The Comic?

Nugent: If you are a horror fan then you should definitely check it out. It has murderous clowns, blood, guts, fear, and an investigation aspect to it.

Me: Why did you decide to become a comic book colorist?

Nugent: I decided to become a colorist about 6 years ago when I graduated from college. I’ve always loved comics and I have a passion for making every comic I work on the best it can be. And I love to paint. 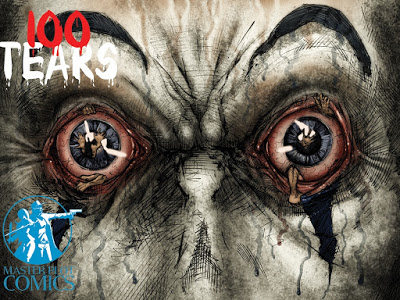 Me: Can you talk about the importance of coloring in comics?

Nugent: I feel that the colors bring a page to life. It sets the tone of the comic. It also helps with eye movement through panels. You make whatever part of the panel brighter or higher contrast than the other part of the panel. The eye will naturally go there and coloring just helps with that.

Me: What tips do you have for coloring a page effectively?

Nugent: I try to figure out the color scheme by loosely coloring over it and seeing where my eye moves across the page. When that’s all figured out I render it until it is done. Also, make sure your editor approves the colors before you color the whole page.

Me: What words of advice do you have for people aspiring to be comic book colorists?

Nugent: Keep working, get better and better. Take criticism and build off of it, don’t let it get your down. Just keep working and build a style that’s awesome and someone will take notice.

Me: Thanks for your time Brian and Robert. You can back 100 Tears: The Comic here.

Other “Kickstart the Week” features:
Karl Vincent: Vampire Hunter: “Foul Blood”
Super! Volume Two: The Secret is Out!
Fractal No. 1 – Waves in Tyranny
Age of Revolution: Volume One
Silver Volume 2