The world of G.I. Joe and Street Fighter collide in the IDW Publishing mini-series Street Fighter X G.I. Joe. The terrorist organization known as Cobra is teaming up in an “unholy alliance” with Bison and Shadaloo to take over the world.

The writer of the limited series is Aubrey Sitterson (Hulk, Superman, Tech Jacket, Worth) and the artist is Emilio Laiso (Hack/Slash: Son of Samhain). Street Fighter X G.I. Joe is a six issue long crossover. The Joes will be going up against the characters of Street Fighter in a secret tournament featuring 16 combatants. Characters include Ryu, Snake Eyes, Guile, Scarlett, Chun-Li and Duke, among others. 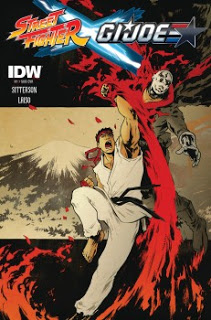 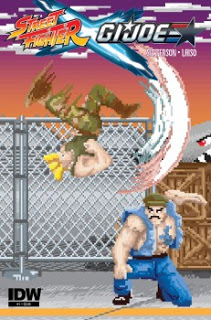 Street Fighter was originally a fighting video game series created by Capcom. The first game was released in the arcade back in 1987. There are many fighters you can play from different countries around the world who have different fighting styles. The main fighter is Ryu, a martial artist. The games expanded into animated series, films and comics as well. Two attacks in the game, Hadouken and Shoryuken, also became quite popular memes.

G.I. Joe was originally a line of action figures created by Hasbro. The G.I. Joe figures led to the coining of the term “action figures”. The original line, which came out back in 1964 and was based on The Story of G.I. Joe (1945), represented four branches of the military: the Action Soldier, the Action Sailor, the Action Pilot and the Action Marine. The toys expanded into numerous media including video games, animated series, films, and comics. 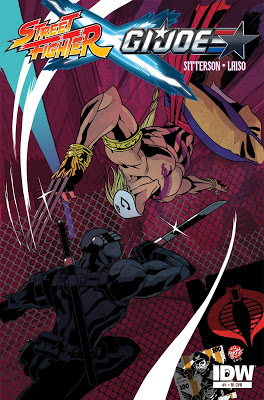 Street Fighter X G.I. Joe will be published in February 2016. I never really gave a thought to these two crossing over before. I was much more excited about the Street Fighter and Tekken video game crossover. Plus I’d still like to see a Street Fighter and Fatal Fury crossover.  (Can you tell which of the two franchises I prefer more?). Do you think this crossover is worth the wait? What are some of your favorite crossovers that IDW Publishing has done, or a Street Fighter or G.I. Joe related crossover? Personally I enjoyed it when Street Fighter (and other Capcom properties such as Skies of Arcadia and Okami) decided to join in on the Sonic and Mega Man crossover.