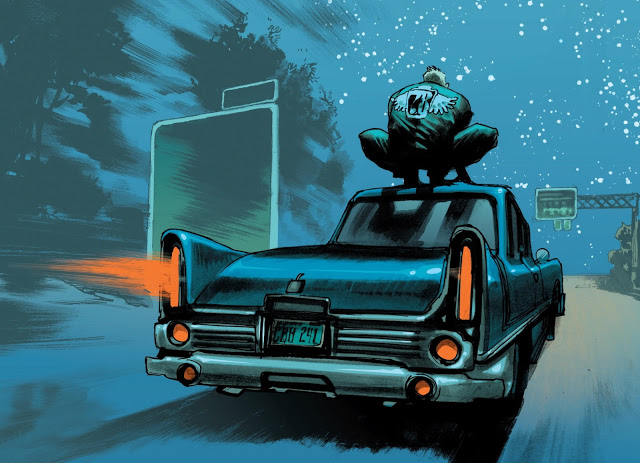 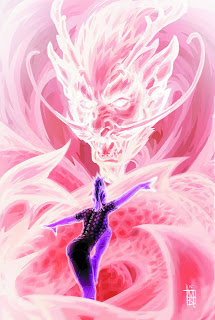 So, I’ve been waiting awhile for Mulan Revelations to return. The cover left me contemplating for weeks. This beautiful cover was part of an insanely dramatic fight scene. Like all of the issues prior to #4, I want multiple copies to hang on my wall.This issue had Adam and Mulan dealing with Adam’s falling out with his organization and the demons after Mulan furthering the attack they started in #1. Mulan’s brother is still an asshole and Mulan still takes no shit from anyone, not even her ancestors. Badass as always!

What I liked most:  THE FACT IT WAS BACK! I’VE BEEN WAITING SO LONG!

What I disliked most: It ended? I wanted so much more because I’ve waited so long for #4.
Favorite quote(s): ”Do you infuriate everyone you meet?”
”My first superpower.”
Favorite page: The page with Mulan & Adam first meeting the Dragon ancestor. 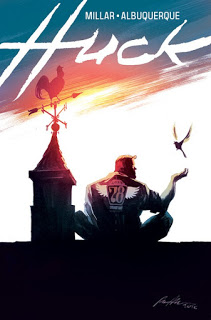 The only Mark Miller comic I’ve read has been The Secret Service. I loved that comic but Huck #1 I think trumps my love for the comic that gave me Kingsman: The Secret Service. Huck is beautifully colored and left me saying ‘aw’ multiple times while reading it. It felt very ‘Superman’ but I don’t mind that. I can’t wait to see where the rest of the comics will go and hope this series goes on for many years to come. Huck’s family is just as kind as he is. It was just nice to read something so pleasant.

What I liked most:  Huck is adorable!

What I disliked most: It wasn’t a full trade with the rest of the series.
Favorite quote(s):  The one with Huck giving someone money/other good deeds.
Favorite page: The ending page as well as Huck’s montage of good deeds to do. 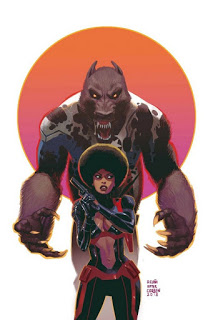 Aw Sam. Poor guy has been through enough and now he’s a werewolf. I felt like this should have been an October issue to go with Halloween but that’s just me. I’m curious to see if in #4 if Sam will still be a werewolf and for how much longer Misty will stick around to help save Sam’s ass. Misty and Sam were great together but I hope she becomes reoccurring so she doesn’t get out lived like TVD did with Katerine when I was actually watching that show. Sam’s narration makes me happy every time I read these comics and I want to own a trade of this series whenever it makes a trade that is.

What I liked most: Misty & Sam’s banter and werewolf puns.
What I disliked most: It felt a bit out of place compared to 1 & 2 but I still enjoyed it.
Favorite quote(s):  A flying werewolf and a communist? I liked him before but that’s too far!
Favorite page:  The Teen Wolf reference scene. 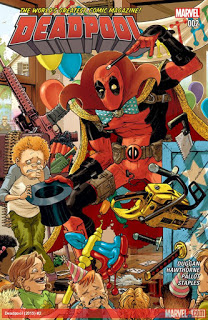 I read Deadpool to not have to really think but need to have something to do. I don’t have to think at all while reading Deadpool which is why I like reading Deadpool once in awhile. I prefer Deadpool when he is crossing over with other characters because no one else knows what to do with him. This issue felt like I was reading the current Harley Quinn series but with Deadpool and a different set of killers. It wasn’t a bad issue but I don’t plan on buying myself copies of this series.

What I liked most:  Wade’s typical breaking of the 4th wall.

What I disliked most: The story was pretty bland. Not all that hooked but wouldn’t mind reading #3 for a good laugh.
Favorite quote(s):  ”Do you want another Hawkeye VS Deadpool?”
Favorite page: When Clint popped up with the summons/shot an arrow at Wade. 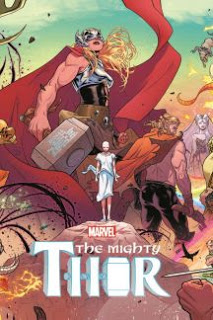 Why can’t this be a movie poster? This would be fabulous! I would love to see movie verse Jane become Thor. But I digress, this was an awesome issue. Jane is such a strong character and I love how everyone acknowledges it. I loved seeing her in the council and her scene with freaking Freya in jail. I want to go back and get the other Thor issues that have Jane as Thor. Now even though I am not all that fond of comic verse Loki I am excited to see how the team of The Mighty Thor writes that other Thors series with a bunch of other weird Thor characters. Nevertheless, I really did enjoy this issue a lot more than I thought I would. Jane’s narrations were fabulous and I love the font she gets when she is Thor.
What I liked most:  Jane commenting on helping that other patient while she was getting her chemotherapy.

What I disliked most: You know who is back.
Favorite quote(s): The flesh may be weak but the thunder is strong.
Favorite page: When Jane was talking to Freya. 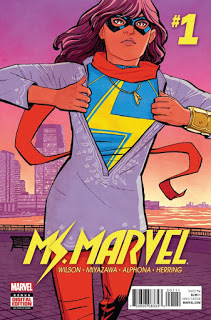 WHY ISN’T SHE IN THE MARVEL MOVIE OR TV UNIVERSE?! THIS GIRL WOULD DO FABULOUS ON SCREEN AND FILL THE WORLD WITH HAPPINESS LIKE SUPERGIRL OR THE FLASH DO ON TELEVISION! Between the writing and artists behind this series I am simply want to own all of the trades and I want a damn mini series of some kind for her.  I keep on recommending this comic to everyone that walks into the store I now work at, telling them to read it and read it with their family. If a father and daughter come in, I tell them both to read it. I loved this story and I can’t wait to see how the rest of it plays out!


What I liked most:  Kamala’s opening montage on her life now.
What I disliked most: The ending, I want more, now. Gimme Marvel, I know you have it.
Favorite quote(s): Everything really.
Favorite page: Freaking Kamala getting dropped off by Tony and Tony not helping her with her homework. 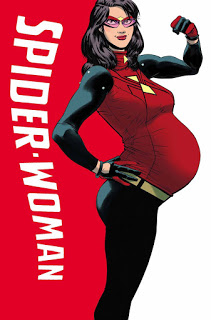 Why is Drew pregnant? Why am I supposed to care she’s pregnant?  Why is Jessica freaking Drew suddenly thrilled to be pregnant? Does the trope of once a woman gets pregnant she gets baby senses and now she’s totally cool with everything going on? Yes, Drew isn’t exactly thrilled but why torture yourself with missions? I just didn’t care for this and felt frustrated while reading it. I did enjoy the maternity party scene but that’s really about it.

What I liked most:  The maternity party.
What I disliked most: The baby daddy mystery.
Favorite quote(s):  I honestly didn’t have one with this issue.
Favorite page: When Tony got food thrown on him for asking Jess who the dad is. 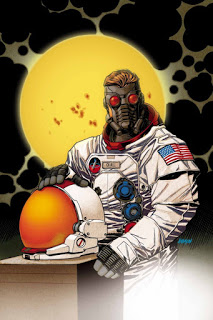 Oh Peter, you adorable little space dreamer you. I want nothing but the best for you and feel bad for your current life choices. I don’t know enough about Guardians of the Galaxy’s lovely Star Lord but this issue gave me a nice taste of what he’s like when he’s on his own and not with the movie verse team or Kitty Pryde. He just wants to ride an awesome spaceship but his moms friend doesn’t exactly want to let that be a thing. It was cute to see and I enjoyed him fighting with the asshole astronaut.  I plan on reading #2 just to see how it all plays out. The issue had cool art and a cool enough story that I will still be reading it. At least for another few issues that is.

What I liked most:  Peter wanting to be in space so badly.

What I disliked most: The time on Earth was a little bleh.
Favorite quote(s): The ‘people on Earth can suck it” line.
Favorite page: When Peter’s mom’s friend was all proud of Peter.

Here’s my rankings & ratings for the week