This week I’m showcasing the Kickstarter for The Gem Users, a graphic novel featuring martial arts, fantasy, sci-fi, super powers, action, drama and comedy. You even get the option of two different journeys the characters can take in the hardcover books. I also interviewed the writer, Michael Walton.

The Gem Users is a story about a strange meteor that shattered into pieces and spread all over the world. Those who find these gem pieces have a power inside of them released that even they weren’t aware they had.

What makes The Gem Users unique is the story—or should I say stories? Readers can actually choose two different stories, Story A or Story B, for the hardcover books only. The endings may be the same but the journeys differ. 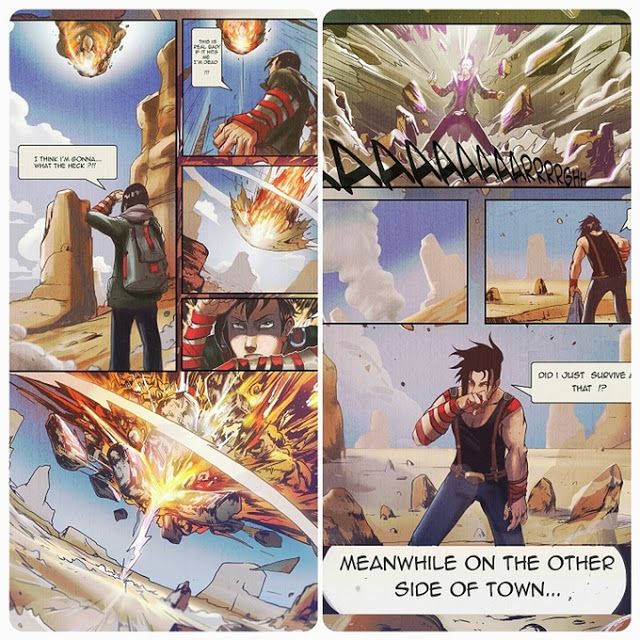 The Kickstarter project is raising money for the first print of the first edition soft covers and limited edition hardcovers. The rewards go up to $1,000. For $20 you can get a soft cover first edition print of the comic The Gem Users #1, an 11×14 print of the cover art, The Chibi Hero Sticker Set and a Chibi Patch of the main hero Tetsunori. At $30 backers will get an extra story added to your comic The Gem Users #1 showing readers a sneak peek story about the gem’s origins and a Silver Foil Hard Cover Edition book Vol. 1 with 50 pages of action, plus all the other previously mentioned awards. The project will successfully be funded if at least $5,000 is pledged by December 20, 2015 at 10:20 PM EST. You can pledge the project here.

Freelance writer Michael Walton wrote the script. He found his artist on DeviantArt, a user by the name of LongShortNeither. I interviewed Walton about the project below.

Me: Why did you decide to create two different stories that readers could choose from? In what ways do the two differ from each other?

Michael Walton: The reason for this was to really get backers involved with the project and feel like they are a part of it and not just giving away money and not have that special feeling like “man, this is gonna be so cool”! As for how they differ?! Well without a spoiler alert 😀 let’s just say they face some bad guys in story B that are very different from anything they will face in story A and are extremely bad ass! 😉

Me: Which anime influence the style and story of this book?

Walton: Wow that’s a tough one because I love anime but if I would have to pick a few they would be Naruto, Bleach and One Piece.

Me: Can you expand on why these three anime in particular were an inspiration for the graphic novel?

Walton: Well for me those three anime have lots of great characters, great stories to go with them, amazing fight scenes and I looooooove the comedy parts. Always brings me to tears haha. Anime like these are some of my favorites and I actually hope to turn my comic book series into an anime series, but that’s a dream for later on. 😀

Me: Who are the main characters of The Gem Users? Can you describe each of them in a couple of sentences?

Walton: Sure… 🙂 Tetsunori is our main hero and he’s the type that will step in and help anyone in need. This guy has some amazing talent and power.

Next we have Borjo… now this guy is the strong man of the group but man does he love to eat! And it shows a bit. 😀 When it’s fight time though he steps up to the plate!

Keyroshe is the beautiful blonde with a deadly sword. Her speed and sword skills are some of the best but… her crush on Tetsunori really distracts her sometimes during training, fights… well just all the time haha.

What can I say about our next guy Unaka! He’s the smartest guy on the team. He will analyze a battle and find weak points that will end in his favor.

Now Saniko is the fastest one of them all. Her sword attacks are so quick and you are unlikely to see them coming. She’s also the twin sister of Ashi.

Last and of course not least we have Taanji! This is the pretty boy of the group and with that you know comes girl trouble. When he’s not going crazy over the girls he’s actually an amazing fighter… when his mind is in the right place.

Walton: Well of course the main character Tetsunori because how can you not like the main person? 🙂 But I also like Taanji because he gets into so much trouble because of the ladies which brings me back to the comedy I love.

Me: Who are the artists you have been working with on this project and how did you find them?

Walton: The LongShortNeither who is on DeviantArt does all my comic pages and cover art.

Coby Ochrietor who I found online also does stuff like the chibi sticker sheet, bookmarks and so on.

Both are very amazing artists and I appreciate all of the hard work they did on this project.

Me: Do you have any advice for finding artists on DeviantArt?

Walton: Well with DeviantArt there are sooooo many great artist it’s hard to say, but best place to start is to look at the most popular section and just go from there.

Me: What is the number one reason backers should pledge The Gem Users graphic novel?

Walton: I believe it’s because of how unique my project is with the story and how I get backers involved with the project and heroes to choose the path they take. 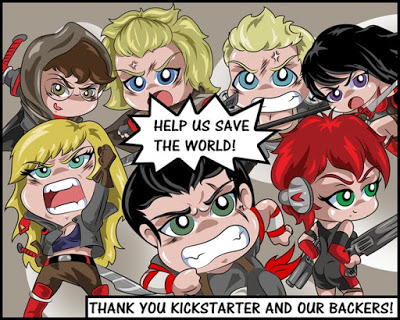 Walton: If you have a great story all locked up in your head, don’t let it just sit there! Get that golden key out and open up something amazing that people can enjoy reading and share with friends. The feelings you get from reading a great story are amazing! Let people know those feelings by telling us your story.

Me: Thanks for taking the time to answer my questions Michael. If you’re interested in pledging the Kickstarter for The Gem Users, check out the official Kickstarter here.

Other “Kickstart the Week” features:
Seamstress

Super! Volume Two: The Secret is Out!