The dark knight is meeting the heroes in a half shell in Batman/Teenage Mutant Ninja Turtles. That’s right, DC Comics and IDW Publishing will be joining forces for this six issue mini-series.

In Batman/Teenage Mutant Ninja Turtles, Krang sends Shredder, the Foot Clan and the turtles to an alternate universe. The crew lands in Gotham City where they meet up with Batman and several of his famous villains while trying to find their way home. The writer is James Tynion IV (Batman Eternal, Talon) and the artist is Freddie E. Williams II (Robin, JSA All-Stars). Jeremy Colwell (Powerpuff Girls, Super Angry Birds) is handling the colors. There will also be variant covers created by several illustrators including TMNT co-creator Kevin Eastman.

A few years ago, fans were teased with a Batman/Daredevil crossover that never panned out. Now, fans dreams are sort of coming true as the TMNT, a parody of Daredevil (the chemical that blinded Daredevil is what seeped into the sewers and created the TMNT), come face-to-face with the caped crusader. 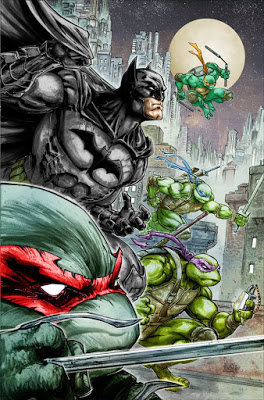 The first issue of this six issue mini-series will be released on December 9th, 2015. Are you looking forward to this crossover? As a big fan of Batman, the turtles and writer James Tynion IV, I think this should be a fun romp. What are some of your favorite crossovers that have involved Batman or the TMNT? Let me know in the comments below.