After the fiery finale at the end of the first issue, I expected a lot from the next issue of Black Magick. Unfortunately, there isn’t a lot of magickal moments this time around. Instead, there are a lot of quiet moments and a poor “twist” at the end, among a few positives that don’t keep this issue from being a bit boring.

After surviving the hostage situation, Rowan Black has some questions to answer for IAB. She also has questions to ask: who was the hostage taker spelled by and how did he know her true name? Another body also surfaces this issue. Is it related or just a horrible man finally brought to justice?

The first issue did a really great job of using just a couple of locations and making every moment count. In this issue, there are several locations and many moments that felt as if they could be cut down or omitted completely. For instance, when the captain tells Rowan she has to go into IAB for questioning, I assumed the IAB meeting would take place sometime next issue, if at all. Instead, Rowan goes right to the IAB meeting. Why not start right at the meeting? Yes, the captain did have some characterizing moments in the first part, but why not just add the most relevant tidbits to the scene right after Rowan returns from IAB? Or why not cut out the IAB meeting entirely and just have Rowan tell her partner Morgan how it went instead? It just feels like one of those moments could be better spent. Then, when Rowan is meeting her friend from the coven, she sees her talking to a priest who randomly mentions Calvin and Hobbes. 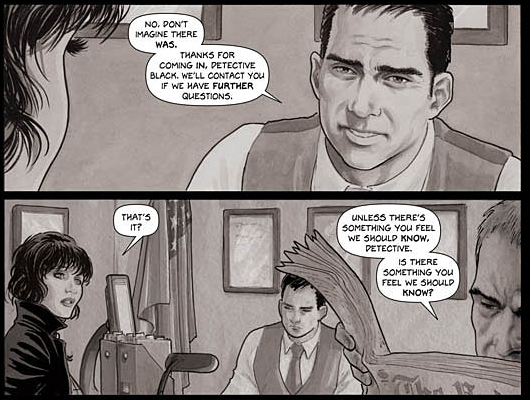 There is some good character development, mostly thanks to Rucka’s great dialogue. The reader gets a lot of character from Black through her conversations with her partner Morgan, the chief and her friend from the coven. However, there are a lot of random characters thrown in who are forgettable. The squad room is filled with cops whom I forgot about almost as soon as I flipped the page. Rowan is still our main focus, but slowly a couple of other characters are coming to prominence as well—though none of them hold a candle to Rowan.

This issue felt very much like your typical police procedural. There’s a lot of explaining going on in the dialogue, usually related to cases the cops are working on. This got kind of dry for me pretty quickly and I actually enjoy police procedurals like Law & Order: SVU. If you’re a huge fan of police procedurals and enjoy seeing people talk about a case rather than action, you’ll probably enjoy this issue.

The moment at the end, which constitutes the “twist” for this issue, doesn’t really make sense to the reader and probably won’t be explained until the next issue. This confusion actually happens a couple of times throughout the issue. It’s as if Rucka is just building up mystery for the sake of having a mystery, such as the people who are hunting Rowan. Clearly Rowan and the coven member know these beings, yet the reader is still left in the dark. A couple of ominous tidbits would be nice. 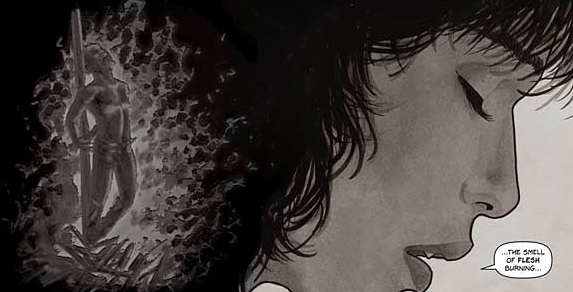 The artwork from Nicola Scott is still really great but isn’t given as much a chance to shine as it was in the first issue. Some stand out moments include a flashback in Rowan’s hair of a person burning on the cross. The conversation between Rowan and her fellow coven member also have some nice silent panels, which show off the artwork well. It’s not just the characters that stood out either, but the grey background at the café that has a really cool look. The emotions on characters faces are also so clear that some panels didn’t even have dialogue and were just used to show off these expressions. The black-and-white look gives this issue a nice noir feel as well.

With such an amazing start, it’s understandable that this issue couldn’t match the full magnitude of the first. The characters, Rowan in particular, have some really great dialogue. However, I feel like Rucka needs to tell us more about the story and add in more shocking events that don’t include a name drop. For its reliance on mystery and lack of magickal moments in favor of a police procedural, I give Black Magick #2 a 6.0/10.