This seems like a very fitting new title considering how unseasonably warm it has been this year. In the world of Snowfall, it no longer snows. This upcoming science-fiction series takes place in the year 2045. According to writer Joe Harris (The X-Files), “With Snowfall, we’re presenting a 21st century America in which the climate has gone completely to shit and where fully recognized corporate personhood and control isn’t just accepted, but necessary. The time for industry forces lying about the effects of climate change have long passed.”

This new world has been deemed the “Cooperative States of America” and is supported by the Hazeltyne Corporation. Harris went on to say that “They’ve moved on to profiting mightily from managing the fallout now. The haves enjoy the resources to mitigate the damage while the have-nots suffer the effects more acutely, living in these resettlement zones that are jointly administered by those same corporate forces with their fingerprints all over the crash. And it’s against this backdrop that resistance takes place. It isn’t clean, pretty or neat. Sometimes, we’re going to see, it’s not even that noble a fight. But desperation makes men do desperate things.” 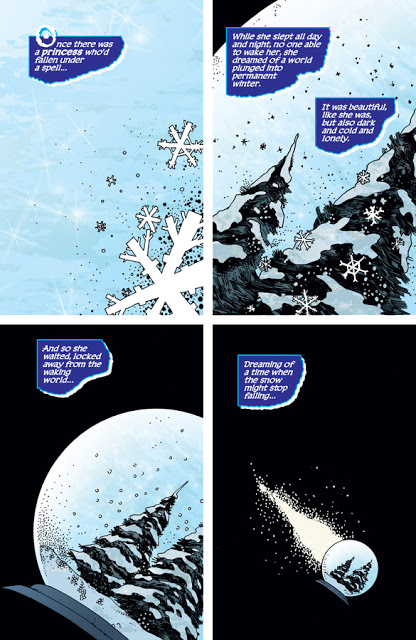 But my favorite part of Harris’ description of the ongoing series is when he goes on to say “This is a series with plenty of sci-fi action, ‘mad scientist’ manipulations and schemes, and a protagonist who may—or may not—be the greatest super-villain in history, depending on who writes it. It’s a story about humanity seeking dominion over forces beyond its control, the inevitable backlash, and the desperate attempt to reclaim, rebuild and redeem.” This possibly “greatest super-villain in history” is the White Wizard, and he looks really interesting in the preview. It looks like Jack Frost has a fanboy.

Writer Joe Harris is joined by his Great Pacific co-creator Martin Morazzo (Vertigo Quarterly), who had this to add about the series: “As we strove to do with Great Pacific, this new series presents a visually unique world where environmental catastrophe meets science fiction adventure. The look and feel for 2045 is both bleak and beautiful and filled with both dread and promise all at once. I am incredibly proud of this work!” 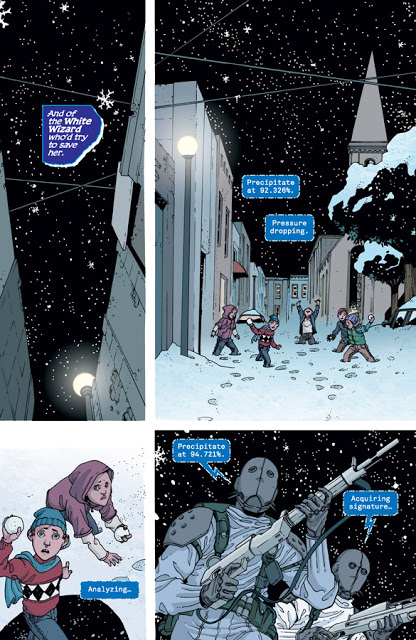 The first issue of Snowfall will be available in comic book stores on February 17th, 2016—fittingly the coldest month of the year. Comic book retailers’ final order cutoff date is January 25th, 2016.