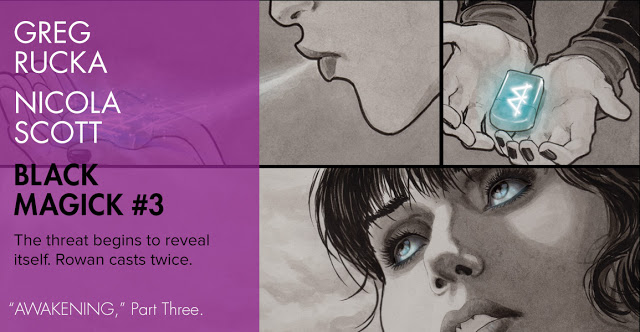 Hi world, my name’s Mimi Schweid and here’s my reviews for some of this weeks comics.  Black Magick #3, Wonder Woman #47, All New Wolverine #4, Captain America White #5, Howard the Duck #3 and Rocket Raccoon and Groot #1.

It doesn’t help this review but I’m catching up on the current James Bond, Jughead and Grimm Fairy Tales comics that came out this week. 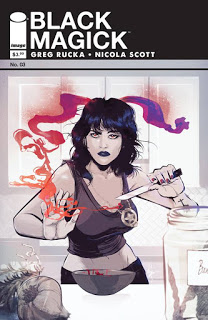 This is one of those comics that I am now shoving at people to read when it is in stock at the comic book store I work at. The art is amazing and the story has literally everything that makes me happy for a story checked off. Badass ladies, magick, pretty people, beautiful looking houses, characters with tragic back story that I don’t know all of the details of yet but really can’t wait to see where they go etc. I’m in love with this series and I’m thrilled I get to read it/review it each month.
What I liked most:  The lighter scene!
What I disliked most: The fact it reads so fast I want a much longer issue each month!
Favorite quote(s): I can’t pick one because I really freaking loved this issue.
Favorite page: The ward going up page was amazing.Rating; 5 out of 5 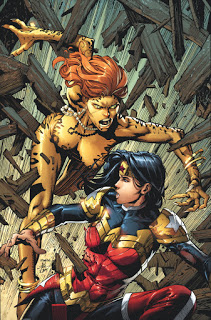 So before I read this issue Kat pointed out that the art was beautiful but the story was a bit filler. I read this before I fell asleep, so Happy New Years to me. It was a good comic, a dramatic one but a good filler one. Last months ended so dramatically that I was super pumped to see what exactly happened in this months issue. Despite the fact it was a very filler issue it did bring up some good things for Dina. She’s a God now, she can’t just go running into other Gods temples even if she’s friends with them. Gods are old and fickle and take everything far too offensive.
What I liked most:  The art.
What I disliked most:  The story.
Favorite quote(s): All of Dina’s cheesy lines. She had a lot and I smiled reading each one.
Favorite page: Dina seeing you know who, no, not him, her. That’ll make sense when you read it.Rating; 3.5 out of 5 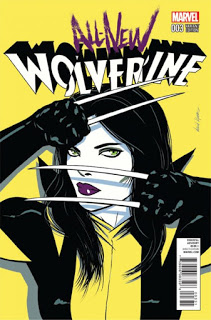 I thoroughly enjoy this comic. It’s a fast read and makes me want the issue to be longer. I like that it’s a basic action comic but has strong characters that I’m worried about as the story goes on even though they are part of the whole Wolverine family thus making them harder to kill. I am curious to see where the rest of the series will go and I hope to at some point possibly own a trade for this series so I can make people read it and hopefully enjoy it as much as I do. I also like that it feels like Orphan Black.
What I liked most:  X-23 Is a fabulous character. She makes the story for me.
What I disliked most: Like Black Magic, it went by so fast, I want more.
Favorite quote(s): ”How’d they find us so fast?”
”I don’t know because we’re driving a tank down the street?”
Favorite page: That car fight scene, I know it doesn’t narrow it down but you’ll know when you read it.Rating; 5 out of 5 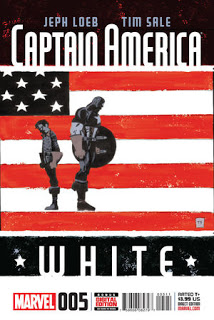 I need to stop reading this comic because it hurts at how adorable it is. I really love this series but as I’ve been told anything with a color in the title is probably really emotional. Steve and Bucky’s relationship in this comic is written so well. I want to shove the trade for this series at people and make them read it because I love the story so much even though I’m 95% sure I know where it’s going.
What I liked most:  That it feels like an old comic but looks new.
What I disliked most: That dramatic ending, it hurts.
Favorite quote(s): The kissing banter with Bucky & Steve over our lovely French ancient.
Favorite page: The kiss scene because of how Steve talks about it.Rating; 5 out of 5 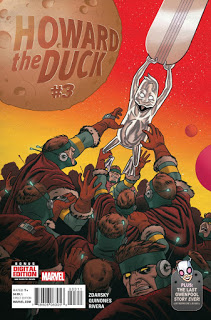 I don’t know how they did it but somehow Howard the Duck has become super emotional yet light hearted and fun all at the same time. It balances moments that could be super depressing and making it enjoyable to such an extant that I find myself laughing out loud without realizing it until I’m being stared at. I love the little specials at the end of Howard’s comics and the entire issue itself was a lot of fun for me to read this week. I hope the team keeps up the momentum!
What I liked most:  ‘Strange’
What I disliked most: It ended? I really liked this issue.
Favorite quote(s): ”Howarrrrd, there’s a lady you staring at meeeeee and it’s freaking me ouuuuuuut-”
Favorite page: It’s a tie between the Howard meeting Strange one and the opening scene.Rating; 5 out of 5 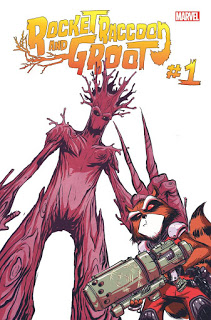 I honestly never thought I’d give a rats ass about Rocket Raccoon or Groot when I first saw Guardians of the Galaxy and yet here I am, madly in love with the both of them in the current comic and in the Guardians of the Galaxy series with Kitty Pryde and Star Lord as a Prince. This was a cute start that was nice and entertaining. It was funny like I hoped it would be but also had the satire humor I was looking forward to in this comic.
What I liked most: The ‘funeral’ scene!
What I disliked most: The ending because it made me sad..
Favorite quote(s): ‘Our names are on the cover, how bad could things be?”
Favorite page: The ‘funeral’ page acknowledging the fact the series has been around for 8 months and the moment when Rocket finds out the people he sent to jail/beaten shouldn’t have been sent to jail/beaten.Rating; 5 out of 5