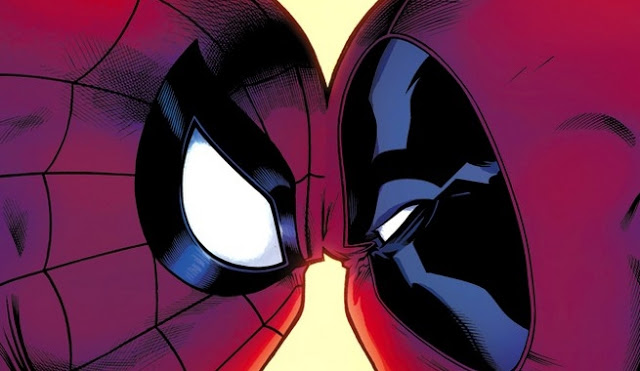 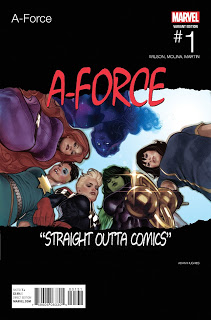 When I see ”Battleworld” all I can think of is the game I had on my iTouch that involved Battleworld? Singularity is adorable and makes me think of Starfire. It was a cute issue? It was pretty? I’m having question marks at the end of those facts because that’s how I said them out loud with the words ending with a question in my voice. I thought it was a nice issue and I’ll read next months because I’m all for more girl power and maybe it’s because I didn’t read the other series before this but I wasn’t 100% game with everything. I do however feel that as this series hits it’s stride, probably in the second or third issue I will like it more.
What I liked most: That character name page was beautiful, also helpful since I didn’t know everyone.
What I disliked most: It felt like a filler even though it was a set up for the new series.
Favorite Quote: ‘‘Maybe we should adopt it!”
Rating: 3.5 out of 5

Injustice Gods Among Us  year 5 #1 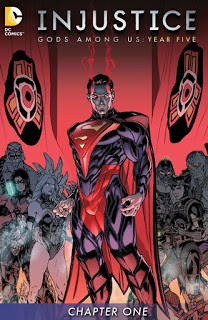 This was an interesting issue, it was fun and basically one big fight scene which I’m all for. I don’t know exactly what I was expecting but this worked. I like how the escape’s just surrender the instant Superman arrives to help Barry. I still don’t care for Barry being on Team Superman and that I’ve lost both Ollie & Dina, forever sad about that.  I am however for the Rogue Gallery helping Bruce and that he’s getting anyone to fight with him and Selina so go Bruce. What I liked most: Batman & Selina
What I disliked most: It felt like I was missing things.
Favorite quote: “Gooey center? That’s gross! And FYI you’re the ugly monster with the bad attitude and I’m the one who makes the clever quips.”
“Don’t flatter yourself. You’re not funny. You’re lunch.”
Rating: 5 out of 5 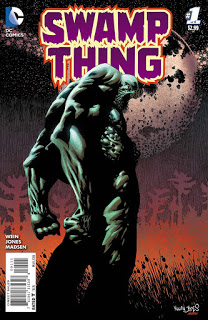 Angry Alec is my favorite Alec. His little rant to the alligator trying to eat him was frankly adorable. I mean yes, I did read it in a loud booming New Orleans drawl kind of voice in my head but still, it came off as adorable to me. I love Alec as a character, his story is so, well, basic but I love how much he cares about the Earth/Green. I simply am a sucker for anything involving the magick half of DC so bringing in Phantom Stranger made me gleeful since Alec is always so done with magick but magick people keep on bringing him back in. ”They’re eternal. They’ll get over it.”  This just ‘felt’ right to me and I’m so very happy I got to review it. I should have known last months appearance in Constantine was a sign that he had his own series or should have remembered it was happening. Nevertheless, I strongly recommend this comic!
What I liked most: It was the perfect blend of the old comics that I’ve read and the new things I love.
What I disliked most: It ended? I wanted at least another 60 pages for this story.
Favorite Quote: ”All you’re going to get is a mawful of muck. Which only serves to annoy me that I have to knit myself back together. And to tick me off big time that you even took the shot.”
Rating: 5 out of 5 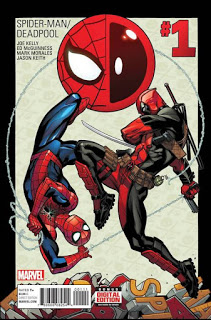 God I really do love Deadpool when he isn’t in his own series. Or should I say I just haven’t read the right solo Deadpool comic yet? Nevertheless, this was a hysterical issue.  Kat is the super Spiderman/Spiderverse fan that I know but I still enjoy him. Kind of. This was cute! I like the corny team up of Wade and Peter and can’t wait to see how the ending plays out next month. I think this will be one of those fun comics that I hope is longer than just five issues and goes on for a bit. It could end up being great or drag out, I don’t know but I do recommend this one!
What I liked most: The ‘literally’ being dragged into Hell moment.
What I disliked most: I don’t know, I really did enjoy it.
Favorite Quote: ”Don’t yell at me, that’s totally one of my turn ons!”
Rating: 4.5 out of 5 but that’s only because the poop humor isn’t really my thing.
Archie #5 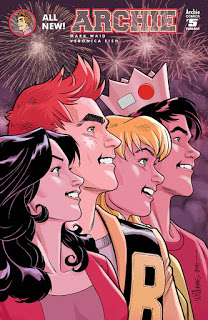 Now that I’ve watched all of Buffy the Vampire Slayer and almost all of Angel I can say that Veronica really reminds me of Cordy, or more so Cordy reminds me of Veronica. They are the classic rich bitch character that will at some point change there ways but it’ll take awhile, when it happens, it’ll be worth it, we just aren’t there yet. I also might have to use ”hurricane narcissus ” at some point in my life. Yet another thing I love about these comics is the little things in the back with stuff from the original comics. It just gives me a warm and fuzzy feeling even though I didn’t read the comics at the time of the issues we get at the end of the comic.
What I liked most: Archie’s attempt at his centipede joke.
What I disliked most: I kind of really wanted Veronica to freak out..
Favorite Quote: ”But what if they already hate me for being beautiful and rich?”
Rating: 5 out of 5, seriously if you aren’t reading this series by now, what is keeping you?

My Ranking for the week