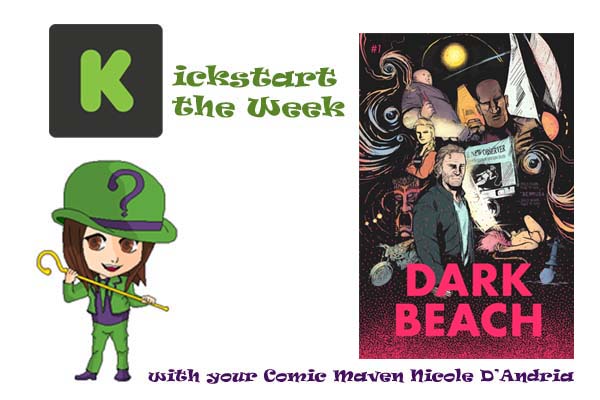 By:
Nicole D’Andria
Dark
Beach is a science-fiction noir story and the latest Kickstarter
to be featured on Kickstart the Week. I interviewed the writers and colorist about the society in Dark Beach, a world in which humans live in a large Iceland habitat thanks to the Old Sun.
The idea originated from the mind of Michael J. Ruiz-Unger.
He fleshed out the script with Tucker Tota. The artwork was illustrated by
Sebastián
Píriz with colors by Ray Jones. The official Dark Beach logo was designed by Patrick Hart.
The Old Sun started killing life on earth. For centuries,
humans have lived in a large habitat on the coast of Iceland powered off
geothermal energy from the Earth’s core to escape the sun’s wrath. At least,
that’s what people are told is the reason by the New Reykjavik Corps of
Engineers (NRCE), the closest thing to a government in this world.

Gordo is one of those people. However, he starts to
question what the NRCE says when he begins dreaming of the Old Sun exploding.
He listens to a police scanner, going to the scenes of homicides, taking
pictures of the victims and delivering them to his journalist friend in
exchange for Ghost Choker, a drug he’s become addicted to. However one day he
comes across a murder scene with Old Sun symbolism. Following his dreams and
the symbolism, Gordo starts to unravel the truth.
The creative team is trying to reach $1,300 by February 19th, 2016. They have already reached their goal (in under two days!), but there is still plenty of time left. The rewards go from $5 to $300. If you back the
project for $5, you will receive a digital copy of Dark Beach #1. At $7 you will also receive a behind-the-scenes
look of the making of the book including sketches, scripts and alternative
artwork. For $10 you get a physical copy of the book. You can pledge the project on their official Kickstarter page.
I spoke with writers Michael J. Ruiz-Unger and Tucker Tota,
as well as colorist Ray Jones.
Me: What inspired your idea for Dark
Beach?
Michael
J. Ruiz-Unger: My inspiration for Dark Beach came from a combination of a
couple different things. The first being 1940’s crime scene photographer,
Arthur “Weegee” Fellig. He has such an amazing array of work. On one side you
have the grimy New York City crime photos showing death by stabbings or gun
shots. Then on the other side you have these beautiful portraits of Marilyn
Monroe or Coney Island in the summer. His progression and variety of work
really struck a chord with me so I knew I wanted to somewhat base a character
around him. The other influence would be, at the time, living in New York
during the winter and having no job. I formed a very bad habit of waking up at
7 pm. For a couple weeks I didn’t see sunlight and that’s when the idea came to
me. Weegee + No Sun.
Me: Why did you decide to work with
another writer and how did Tucker Tota become that writer?
Ruiz-Unger:
After formulating the idea of Dark Beach and writing some loose
summaries and plot lines I needed someone else to kinda take those things and
run with it. Tucker Tota and I have collaborated on a few things already,
mainly short films, so the trust was there. I gave him all the notes and he
turned that into something I felt was on the right path. I’ve also known him
since the 3rd grade. 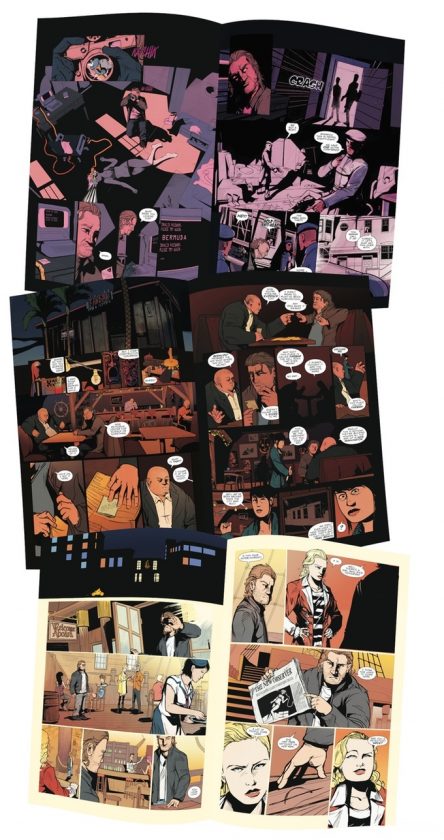 Me: What aspects of the writing do you
personally handle?
Ruiz-Unger:
I enjoy writing alone but I really
like collaborating even more. It’s a great way to check one another to see if
things really do work for a story or act. For Dark Beach, I would say building the story and its overall feeling
was my main handle. Tucker and I would talk for hours on the phone and he would
write something that night and send it my way. That cycle went on for a couple
months.
Me: Using only one sentence per
character, how would you describe the cast in Dark Beach?
Ruiz-Unger:
Gordo – An existential loner who
wonders why he’s an existential loner.
Duke – Gordo’s opinionated best
friend (not by choice) who will go out for beers all night but then go to work
at 8 am without having it be a big deal.
Lilith – She’ll outwit you and make
you laugh at yourself.
Julyus – He’s intelligent and
tactful and that’s all he would want me to say.

Me: What do you want people to take
from reading Dark Beach?
Ruiz-Unger:
I just want people to be
entertained. Take them away for 10-15 minutes. Imagine earth drifting in
space.
Me: What inspirational words do you
have for aspiring comic book writers?
Ruiz-Unger:
If you want to write or make
something then just do it. Don’t wait around for anyone to come to you or wait
to hear from a publisher, find your collaborators and get to it. If you’re a
writer find an artist or vice versa. Also, be very patient. Things WILL go
wrong but that’s okay.
Me: What aspects of the writing do you
personally handle?
Tucker Tota: On Dark Beach I handled the nuts and bolts
of the writing. I typed everything out, wrote the dialogue, the panel-to-panel
action. But after each draft of the script me and Mike would have long
conversations (like 2hrs) and we’d go over absolutely everything and then I’d
go back and type it all up.
Me: Since you received art samples
from dozens of artists, what was it about the art of Sebastián Píriz that stood
out to you and led to you hiring him as your artist?
Tota: The really
interesting thing is that almost all of the art samples were really really
good. Like we could have chosen any of them and the comic would have turned out
great. But the comic would have had a completely different style, a different
tone. So Sebastián’s talent was
amazing and his style matched the feel of our story perfectly. 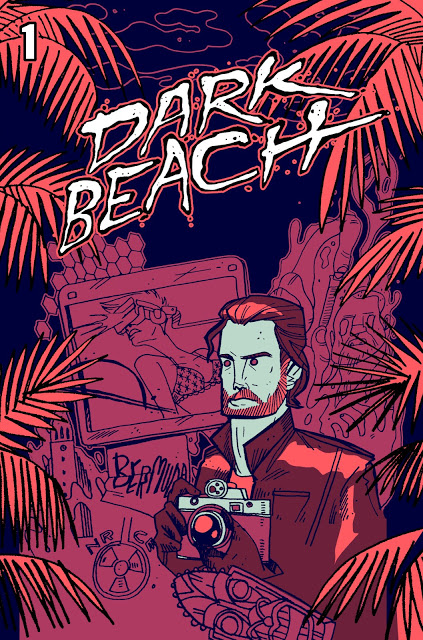 Me: What do you want people to take
from reading Dark Beach?
Tota: I guess all
writers just want people to keep reading their story and not get bored. So it
would be great if people liked it enough to grab issue #2.
Me: What inspirational words do you
have for aspiring comic book writers?
Tota: I’m an aspiring
comic book writer myself, so I can’t speak as if I’m super successful or
anything. But writing a comic versus creating it is a big difference. It has
been a huge learning experience bringing this comic to life. We especially
learned a lot once we started working with an artist and colorist. Sometimes
the artists will interpret a page way differently from how you imagined it, and
sometimes it’s a great surprise. But sometimes the page needs to be completely
re-done because you didn’t communicate something properly in the script. So you
gotta learn to really detail the things that have to be a certain way, but also
being ok with leaving certain things vague, to be interpreted by the artist’s
imagination. It’s a wonderful thing to see an artist take your words to a place
you never imagined.
Me: How
did you become involved with the project?
Jones: Mike and Javier reached out to me after seeing my work on
Deviant Art. They saw my portfolio and felt I was a good fit for the project. I
knocked out the colors on a sample page they sent and a few great and inspiring
emails later and we were on our way.
Me: How do
your colors add to this story?
Jones: As colorist, my goal was to enhance the grim nature of this
story and the artificiality of this world. I planned to depict a world
essentially on life support. Whenever possible I played up the unnatural
quality of the environment with very saturated colors. My work is typically
rich in color or dark in content, so I felt at home helping to construct this
story.
Me: Why
did you decide to become a colorist?
Jones: As an illustrator and designer I spend a lot of time in Photoshop.
It’s my second home. Also, being a colorist is an excellent entry point to the
comics industry. It felt like an obvious choice after reading the script. The
comic loving kid in me, anxious to get on board, wouldn’t have it any other
way.
Me: What
inspirational words do you have for aspiring colorists?
Jones: Be open to criticism. There’s a lot of technical info you
can only learn by doing and by finding a mentor. Don’t be afraid to ask for
help. Label your layers, save often. Never quit.
Me: The final date to pledge Dark Beach is February 19th, 2016. You can pledge money
to their Kickstarter here.
Do you
have a Kickstarter? Want to be interviewed about it and have the project
featured on “Kickstart the Week?” Let me know in the comments below
or message me on comicmaven.com.
Other
“Kickstart the Week” features:
The Gem Users
Seamstress
Assault on Fortress
Doom
100 Tears: The Comic