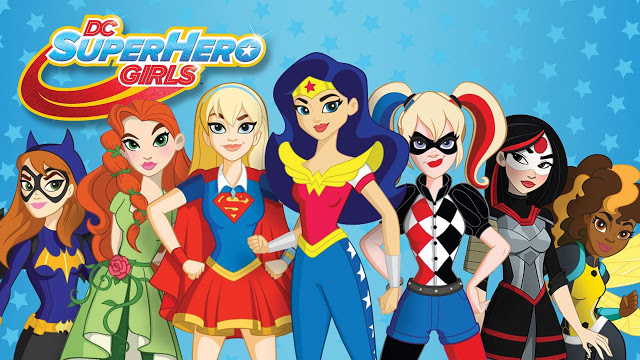 Tune into Boomerang on Saturday, March 19 at 10 a.m. for an action-packed hour with Super Hero High, a special featuring the stellar lineup of female Super Heroes from DC Super Hero Girls, the new comic universe from Warner Bros. Consumer Products, DC Entertainment, Warner Bros. Animation and Mattel. In addition to the special, exclusive shorts inspired by this fun and immersive world that encourages girls to discover their own super-heroic potential are also now available to view on the  Cartoon Network  video app.

Super Hero High is buzzing with excitement over new student, Supergirl. But when Supergirl crash lands into the cafeteria, it’s evident that though she has incredible power, she has a long way to go before she becomes a Super Hero. Too intimidated by the other supers to ask them for assistance, Supergirl turns to helpful I.T. girl, Barbara Gordon. Barbara takes Supergirl under her wing and introduces her to the sweet, old librarian, Granny Goodness. As Barbara helps Supergirl learn to harness her powers, Wonder Woman joins them and becomes a mentor and friend to Supergirl. Meanwhile, the Junior Detective Club (The Flash, Bumblebee and Hawkgirl) investigates a mysterious rash of security breaches centered around the teleportation “Boom Tubes.” Could it all be because of reformed Super-Villain and Super Hero High Vice-Principal Gorilla Grodd – or something far worse?

The DC Super Hero Girls world centers on the female Super Heroes of the DC Comics universe during their formative high school years—prior to discovering their full super power potential. Featuring a completely new artistic style and aesthetic, DC Comics’ icons such as Wonder Woman, Supergirl, Batgirl, Harley Quinn, Bumblebee, Poison Ivy, Katana and many more, make their unprecedented teenaged introduction. Each character has her own storyline that explores what teen life is like as a Super Hero, including discovering her unique abilities, nurturing her remarkable powers and mastering the fundamentals of being a hero.

About Boomerang
Launched in the U.S. on April 1, 2000, and now aligned across 13 international feeds, Boomerang is Turner’s global 24-hour, all-animation network for kids and families dedicated to showcasing both timeless cartoons from the Warner Bros., Hanna-Barbera, MGM and Cartoon Network libraries, as well as exclusive acquisitions and original productions from around the world.

Turner, a Time Warner company, creates and programs branded news, entertainment, animation and young adult media environments on television and other platforms for consumers around the world.

About DC Entertainment
DC Entertainment, home to iconic brands DC Comics (Superman, Batman, Green Lantern, Wonder Woman, The Flash), Vertigo (Sandman, Fables) and MAD, is the creative division charged with strategically integrating its content across Warner Bros. Entertainment and Time Warner. DC Entertainment works in concert with many key Warner Bros. divisions to unleash its stories and characters across all media, including but not limited to film, television, consumer products, home entertainment and interactive games. Publishing thousands of comic books, graphic novels and magazines each year, DC Entertainment is one of the largest English- language publishers of comics in the world.

About Mattel
The Mattel family of companies (Nasdaq: MAT) is the worldwide leader in the design, manufacture and marketing of toys and family products. Mattel’s portfolio of best-selling brands includes Barbie®, the most popular fashion doll ever produced, Hot Wheels®, Monster High®, American Girl®, Thomas & Friends® and Fisher-Price® brands, including Little People® and Power Wheels®, MEGA® Brands, including MEGA BLOKS® and RoseArt®, as well as a wide array of entertainment-inspired toy lines. In 2013, Mattel was named one of the “World’s Most Ethical Companies” by Ethisphere Magazine and in 2014 ranked No. 5 on Corporate Responsibility Magazine’s “100 Best Corporate Citizens” list. With worldwide headquarters in El Segundo, Calif., Mattel’s companies employ nearly 30,000 people in 40 countries and territories and sell products in more than 150 nations. At Mattel, we are Creating the Future of Play. Visit Mattel, like them on Facebook and follow them on Twitter.

Let us know in the comments what you think about this DC Comics & DC Entertainment Announcement and don’t forget to follow us on Twitter for the latest Previews, Reviews News and Interviews!