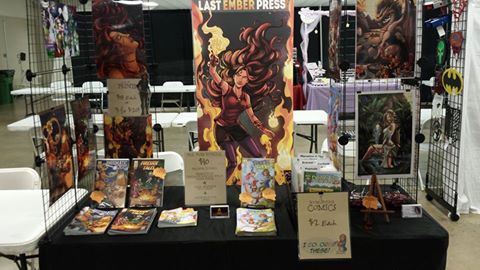 A new face to the comic publishing world, Last Ember Press (LEP) sets out to debut two new titles, FAERIE STORIES #1 and CHOCOLATE PANCAKE NINJA #1 at Heart of Texas Comic Con on March 11-13th, 2016 with Brant Fowler & Lisa Moore at table 67 in Artist Alley! But their fire will also be burning at Lexington Comic & Toy Convention where John Wilson will be on hand at table 702! 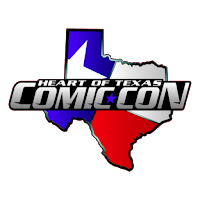 Faerie Stories centers around Alex, a young Faerie who is quite different from others of her kind. In her world, Faeries are rather solitary creatures.  They spend most of their time alone: they live alone, eat alone, work alone.  They are a bit skittish and some even afraid of their own shadow.  They live life very cautiously.  Alex is the exact opposite; she cannot understand why all of the other Faeries are of afraid of every little thing.  She loves to be around other Faeries (though very seldom gets the chance), so with the absence of other Faerie companions she has become friends with many of the forest animals.  In fact, her best friend is Kai, a woodland chipmunk. Her greatest desire is to find another Faerie that shares her views on the world.  Fairie Stories is a tale of longing, friendship and an example to live your life without fear. Unfortunately the first one they find is Tavin, who won’t even give them the time of day. 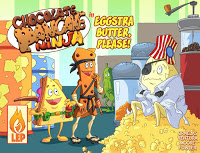 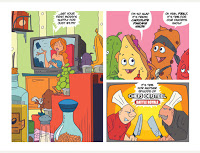 CHAR-MAGEDDON
Every parent thinks that their child is special, but for Emily and Mitchell Eden; special takes on a whole new meaning. Their daughter Charlotte is cute, precocious, and rambunctious and can fly and lift cars over her head! Everyone in Fairville knows her secret but bad guys beware! Cause trouble in her town and you will find yourself in the middle of a CHAR-MAGGEDON!

EEK! LI’L MONSTERS
EEK! A mer-boy, a wolf-boy, a young techno witch, a girl ghost, a flying monkey, a short vampire, a teen monster and an invisible baby all live in a house down the street! EEK! They are cool and funny and crazy but never scary! EEK! They have all these crazy adventures and kooky capers. EEK! It’s  EEK! LI’L MONSTERS! 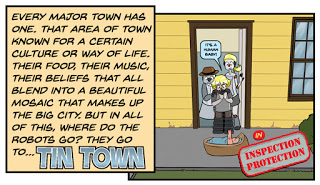 TIN TOWN
In every major city, you can find one. Those streets that seem to take those aspects from a far away place and bring it right here to America…within the space of a few city block. Every city has a Chinatown, a little Italy, a mini Budapest or a tiny Moscow. All cultures gravitate together, bringing their food, their beliefs and their way of life and blend into a beautiful mosaic that makes up the big city. But in all of this, where do the robots go? They go to TIN TOWN. What happens when a human baby is left on a robot family’s doorstep and they decide to raise it as their own in TIN TOWN?
FIRESIDE TALES #1
Char-Mageddon and EEK! Li’l Monsters Created/Written By: JOHN WILSON
Char-Mageddon Pencils By: RUDI SUCIPTO
Char-Mageddon Inks By: TASH GRASON
Char-Mageddon Colors By: LISA MOORE
EEK! Li’l Monsters Art By: EMILY RESINGER
Tin Town Created By: BRANT FOWLER & JOHN WILSON
Tin Town Written By: BRANT FOWLER
Tin Town Art By: JENNY POLDEN
Cover By: EMILY RESINGER
Letters/Logo By: BRANT FOWLER
Published By: LAST EMBER PRESS
Price: $4.00
24 pages, All Ages

Related Links:
About Last Ember Press
Last Ember Press is an independent comic studio founded by Lisa Moore, Brant Fowler, and John Wilson. Our mission is to tell stories in new ways from the unique perspective of seasoned (you know, salt, pepper, paprika) comic creators exploring the essence of the independent palate (sweet, sour, umami?). We strive to turn the old notions and concepts behind comics on their ear (blazing trails and all that – get it, “blazing,” “ember”…) and make books that are both familiar and innovative all at the same time. We hope you’ll join us on this crazy ride and we promise to only crash every other Thursday or when the squirrels come out (squirrel stew, anyone?).
To find a comic shop near you, visit Comic Shop Locator or call 1-888-comicbook.

Let us know in the comments what you think of this LAST EMBER PRESS  announcement and don’t forget to follow us on Twitter for the latest Previews, Reviews, News and Interviews!