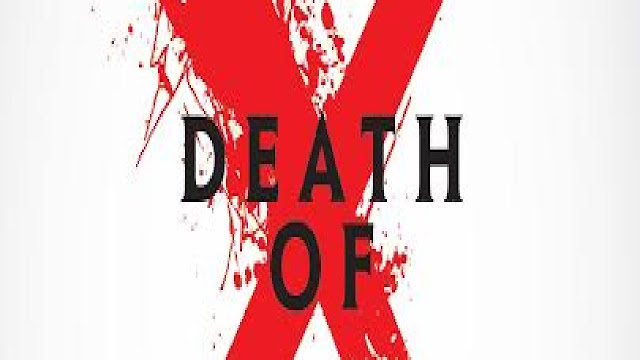 Marvel  is known for their teaser campaigns where we get a teaser image, and just a teasing phrase, or title and this time it is Death Of…. 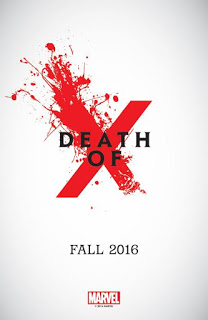 The image teases the words “Death Of” over what appears to be a blood splattered X, and that is all with no other information available at this time. We don’t know who the creative team is, or if this is a new storyline within an ongoing series, a new mini-series, or another event. With no other information theories and assumptions are bound to begin so….

With the “X” featured in the teaser it is safe to assume this is an X-Men related teaser.  Marvel  has multiple threads going on to which this can be played into, or out of. Currently we have the new X-wide crossover storyline Apocalypse Wars, which leads to the question: Could this really be THE Apocalypse for the X-Men? Civil War II is fast approaching with rumors that two deaths will occur, and the recently announced Civil War II: X-Men tie-in mini coming out, could an X-Man be one of those deaths? Then we have the ongoing sage of the Mutants vs the Inhumans with the Mutants being infected with the M-Pox disease that threatens to end their species. Could this be the first casualty of M-Pox?

That brings me to my final theory, or guess; Could this be the story where we find out how Cyclops died? Since the conclusion of Secret Wars and the birth of All-New, All-Different Marvel we have been told that Cyclops died in the 8 month gap between the two events. Fans have been speculating on how he died, with the only information we have is that it concerns the Inhumans. I would hate for it to take until the fall to actually find this out, but since Cyclops’ mask/visor was a “red X” this really could be what this is referring to.

But no matter what it is, stay tuned to Comic Frontline for more news on Death Of….

Kirby Reed was definitely my favorite part of Scream 4.

So glad that #Scream gave a small nod to the character surviving.

NOW GIVE ME SCREAM 6 WITH @haydenpanettier !!!!!

Sidney Prescott move to the side. Gale Weathers who? KIRBY IS THE BEST SCREAM CHARACTER! https://twitter.com/PhilFalcoWrites/status/1484228583233044498

Kirby Reed was definitely my favorite part of Scream 4.

So glad that #Scream gave a small nod to the character surviving.

NOW GIVE ME SCREAM 6 WITH @haydenpanettier !!!!!

These are the type of moments that make Rainbow Rowell one of my favorite comic book writers. Humanity always comes first!

Rainbow Rowell brings the same energy and love from her Runaways run to She-Hulk. The book embraces all that has come before, while adding new layers of character work and twists.