VIZ Media, LLC (VIZ Media) is the largest publisher, distributor and licensor of manga and anime in North America. Next month, on Tuesday, May 3rd, they offer a vibrant dose of Akira Toriyama’s most famous manga (graphic novel) series – DRAGON BALL – with the release of DRAGON BALL FULL COLOR: FREEZA ARC! 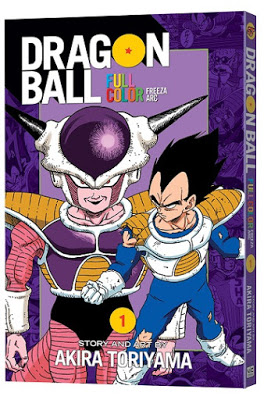 In this new edition of the classic action epic from the Shonen Jump imprint, we get a fan-favorite story arc of the series which will be presented in a vivid, full-color volume at a larger 6 5/8″ x 10 ¼” trim size. The volume is rated ‘A’ for All Ages and will carry a print MSRP of $19.99 U.S. / $22.99 CAN. The DRAGON BALL FULL COLOR: FREEZA ARC, Volume 1 will also release digitally on the same date, May 3rd, at VIZManga.com, as well as on the Nook, Kindle, Kobo, iBooks, GooglePlay stores, and comiXology. Future full-color editions of the 5-volume FREEZA ARC will be released on a quarterly basis.
After his epic battle with Vegeta, Son Goku and his friends must obtain the wish-granting Dragon Balls in order to resurrect their fallen allies! Their search will take them all the way to the planet Namek, where the evil Freeza and his minions are slaughtering the Namekians in order to fulfill Freeza’s wish for immortality. What will it take to defeat this great evil?
Volumes 1-3 of the DRAGON BALL FULL COLOR: SAIYAN ARC, the exciting preceding storyline of the classic and beloved series, are also available digitally and in print from VIZ Media.
Renowned worldwide for his playful, innovative storytelling and humorous, distinctive art style, Akira Toriyama burst onto the manga scene in 1980 with the wildly popular Dr. Slump. His hit series Dragon Ball (published in the U.S. as Dragon Ball and Dragon Ball Z) ran from 1984 to 1995 in Shueisha’s Weekly Shonen Jump magazine. He is also known for his design work on video games such as Dragon Quest, Chrono Trigger, Tobal No. 1, and Blue Dragon. His manga works include JACO THE GALACTIC PATROLMAN, COWA! And SAND LAND (all published by VIZ Media), as well as Kajika, Neko Majin, and an illustrated children’s book,Toccio the Angel.
For additional information on DRAGON BALL and other manga titles published by VIZ Media, please visit www.VIZ.com.
About VIZ Media, LLC
Headquartered in San Francisco, California, VIZ Media distributes, markets and licenses the best anime and manga titles direct from Japan.  Owned by three of Japan’s largest manga and animation companies, Shueisha Inc., Shogakukan Inc., and Shogakukan-Shueisha Productions, Co., Ltd., VIZ Media has the most extensive library of anime and manga for English speaking audiences in North America, the United Kingdom, Ireland and South Africa. With its popular digital manga anthology WEEKLY SHONEN JUMP and blockbuster properties like NARUTO, BLEACH and ONE PIECE, VIZ Media offers cutting-edge action, romance and family friendly properties for anime, manga, science fiction and fantasy fans of all ages.  VIZ Media properties are available as graphic novels, DVDs, animated television series, feature films, downloadable and streaming video and a variety of consumer products.  Learn more about VIZ Media, anime and manga at www.VIZ.com.