Kickstart your week with Amelia Sky #1, the story of a young girl fighting her way through a world inhabited by Shriekers: terrifying creatures that have been consuming all the energy of the universe. I spoke with the writer of the series, Jermaine Boyd.

Amelia Sky #1 is the first issue of a planned three volume horror science-fiction series. A young girl, Amelia, suffers from amnesia. She must make her way through an apocalyptic world filled with Shriekers and, possibly even more sinister, other survivors who think killing each other is the only way to survive. On her journey, Amelia will learn about herself and the power she holds within her—a power that may very well save the entire world!

The writer of the story is Jermaine M. Boyd, a scriptwriter and comic book lover. The concept artist is Mike Redman, a freelance illustrator and visual development artist. The illustrator for the series is Gwynn Tavares, the illustrator and inker of the graphic novel for the comedy troupe The Aether Brigade. The editor is M.J. Samm (“Andrew Jackson in Space”).

I interviewed the writer of the series, Jermaine Boyd, about the project.

Me: How does your story differ from other apocalyptic tales?

Jermaine Boyd: Amelia Sky’s apocalypse is very grisly, and dives deep into the effects of what the world would look like after an alien invasion. It’s a very dark and dystopian world now where not only do survivors have to deal with the Shriekers, but also they have to deal with other survivors who see the sparsely populated world ripe for the taking. The part that really differs from tales you have seen before is that Amelia Sky at heart is a super heroine tale. The readers will get to see Amelia grow throughout the series into the world’s first superhuman. The apocalypse is a great place to see an unlikely heroine come to life.

Me: Amelia is one of several strong female characters in your story. In fact, most of your characters in the story are women. Why is this?

Boyd: Yes, I’m very proud of that. When I was a kid I absolutely loved reading. No matter where I was I always had a book in my hand. My favorite stories were stories with female protagonists. Unfortunately, these stories were hidden gems when I was a child, just like stories featuring African American heroisms. It really disturbed me because often than not their plights were far more intriguing than any of their counterparts.

So, I decided at a very young age that I would be a writer who would help change the inequality landscape. It’s so amazing to see this happening now all over the comic book industry. I hope that I get to join some of the new emerging artists fighting for change.

Me: What can you tell us about Amelia and the other women of the apocalypse?

Boyd: Twelve year old Amelia is bold, strong willed and highly inquisitive. In the beginning of the story Amelia wakes up alone with no memory, no personality, only a small shard of her former self. This shard comes in the form of a deep inner fearlessness she is trying to wrap her head around constantly in the beginning and throughout the series. As she traverses this horrifying world looking for her parents and herself, the places and people she meets both give her a new personality and help her remember who she was before her world came to an end.

But who she was isn’t as important as who she turning into. This mysterious fearlessness is not just a buried emotion. It’s a presence that slowly unfolds to be a character all its own.

Eleanor Rigbi is the first character Amelia meets after she wakes up. Eleanor is a sixty year old, highly decorated veteran Special Ops Marine. Eleanor’s hard life led her to alcoholism, causing her to become a recluse. Amelia finds Eleanor in her darkest hour alone with her dog Ace taking shelter within their home. Amelia’s fearlessness awakens Eleanor’s, giving her hope, and at the end of the world hope is priceless. So, Eleanor is the essence of hope and will do everything in her power to keep that hope alive.

There are two other characters pictured in some of the ads for Amelia Sky, Abigail Rigbi, one of Eleanor’s daughters and Emily Winters, a young girl Amelia meets within the series. Both characters play central roles to the plot of the first volume. So I’ll just say that these women and the various other protagonist and antagonist characters of the series are going to be real. Saying that I mean they won’t be like female characters from apocalyptic stories of the past. Every female friend or family member from my past to the present has been extremely strong and able to take on anything that can imagine. There’s no reason to think they couldn’t survive on their own at the end of the world.

Me: Who are some of your favorite female characters in post-apocalyptic works—comics or otherwise—that inspire you?

Boyd: I love this question and I could write a novel and never finish the answer. But it is the main reason why I created this story. Looking at the past there isn’t a lot of strong female characters in post-apocalyptic works. Those characters were always given the short end of the stick. Those characters were always depicted as weaker, having to survive an apocalypse because of male characters being stronger than them. It wasn’t until recently that we started to see strong female characters in post-apocalyptic stories really shine. For me presently, there are two that come to mine: Furiousa from Mad Max: Fury Road and Sasha from the amazing The Walking Dead series.

Me: What can you tell us about Shriekers and the problems they pose for our protagonist?

Boyd: I had so much fun building the idea of the Shriekers, which I’m sure every science fiction writer can relate to. I’ve read and watched so many stories on evolution and alien life that it’s like the only thing that I think about these days. But the Shriekers can be symbolized as the essence of what we all fear. Not because they are enormous spider like creatures from the beginning of the universe but because their grisly, savage parts of us that evolution toned down.

To exist at the beginning of the universe requires a lot of energy. Any beings that could have existed would have needed to do whatever it took to survive. The Shriekers evolved only through highly aggressive survivalism. Their cravings for power made them galvanize their world in blood. After years of eating through their world’s food supply they began eating themselves, bringing their race to the edge of extinction. Right before the Shriekers were wiped from evolution they were visited by another ancient, terrifying race. This mysterious race will be known later on throughout the series but without giving any major spoilers. The unknown alien race sees an unstoppable force out of recruiting the Shriekers as an army. So, with that said, the Shriekers are brutal, mindless tools being used by something more ominous that are preparing to not just take over this world but the universe.

The Shrieker army is so massive and their brutal nature is unlike anything we’ve ever seen. So, in comes our heroine, the only person on Earth that will eventually match their brutality. The Shriekers are a major threat to Amelia in the beginning of the series just because she has no idea what she is or how strong she will become.

Me: The artwork for the series is very different and breathtaking. How did you meet and decide to work with the concept artist and illustrator for the series?

Boyd: In the beginning when I decided to take my stories to the comic medium, I wanted to find someone on the illustrator side that was like me, who thought like me. I went to DeviantArt and found so many independent and fresh artists that inspired me, and boiled it down to two hundred. Out of those I found my first concept artist Tyler Street. His amazing dark fantasy vision really gave a sense of what Amelia could be. Unfortunately, scheduling issues made us stop the process. So, I took Amelia’s vision down a darker, more realistic path. It led me to another brilliant concept artist, Mike Redman. Mike’s work caught my eye in an uncanny way. I would give him an idea and he knew what I meant like we had known each other forever. He truly helped create what Amelia’s world will infinitely be.

Mike, however, is a concept artist. His brilliant aspirations lie in film. The film world is a beast all its own. I know what it’s like to be on a film and have a big chuck of your life dedicated to it. So, Mike’s work within the project can only be very sparse. Anything that he does on this project in the future will be utterly amazing, and rare. So everyone should keep their eyes out for that.

Knowing this after the first Kickstarter, I wanted to make sure Amelia’s story had consistency for future issues. It led me to an inspiring illustrator I had been looking at, Gwynn Tavare. After talking to her and looking at her work, I felt she had the talent to pay homage to Mike’s work and give Amelia’s story what was needed. A comic artist’s vision and spirit for not just issue #1 but every issue in the future. Gwynn’s love for the story and breathtaking vision for Amelia is what is truly going to give this series its heart.

Me: What is the number one reason why people should back Amelia Sky #1?

Boyd: There are so many but the word hope is what I would tell any aspiring writer to keep by her or his side. I’ve been writing since I was a child. I’ve always known that I would be a writer. There have been so many routes that have deterred my path up until now. But hope has always kept me driven to the same destination, to the same goal. As long as an aspiring writer can keep hope by their side, nothing will stop them from becoming the writer they want to be. 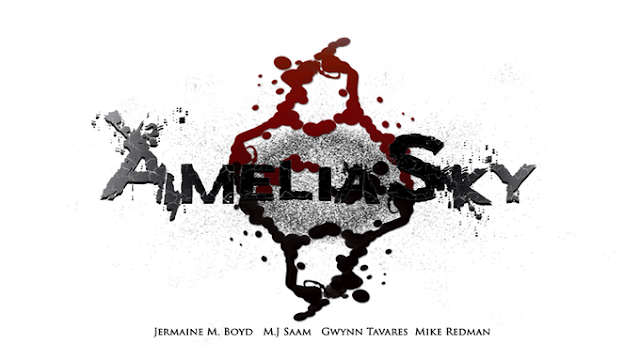 Me: Thank you for your time and the inspiring words Jermaine!

If you’re interested in checking out Amelia’s apocalyptic adventures, get on the ground floor with the Amelia Sky #1 Kickstarter.