Hi world, my name’s Mimi and here’s my reviews for some of this weeks new comics! Constantine the Hellblazer #11, Mockingbird #2, Black Canary #10 and Xena Warrior Princess #1. Part 2 of my Rapid Fire reviews will be out this weekend for Gwenpool #1, Gotham Academy #17 and Spider-Gwen #7!

Round One: Constantine The Hellblazer #11 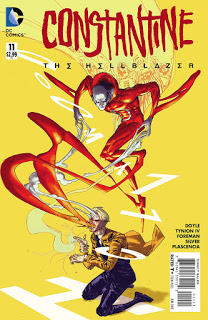 I LOVE THIS SERIES SO MUCH. It just SOUNDS like John Constantine every issue. It’s done so well! While I am excited for the Rebirth series, I am seriously going to miss the magick this team created. Ha, see what I did? ANYWAYS, this issue was BEAUTIFUL. It was filled with everything I wanted and more. Angels, Demons, Boston Brand and of course, John Constantine. I think my favorite thing about this series is how easily the team works together. The ‘new’ characters that are from John’s past are always put in so easily and I really appreciate it as such a fan of John Constantine.  I love that every time John has a monologue it’s necessary, it’s not just pretty words to transition pages.  John’s such an entertaining character but he’s also deep and of course, an anti-hero and I love how they played with that this issue in such a subtle way.

This issue had John off in LA looking for a new home/a home for every other magickal being from NY that’s being kicked out by the douche bag demon that I’m going to call Trump because let’s face it, that’s what he is. John talks to Gabriel (has a FANTASTIC entrance) and deals with the one and only Boston Brand.

One thing I truly want to commend the team for with this issue is how while we don’t know how John got to LA, we do know he did it with some badass magick and of course, his fabulous wit/knowledge. His entrance into Gabriel’s was AMAZING and I know I’m not the only one who wishes that I could do that little trick. The amount of magick John used this issue made me giddy and I’m so excited to see how this series wraps up. I just hope it isn’t a cliff hanger!!

What I liked most: The easy transition with the new art!
What I disliked most:  NOT ENOUGH BOSTON!
Favorite Quote:  Don’t talk about strangers where they can hear, kid. I had A LOT of favorite quotes, every monologue is pretty much a new favorite quote.
Rating: 5  out of 5 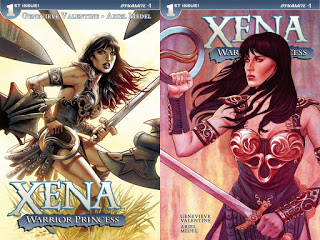 (Insert battle cry here). SO, I DIDN’T KNOW THIS SERIES EXISTED AND I’M DISAPPOINTED I DIDN’T. HOWEVER, I AM THRILLED TO OWN THIS COMIC! I am SO HAPPY it exists. Xena was a major part of my childhood and I’m one happy camper that now gets to rewatch it on Netflix AND read this fabulous new series that I damn well am going to review every month. It’s just so pretty and badass and EXACTLY what I wanted it to be. It was the last issue in Forbidden Planet when I stopped in for my issues of Constantine the Hellblazer, Mockingbird and Black Canary. I didn’t realize how much I missed Xena and Gabrielle together being badass ladies until today. It’s written so easily and I appreciate all of the effort that I can tell Genevieve Valentine put into it. Thank you, from the bottom of my 23 year old heart for making this beautiful series. Also thanks Dynamite for showing all of the covers in the back of the issue!


This issue had Xena, Gabrielle and the adorable little girls named Aya and Laila on a journey to get the girls back to there Aunt and mom in a village not far off from where Xena and Gabrielle saved them. It was a good issue that did’t feel like a filler, it established enemies again and showed Xena and Gabrielle being adorable with the girls AND some suggestive banter with Gabrielle and Xena involving some guards too as well as each other. Thanks for the subtext Xena team!

What I liked most: The seamless way they wove past and present story lines together.
What I disliked most:  Cliff hanger? I mean it’s not a complainant but I loved this issue.
Favorite Quote:  Did you really do all the things from your stories?
I did, the ones that won’t get you in trouble with your mother. But stories have life, and that’s up to the teller.
Rating:  5 out of 5 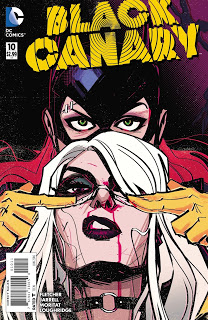 Yesss open with promotion for that amazing EP on Band Camp! I relate to Dinah Laurel Lance on a spiritual level and wanted to go out and punch something with her this issue. While I am also pumped for Batgirl and The Birds of Pray series thanks to Rebirth, I’m going to miss the crap out of this series. DINAH WEARING THAT MUCUS MEMBRANE SHIRT, THANKS GUYS! THANKS FOR MAKING MY LITTLE BLACK CANARY & JOHN CONSTANTINE SHIP FEEL MORE REAL. BAND FRIENDS!

ANYWAY, this was a fun girl power filled issue. I truly enjoy Babs and Dinah’s friendship, it just makes me so happy. These two have such a rich and complex history and it was done as usual, really well in this series.

This issue was Dinah back in Gotham with Bab’s kicking ass and looking into Dinah’s mom/aunt. Chaos of course ensued and the attack of NINJA DEATH CULT took place in a studio that Dinah’s mom was once in. This issue also had some great name drops that I’m looking forward to see play out in the last two issues!


What I liked most: The art change, I think it was super cool to see it switch up in the middle of the issue.
What I disliked most:  Uh that it wasn’t one of those bonus issue’s that has 60 pages?
Favorite Quote:   NINJA DEATH CULT
Rating:  5 out of 5 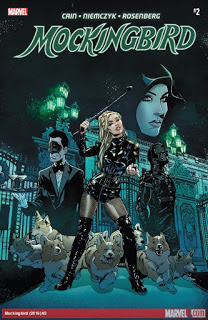 I WROTE A LETTER IN THE INSTANT I FINISHED READING ISSUE #1 LAST MONTH AND IT MADE IT INTO THE ‘MORSE CODE’ PART OF THE COMIC. I. AM. FREAKING. OUT. 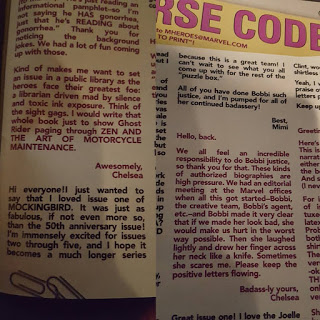 ANYWAYS, this months Mockingbird had Bobbi off saving Lance Hunter’s ass from the Hellfire Club, who was apparently on a mission to save the Queen of England BECAUSE OF COURSE LANCE GET’S JOBS LIKE THAT. I’M ALL FOR IT.

As I was saying, Bobbi saving Lance was priceless. These covers are FANTASTIC and the corgis got explained this month! I need these entire series out in print already so I can have the trade paperback and by have the trade paperback I mean a box full that I will give to friends to read because I can feel it in my nerdy bones that this is going to be a phenomenal series from beginning to end. The sass in this issue was off the charts. I worship the fictional ground Bobbi Morse walks on, as should everyone else.

Can we also get a shout out to the team for making Bobbi not be a twig? It makes me so happy to see her well, normal. IT’S JUST SO AMAZING GUYS AND GIRLS, AND NOT JUST BECAUSE OF MY LETTER THING.


What I liked most: OFFICIAL RESCUE TALLY
What I disliked most:  It ended?
Favorite Quote:  Remember that conversation we had about being more supportive? And Did you know the Queen can confiscate passports? True story.
Rating: 5 out of 5