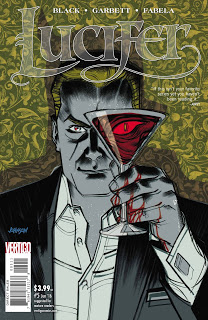 I JUST LOVE THIS SERIES A LOT OKAY?

I’ve read a majority of Holly Black’s books so it’s not that much of a surprise at how much I love her writing style for this series. I’ve thoroughly enjoyed the pacing of this series and even though I didn’t get to read issue 4 until the beginning of this month, it made me enjoy this issue just as much. I didn’t have to deal with as long of a cliff hanger. THIS ONE HOWEVER IS WAY WORSE THAN LAST MONTHS ON THE SCALE OF MIMI’S EMOTIONAL STATE CAUSED BY COMICS.

What I liked most: That the ending made me go ”Oh shit.” out loud.
What I disliked most:
Favorite Quote:What a predictably overblown entrance.
Rating: 5  out of 5 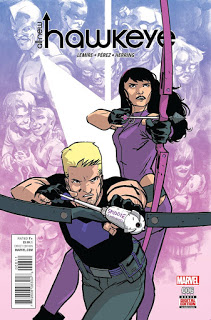 Anyone that has met me over the past two years has had to deal with my ever evolving love of comics. My top characters, at least the ones that I own a lot of comics from are John Constantine and Hawkeye. As you can see, I have a comic-book hero type.

This issue made me rather happy for once which was a pleasant surprise. The All New Hawkeye series has been a bit of a wild ride and not always in the good way. This issue however dealt with Flash Back Kate being taken by a ‘super-villain’ and present Kate, Barney and Clint fighting more HYDRA-esq goons. Flash-Back Kate plot line was pretty freaking sweet. I loved the pastel colors that they kept for all of the All New Hawkeye series that have been taking place since the end of the Matt Fraction and David Aja run.

What I liked most: The ‘Now’ Team ups during the HYDRA fight.
What I disliked most:  Honestly the little ‘tease’ for what’s to come being just a promotion for Civil War 2….
Favorite Quote: We’re going to Hawkeye their asses.
Rating: 4.5  out of 5 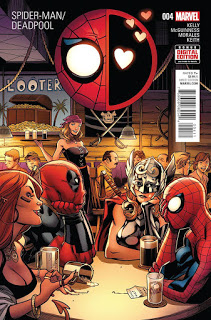 Tease the crap out of that SpideyPool ship writers with that opening page why don’t you? I LOVE that the cover eventually made sense to the comic.  This is one of those series that I didn’t expect to love but here I am, four months into it with a physical copy of each issue that I’ve been re-reading at various trips to and from school, still finding myself laughing at scenes I’ve already read.  It feels like a series that’s just being made to please the fans but I’m 100% okay with that because it’s humor I can get behind. It feels a lot like Monty Python humor at times so woohoo to that.
This issue was lighthearted up until that killer ending, ha, pun intended, that I can’t wait to loan to other people to read. It felt like I walked into a Fanfic but with pictures. Really priceless pictures I know I’ll see all over tumblr the next few days and am thrilled over that fact.

What I liked most: . The List.
What I disliked most: I honestly can’t think of anything.
Favorite Quote: That makes you Dead-Baby. Wait, that’s not funny.
Rating: 5  out of 5 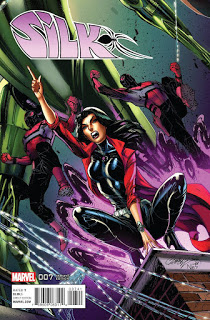 I fell behind on this fabulous series for issues 3 through 7 but thanks to that little blurb in the front I had no trouble understanding what was going on. It also helped that I read Spider-Gwen from last week. See, this is the type of spin off thing I can get behind.

I applaud the team for the Spider-Women crossover comics to make each character shine in there issues but to still let the other ladies shine. The fact Jessica is dubbed the Mom of the bunch makes me happy (even though I dropped her series after issue 1) and have been trying my damnedest to stay on top of Spider-Gwen. I’m annoyed that I fell behind on Silk but damn this was a great issue to get back into it.  Silk’s monologues are fabulous and I’m excited to see the rest of this weird and fantastic Spider-Women crossover event.

What I liked most: Cindy Moon, I missed this girl way more than I thought I would.
What I disliked most: Freaking Octopus.
Favorite Quote: See above, re: what will go wrong. and Okay.. Walking disaster checklist.
Rating: 5  out of 5 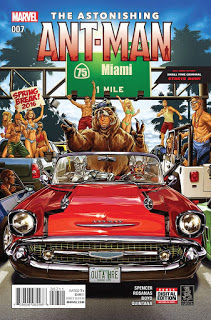 I’ve been reading the current Ant-Man comics to the best of my ability. Scott’s one of those character’s I’m now emotionally attached to thanks to Paul Rudd. Did I need to be emotionally attached to this little shit? No. Am I? Yes. The one thing that sticks with me in this issue and the rest of the Astonishing Ant-Man comics is the balance between light hearted humor and angst that is Scott Lang.

This was another cute issue. I fell behind on this series for the past two months but they mentioned things I knew about from two months prior so woohoo writing team? Scott still has his little business and like everything else in his life, it’s not going well. In the Now storyline’s Scott is in jail and that’s worrisome. I’m not looking forward to finding out how he got back put in jail for (insert number of times here). It’s another sassy issue and I think people should read it ASAP just to enjoy the sass in this issue with Scott and Power Broker alone.

What I liked most: Ant-Man VS Plant-Man.
What I disliked most: The lack of Cassie?
Favorite Quote: I know Power Broker’s here in town right now because he won’t stop spamming me with his stupid emails! And Finish this now– orrr get eaten. Sure, maybe that.
Rating: 4.5  out of 5 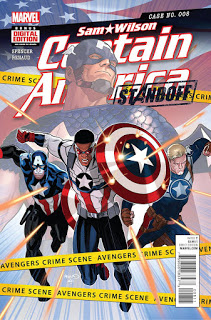 I giggled a bit at the Bucky and Sam opening only because it felt like the intro to Pokemon Gym battle start ups where it’s all dialogue heavy and you are just waiting for the fight to happen. Actually, the entire issue read like a Pokemon show down. I haven’t read a single Standoff part of the current Marvel run, at least none that I can recall over the past few months.

I say it every time I review a Captain America Sam Wilson comic but I love Sam Wilson. I need more Sam Wilson in the movie verse ASAP, I need a Sam Wilson movie god damn it or some sort of special. I just really need more Anthony Mackie as Sam Wilson in my life if I’m being honest. BUT ENOUGH ABOUT THAT.

This issue was the end of one Standoff arch and the start of a new one. Or at least the mention of the next one that I now want to read and am annoyed at that fact. This was one of those issues that I’m happy I bought it because I know a few people that will enjoy it that I’ll happily share the issue with. It truly gave me old Pokemon battle feelings this entire issue so I guess that’s why I didn’t take it all that seriously. This issue did however give me things that I wanted from Steve, Sam and Bucky which was the boys actually having a heart to heart. Thanks writers, I’ve been waiting basically 8 months for this.

What I liked most: That the Curator looked like Giles from Buffy.
What I disliked most: That the freaking ending made me wants to read the Standoff Omega issue. I DIDN’T NEED ANOTHER SERIES TO READ/WANT TO BUY!
Favorite Quote: Aw, this is heart warming stuff.
Rating: 3.5  out of 5

My Ranking for this week: