The tagline from  Marvel  reads “A Long Awaited Return….” while the quote on the teaser itself reads “I knew this was my chance to be a hero.” The image shows a simple gold cross star emblem and with the Avengers: Standoff stamp below it. With very little to go on, thanks again  Marvel  for allowing us to theorize. 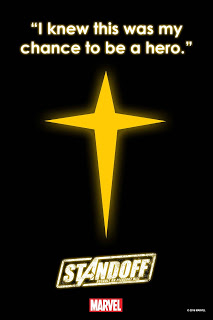 First we have to notice the focal point of the image, the cross star, this could be one of three symbols:

Nova: Currently Richard Rider was last seen in the Cancerverse after sending Star-Lord back home and Thanos hitching a ride with him. Rider is also a fan favorite and fits the “A Long Awaited Return….” tagline. The Nova star symbol is usually red, and has multiple points.

Quasar: Wendall Vaughn, Phyla-Vell, and Richard Rider all took on the mantle with Wendall Vaughn being the most known as Quasar. Giving that currently they are all gone they all fit the return aspect but only one I think would fall under the “A Long Awaited Return….” and that would be Richard Rider, who is a fan favorite. But there are two other factors to work into the equation, the quote “I knew this was my chance to be a hero.” and the Avengers: Standoff stamp, they could point to Wendall Vaugn who was an Agent of S.H.I.E.L.D. before he took on the bands and became Quasar. Out of all the star symbols this most resembles that of Quasar.

But no matter what it is, stay tuned to Comic Frontline for more news on this teaser.