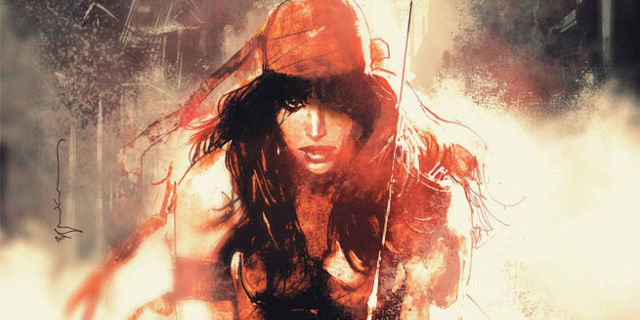 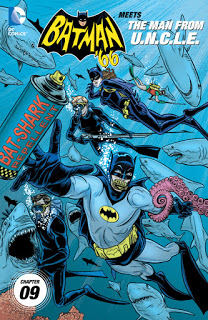 Oh man, Batman 66 makes me so happy, All of the psychology stuff thanks to Strange was  fabulous. I loved how trippy looking they made it look throughout the ending half of the issue. I don’t really have a lot to say for this adorable issue. It’s a fun Batman 66 series that I can’t wait to own in a trade paperback so I can make more people read it.

What I liked most: The psychology session at the end!
What I disliked most: Less Egg puns this time around.
Favorite Quote: Perception determines everything about group dynamics. 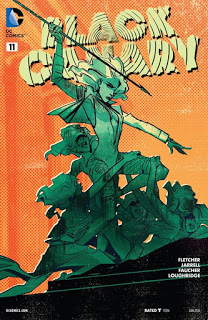 I’M WORRIED FOR DINA’S SAFETY EVEN THOUGH SHE IS CAPABLE OF HANDLING HERSELF.

It’s no secret that I love Black Canary like Jeremy. I mean what’s not to love?   She’s a girl on a mission, ready to kick-ass and take names. I LOVED this issue. The action sequences were beautiful and I still need to cosplay all of Dinah’s outfits from this series.

ANYWAYS, this half of the series, the past five issues or so have been Dinah dealing with her ‘Aunt’ and finding out more about her Mom’s past. It’s pretty crazy, typical comic drama but still fun. I’m all for characters having to look into the mysterious pasts of their parents. It just leads to some good old fashion angst and plot drama.  SHE JUST WANTS TO SAVE HER HER BAND FAMILY AND FIND OUT STUFF ABOUT HER MOM.

GO BUY THIS ISSUE ASAP SO I CAN SHARE MY FEELINGS WITH MORE PEOPLE!

What I liked most:  The Team Up factor with Babs & Frankie still going on.
What I disliked most:  THE ENDING BECAUSE I CAN’T REMEMBER IF IT’S A 13 ISSUE SERIES OR A 12 ISSUE SERIES.
Favorite Quote: Are you sure that’s all of them ladies? I’ve got another punch or two in me.
Rating: 5  out of 5 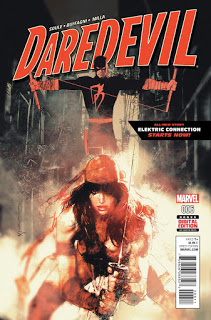 This was the issue of plot twists I didn’t see coming.
I’m caught up on this run  of Daredevil and I’m 95% caught up on the run in which Matt was in San Francisco for. Like Elektra, I have no memory of Matty boy erasing her memory so I don’t know if it’s something I’ve missed from the other series that’s being referenced or if the cover is true and saying ”All new story starts now”. Does it mean the new five issue arch or just this issue? Nevertheless, I commend the team for yet another beautifully done issue and yet again, keeping Matt so on point.
At this point I think most people have seen Daredevil season 2 so I just witnessed Elektra on screen again. I think Elodie Young did a fabulous job was Elektra, I’ll admit it was a blast reading this comic and ‘hearing’ Elodie Young’s voice in my head and the adorable Charlie Cox as Matt. It’s very easy to ‘hear’ those two in my head for this issue. Elektra and Matt’s relationship is always entertaining to me in the  comics so I’m thrilled she’s back in his life even though chaos is going to continue because of it. BRING IT DAREDEVIL WRITERS, I’M READY. (I think).

What I liked most:  That court room scene.
What I disliked most: The ending BUT ONLY BECAUSE IT MADE ME GO ”OH SHIT” on the subway at 7am.
Favorite Quote: Ah, so it’s one of those kind of nights. 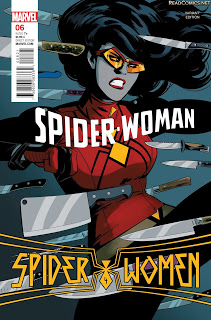 I dropped this series after issue #1 because I didn’t care for pregnant Jessica Drew. The first issue was cute but not cute enough for me to stick around like I have with the Patsy Walker aka Hellcat series.  This issue however is apart of the Spider Women event that I’m thoroughly enjoying, SO, to stay consistent with his little sublet of Marvel’s to fill the void while they do even more Civil War 2 series, I’m reading this baby here.

I really dig Jessica Drew in this Spider Women crossover. All of the ladies are fabulous and I love seeing them interact together. The fact they all are different ages and from different Earths make it entertaining for now and I’m happy it’s an ongoing thing. I just hope it ends on a strong note.

Young Reed Richards is a precious baby and needs to be protected at all costs, I’m worried about him getting hurt by the end of this Cross-over event.

What I liked most:  Jessica’s Portal scene was pretty funny, made me think of the National Treasure scene that was very similar to this.
What I disliked most: THE LADIES TEASING CINDY, SHE’S BEEN THROUGH ENOUGH.
Favorite Quote: Whoa, what’s with all the guns?
His wife gave them to me. Wanted them out of the house. Nice lady.

My Rankings for the week