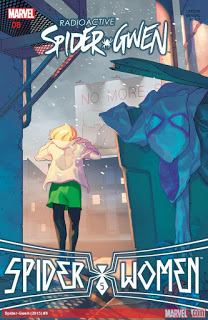 Since this is one of my first ‘events’ I’m getting used to how many issues are going on. I’m used to mini series, I’m used to on going series and I’m used to series starting and than getting holted. Spider-Women is a nifty event that I’m enjoying making my way through. I’m grateful for the check list at the back, it does make my life a little bit easier when it comes to reviews/reviewing .

One complaint I guess is the cover didn’t really fit the issue per-say. Gwen didn’t quit or toss out her uniform. Shit just got crazy for Cindy and Gwen analyzed her life through watching Cindy’s and feeling bad about Cindy’s life. I mean HELL, I feel bad about Cindy’s life both in the Earth-65 and the ‘regular’ Earth comics.

What I liked most: Earth-65 Cindy singing The Little Mermaid.
What I disliked most:  Ending was meh.
Favorite Quote: There’s so much in life that we take at face value. Like when a friend is smiling in a photo, and you are convinced yourself to their life is good. But what if that smile was just a fleeting moment? Just a brave face. 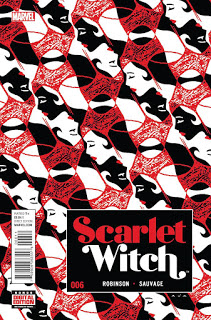 I’m starting to get annoyed with the art changing so much. It’s starting to feel like no one wants to stay on board so they jump ship after an issue. I love Wanda, I love her mission of going around and fixing magick but why is everything basically a one shot story? I know the major arc is going on in the background but I feel like most of the series is really pretty filler with inconstant art styles. I just want the same team of artists to stick with the series for a few freaking issues so I can feel something more in the series next to ”Oh Wanda looks pretty.”.

What I liked most:  That Musketeers reference.
What I disliked most: Naked Adele. No, not THAT Adele.
Favorite Quote: OUR ELITE ARMORED GOVERNMENT UNIT, THE MUSKETEERS IS OUT OF THE COUNTRY 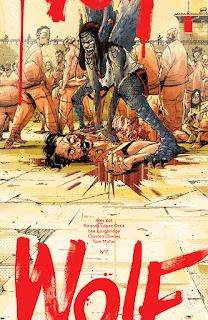 I MISSED YOU BABY, I AM HAPPY YOU ARE BACK AND THAT YOU TOLD ME ISSUE 8 IS OUT IN JUNE!

First things first, Wolfe, baby, I’m always so worried about you. This whole 5 years later thing feels like flash backs and I’m worried it’s all going to bite him in the ass even though I know it’s present apparently?

I really apprecaite the time it clearly takes to get this series done and while I want it monthly, I don’t mind waiting for it. This series hasn’t let me down at all since I started. I’d rather have a series be delayed but executed perfectly than spit out monthly and have a bunch of filler shit take place that isn’t doing anything for me but kill my wallet.

This issue had a subplot that I didn’t fully understand but I know is going to get explained eventually. I just hope it gets explained later before I forget it exists.

What I liked most:  That the issues are going to have freaking short stories in the back by new in comics. That’s so freaking awesome!
What I disliked most: It ended in an odd spot that I know is going to get explained in June but shit.
Favorite Quote: Obs-assed you could say. 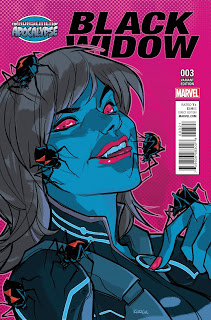 So, Natasha doesn’t really speak a lot in this series but DAMN she can fight. I mean, we already know/knew this but this team does such a beautiful job with it.

This is one of those series where minus issue one, each has had a pretty intense cliff hanger. It’s not that issue one didn’t have one, it’s just that issues two and three have had better cliff hangers. HOWEVER, my complaint is that the regular issue cover instead of the fantastic Variant, gave me major clues as to how at least one scene would take place in the issue so when something similar to it happened I wasn’t exactly shocked. I was just reading the issue wondering if the cover would come into play at all or if it’d just be a nice, dramatic cover that has nothing to do with the issue in my hands.

Over all, I do enjoy this series. Natasha’s not my favorite character but I throughly enjoy her. The art in this series I think is one of the main reasons why I keep on coming back to this series, and the fact I want to support as many of my favorite ladies series as possible.

What I liked most:  BALLET PAGE!
What I disliked most: The ending.
Favorite Quote: A scar is not the mark of a mistake made, Natasha. It’s another lesson that you are stronger than whatever it is that gave it to you. 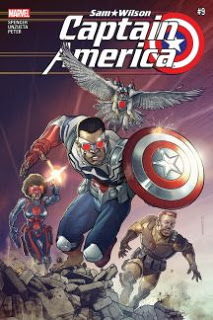 So I may have saved this until Thursday so I could read a Captain America comic on the day of me going to see Civil War. Ya know, because FEELINGS.

This issue deals with the after affects of the Cube de-ageing Steve from issue 8. Sam’s dealing with a lot of stress because of this and I still want to hug him over it. He’s been trying so freaking hard but society just doesn’t seem to want to let him have his moment. At least not until the end where he does some pretty epic heroic skills. I’m hoping it wasn’t some stunt that Steve somehow set up to help Sam save face to the public. Nevertheless, I thoroughly enjoyed this issue and I can’t wait to see that ending explained hopefully sooner rather than later.

Also, go Steve for learning from his mistakes! I’m happy to see the bromance that is Sam and Steve being well, a bromance again. SUPPORT EACH OTHER BOYS, PLEASE! It can only be dramatic or a plot device for so long.

What I liked most: MISTY BEING BACK.
What I disliked most:  Lack of Falcon?? He’s been built up but hasn’t been involved in the past two issues. I understand WHY but I’d like more of him ya know?
Favorite Quote: Get back in here Wilson or are you being a restless sleeper is gonna be one helluvan embarrassing deal-breaker. 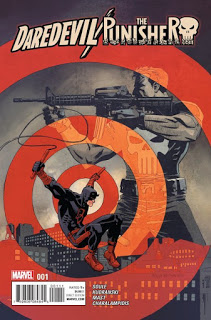 Gah, the art in this crossover series is FABULOUS. The team in this series is so freaking awesome and I loved this issue from start to finish. Matt’s sass level in this issue had me giggling on the subway while I read this issue and re-read it again at work.

The story for this issue is Matt’s case, Antov, this crazy horrible Russian mobster guy is Frank’s target. It’s what I expected the plot to be but WAY BETTER. It’s so much better than how I thought it’d be. I’m just so happy that this series exists and how the team clearly had a blast doing it. The art is so freaking cool. I love when the panels crossover into two pages. Gah, just go buy this issue, now.

PS: Bullseye is an adorable little shit and I want him to make it out okay in both the Daredevil series and this crossover series. I hope this is’t some five issue thing and lasts for AT LEAST 12 issues, somehow.  Please, please, please be like Spider-Man/Deadpool and be an on going series.

What I liked most:  Matt and Blindspot being adorkable.
What I disliked most: IT ENDED?! I WANT MORE, NOW.
Favorite Quote: Cn’t hesitate.. have to move everyone, all at once. WHOOPS!
Rating:  5 out of 5 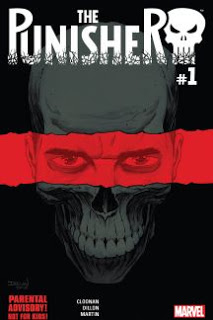 Well shieeet, this is one hell of an issue. I’ve never read a Punisher comic before. I know his backstory, I know what he can be like thanks to Daredevil season 2, I know he’s a hard boiled guy and has every reason to be the way he is. But DAMN, he didn’t even DO a lot this issue and his presence was so insane. It was a crazy issue and I’m forever grateful that it exists.

The Punisher isn’t an easy character to like, he’s got the token ‘male pain’ thing going for him but Daredevil made me love the character. I honestly wasn’t sure if I’d like the issue when I started it but I ended up enjoying the wild ride that it took me on once it started.The stakes have been set and I can’t wait to see where it goes from here on out. It feels a bit like a Rambo action movie but that’s jut me.

What I liked most: Frank’s super intense presence throughout this issue.
What I disliked most: THE FACE REVEAL BECAUSE IT FREAKED ME OUT ON THE SUBWAY.
Favorite Quote: Don’t be the guy who brings a cinder block to a gun fight.

Here’s my rankings for the week

One Thought to “Mimi’s Rapid Fire Reviews for: Daredevil/Punisher #1, Spider-Gwen #8, Wolf #7 and more!”