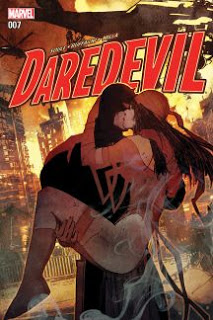 Damn Matt, why not have the weight of the world on your shoulders 24/7? I just wanted to hug everyone in this issue, damn writers. Right for the feels the entire freaking time.
I enjoy this series. I’m happy to finally be reading a Daredevil series from the start instead of catching up through trades. Not that I haven’t enjoyed the binge reading of the past few years of Daredevil and the classic run. It just ‘feels’ good to be reading a series from start to where ever it finishes.
Anyways, this months issue picked up after last weeks baby bomb. Chaos ensued, Matt caught up with Blindspot, they had an adorable moment that of course neither realized was adorable but I appreciated the Hell out of it and that ending made me sigh. I wish I could be in the writers room or email thread to see how they tossed around the ending and debated on doing it the way they did it. I wish this Elektra arch was a little bit longer than two freaking issues but that’s just me.
What I liked most: That two page spread for Elektra.
What I disliked most: Love/Hate the ending to be honest.

Favorite quote: Brace yourself Matt, this is going to h- 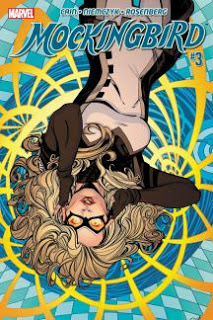 Let me continue to sing praise for the Puzzle Box that is Mockingbird, the short series that I REALLY WISH WAS A BIGGER SERIES. OR THAT I’M WRONG AND THAT THE FIVE ISSUES IS THE CURRENT STORY-LINE BUT MARVEL IS GOING TO SURPRISE US AND GIVE US MORE BOBBI MORSE??

Anyways, this was a cool issue of Bobbi helping a 12 year old girl that I can just FEEL is going to come back into play later on or one of her lil ‘friends’ due to Bobbi’s whole abilities that she has going for her in this series. I just can’t wait to have the entire series so I can re-read it a bunch and find new things each time that I didn’t notice before. I feel like this is going to be one of those series I’m going to want two copies of the trade paperback for. One for my own re-reading habit and one that I’ll be using as my ”read me” copy for friends. This is TOTALLY going to be like John Constantine Hellblazer City of Demons that I will use as a starting point to get people into one of my favorite characters.
What I liked most: SASS, SASS EVERYWHERE, CALLING THE WORLD OUT ON THE MIX SIGNALS GIRLS GET IN HOW WE ARE SUPPOSED TO BE.
What I disliked most: It ended?? Give me a 60 page issue asap. 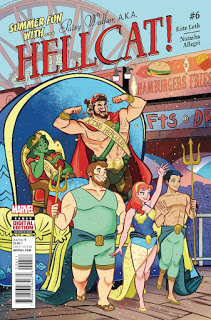 CHIBI, CHIBI EVERYWHERE. OH MY GOD IT WAS SO CUTE LOOKING I DIDN’T EVEN MIND THAT IT WAS JUST FILLER FOR THE JESSICA JONES AND PATSY WALKER ISSUE FOR NEXT MONTH!

This is one of those feel good fun series that I’m happy is a thing. I’m even happier that it’s on my pull list since I get a monthly dose of adorable Patsy. The sass in this series and random equality blasts always make me smile, always. No matter what, I know this series will get me to laugh and be happy. I think that’s really important to have so might as well be Patsy being an adorable little shit with She-Hulk kicking ass.
What I liked most: That the villain made me think of one from Teen Titans.
What I disliked most: That I have to wait another month for JJ & Patsy?

Favorite quote:  He was using the world ”murder” pretty liberally. 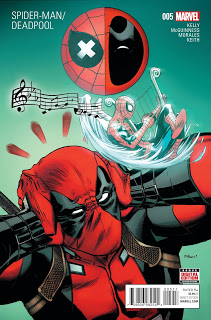 The trade comes out in August but I WANT IT NOW. I just really love the insanity of this series. I think it balances Peter and Wade’s personalities really well. I hope at some point it at least becomes an animated mini movie or some does a fan version, I don’t know, I just really want to see this series on the big screen somehow.
This issue showed us what happened to Peter after Wade shot him last month. Wade and his wife helped Peter save himself, kind of, and things got crazy of course. It was just what I needed to read after a long day at work to be honest. The goofy humor and just general fun of the series is just like Patsy Walker for me. Fun and easy to read and always something I look forward to reading.
What I liked most: How the team showed Hell.
What I disliked most: Peter’s guilt montage kinda.

Favorite quote:  ”You have death breathe.” 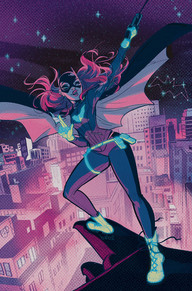 So this was a wrap up of the current Batgirl of Burnside run. It was also just a major promotion issue for the Birds of Prey and the other Rebirth issue. Not a bad thing but damn I kind of wanted more? It did show me more of Bluebird, Vixen, Black Canary, Spoiler and Bab’s teaming up together, which is really all I’ve wanted after they started to team up more in the past few months to take down Bab’s rivals.
I’m really excited for the Batgirl and the Birds of Prey series and can’t wait to see where it goes story line wise. It’ll be cool to see how everything plays out. I’m also hoping for more Batgirl and Damien in Gotham Academy. This issue did tie up some plot points with another cheesy villain but that’s okay, I’ll take it.

What I liked most: Dinah saying her and Bab’s would get matching ”B.O.P” tattoos.
What I disliked most: The villain to be honest.

Favorite quote: I’m totally buying a pair of yellow boots if we get out of this! 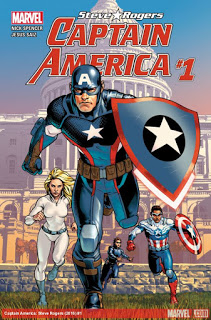 This is one of those issues that I’m torn at. I liked a majority of the story but I couldn’t really enjoy it because I knew how it was ending. Because how could you not find out about HYDRA Cap? This isn’t some Alternative universe plot point, it’s a ‘shock’ factor point that laughs at Cap’s creators. It laughs at everything that’s been built on Captain America, on Steve Roger’s shoulders and it hurts to see it. I’m just so angry over it I can’t even write a full review.

Favorite quote:  I couldn’t find one.

My Rankings for the Week