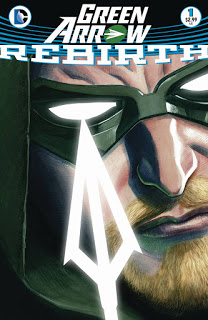 So, Rebirth has been established, it is a thing I am now reading and going along with because I don’t really have a choice. I mean I do, I could just stop reading but what’s the fun in that?

This was a cool issue, it wasn’t anything amazing, I liked it more than the other Green Arrow series but that’s not saying much. The art was way cool and the team nailed how I personally enjoy Ollie and Dinah together.

When it comes down to it, I thoroughly enjoy Oliver Queen as a character, what he stands for etc. I just prefer Dinah as a character. I loved what Andy Khouri, editor of Green Arrow stated on Twitter yesterday that ”Black Canary works without Green Arrow. Green Arrow doesn’t work without Black Canary.” High five Andy, thank’s for that.

This issue established a creepy villain that I know I’m going to hate for awhile, gave me some adorable Black Canary and Green Arrow moments and gave me a nice taste of what’s to come. Only time will tell if I will continue to enjoy this issue as much as I did this week/month.


What I liked most: Dinah calling Ollie out on his position in life.

What I disliked most:  Oliver’s costume to be honest.

Favorite quote:  What? I can’t hear you over the water running! 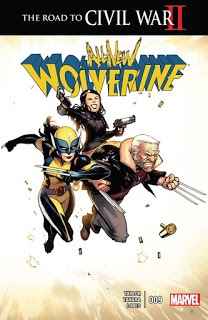 Oh Laura and Gabby, how I hope that if you appear in the MCU, you won’t be butchered by SONY/Fox. (I’m talking about you X-Men Apocalypse credit scene!)

Fin Fang Foom attacked the SHIELD helicarrier last month in NY and Laura jumped inside Fin Fang Foom. to go find Logan. This month we got to see Tony and Captain Marvel to come in and kick some ass along with the precious joy that is Gabby to step in. It was cute and apart of the Civil War 2 set up.

The All New Wolverine series has done a good job at keeping the series is something I can rely on to be a fun read with some good gut punches to my feels every month. I’m also all for the consistent ”MARIA, PLEASANT HILL WAS BAD!” tone the other characters get to have over it. Thank’s Marvel for keeping up with that, I appreciate it.

What I liked most: Gabby being a fan of Captain Marvel.

What I disliked most: Tony being in it to be honest. It worked but noo, let me have my girl power. 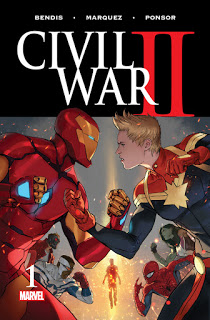 Here’s my instant reaction/thoughts on Civil War 2 issue 1.
What I liked most: Thor and She-Hulk arm wrestling during Tony’s speech.
What I disliked most: How come it has to be Tony VS Carol? If the Avenger’s team’s all updated why can’t the Civil War be two different people since we already have Carol as the Steve position.

Favorite quote: It’s a freaky, giant, big, giant celestial giant trying to destroy us. What else do you need to know? 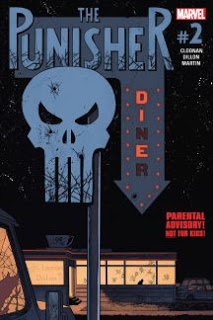 (Slow clap because the team did the Thing again). That ”Thing” being make me go ”OH SHIT” really loudly in public. This time in a park while I read this weeks haul. Damn guys, keep up the awesome job please!

I love that even though Frank isn’t in it a lot, his presence is still clearly IN the comic. Frank was in this issue more than last month which is fine with me, clearly, but I like how they make it easy to seel Frank in the series.

Last month Frank was just supposed to deal with a drug warehouse but it didn’t turn out that way. Shit went side ways and this month he’s on his mission to get the drug dealers again while still accidentally messing up the DEA Ortiz’ case against the drug dealer.

What I liked most: That ending, Jesus H Christ.
What I disliked most: THE FACE IS CREEPING ME OUT.

Favorite quote:  It’s one of those comics that has more action than dialogue so I don’t have a favorite quote actually. 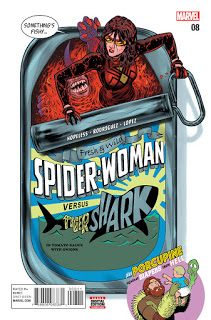 It’s official, I really like Jessica Drew as a character and I’m happy that the Spider-Women event made me get back into her series.

This was one of this comics that I did actually judge by the cover. I was worried I just wasted my money but ended up enjoying it. While I wasn’t ”impressed” if you will, by Tiger Shark, I did enjoy the chaos he called. It was stupid funny. I was really just in it for the cute comments from Roger about watching lil Gerry. Jessica has such a fun air around her and I’m happy she’s been able to do her own thing while being a single mom. While I was far from impressed with her first issue and dropped the series right away, I’m happy I picked it back up thanks to Spider-Women.

Favorite quote:  Look at you go, Giggle Gills. Who would have ever thought your bold JAWS 3D aesthetic would fit in so well on the Upper East Side? 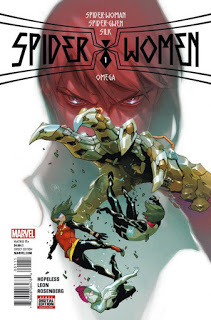 MY FIRST ”EVENT” IS OVER AND I’M SAD BECAUSE I WAS REALLY ENJOYING THIS LIL EVENT.

This was the end of the Spider-Women event I’ve been reading for the past few months. I really did enjoy the dynamic of Jessica, Cindy and Gwen together. They were a great team that worked well together even though they weren’t all found of each other’s choices as to how they handled what they had thrown at them. I’m just so happy that they all made it out okay in the end and left it open for another Spider-Women cross over event like this. The cover is amazing and I wouldn’t mind having it as a poster on my wall.

What I liked most:  The girls teaming up to fight Earth-65 Cindy.

What I disliked most: IT ENDED.