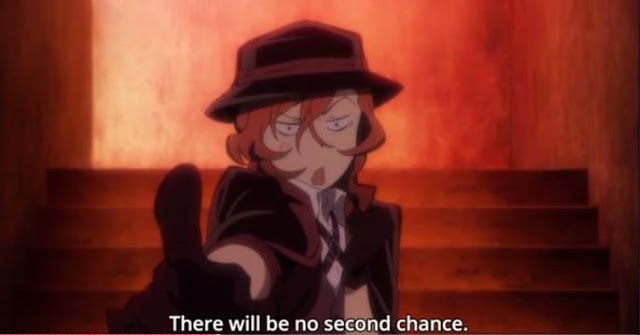 Oh boy, every episode of this gets better. I was honestly hoping this episode would be full of material since this was also going to be my first official post on Comic Frontline. Thankfully this episode provided for it! Anyway, though, since I have a lot to cover let’s not dawdle and get right into the beauty that is Bungou Stray Dogs Episode 10.

This episode made itself my favorite one in literally 5 minutes. We jump right into an epic fight with Dazai and Chuuya the moment the opening ends. Dazai has amazing dodge capabilities and I love his fighting style. It seems to be a “conserve your energy and never be afraid to dodge” sort of deal. Not only that, though, but Dazai’s fight style is very graceful and almost like dancing if he threw in some more twirls. When Chuuya punched him and his eyes widened though I got super worried. Dazai is a powerful guy, he doesn’t flinch easily so when he has any negative emotions on his face I became pretty…well horrified. Chuuya’s a pretty impressive fighter too, and his fight style seems to be “give it all ya got in one punch”.He sure didn’t give poor Dazai any mercy at least.

Dazai naturally is one clever guy as always and finds a way to worm his way out of getting killed, and manages to be fabulous and smirking all the way while doing so. In fact, he got himself caught on purpose and I’m honestly not the least bit surprised. That my friends is pretty classically Dazai and I should have seen it coming. It’s amusing to watch and the tone switches faster than anything I’ve seen before in an anime, even Bungou Stray Dogs which tends to switch tone a lot. At first, I was a bit annoyed cause I wanted to see more fighting but the moment it continued on I started laughing harder than I should have considering everyone in my house was asleep. It was mostly Dazai egging on Chuuya and I cannot do the scene justice even if I tried.

I will say this, though, Dazai has a very feminine looking body. I noticed when he bent forward he has an hourglass figure, curves if you will. I picked up on it since I was trying to pay a lot of attention to the animation in this part. When he was annoying Chuuya he even made his voice sound more feminine adding to it. Then Chuuya turns around and tries to out do and does an equally ridiculous sounding feminine voice and the screencap I chose for this week shows. Ahh Taniyami Kishou, you did you voice Natsuki Shinomiya one of my favorite anime character’s of all time and whenever you get cast into a new role you never fail to impress. Still getting used to you playing a delinquent/bad boy character though haha.

I laughed so hard my stomach hurt. Poor Chuuya, he tried. At first, I found him a little annoying, but I changed my mind, he’s quite the character and I hope we see him more. I can honestly see him being kind of a double agent later since him and Dazai have a frenemy thing going on. He seems annoyed by Dazai but similar to how Deppo is annoyed by Dazai. I honestly think Chuuya has a fondness for him and we’ll see him helping him out later and being tsundere to the core about it as well.

A full on “It’s not like I care or anything Dazai. I just want to be the one to kick your as in the end so I can’t let you die here, idiot!” Come on tell me you can’t see it. I’m honestly on the same wavelength as the shippers over at Tumblr. They would have chemistry if not for some the pesky ship ruining port mafia haha.

Speaking of them, though, the next arc is another great moment for Atsushi. He does something he typically doesn’t like to do which is kind of an avoidance thing. He likes to stay out of dangerous situations but today he finally got brave and stood up for what he believed in despite his fears. I get that what Deppo says comes from a caring place (yes, he found Atushi already detective agency works quickly) but I still don’t appreciate it. True, self-preservation is important to a degree, especially for those who have been hurt a lot like Deppo, but if you can help someone, you should do your best and I’m glad Atsushi saw that and thrust himself in despite the risks.

Kyouka also had her development and stood up against the crazy bastard that is Ryunosuuke. She also confronts her tormentor and stands up for herself realizing that her life is worth more than what she’s told it is. She almost gets called but Atsushi helps her out and what then ensues is probably one of the most badass fight scenes I’ve seen in awhile as well.

I can’t commentate much on fight scenes but I will point out that Atsushi has a cat like a fighting style especially when he jumps off things. It resembles a tiger for sure, kudos to the animators for doing that I enjoyed it.

In this fight, we get an interesting flashback, though. As it turns out Dazai helped train Ryuunosuke and is kind of the reason he’s such a brutal bastard. Haha…oops. I don’t like port mafia Dazai though I wonder what made him join to begin with and even more interestingly what made him soften? Hopefully, it was Deppo but I’m sure we’ll find out later.

The fight was badass we got to see some cool Ryuunsuke but in the end, it was Atsushi who got the coolness cake. He pulled through some pretty steep attacks and managed to defeat the little shit. Thank god, I’ve honestly had my fill of Ryuunsuke if he died I wouldn’t care too terribly on a personal level but on a plot level? OK…I might care a bit he is important.

What’s important though is that Kyouka is safe and they all got away. Atsushi did well this week and deserves some applause for that. Heck, he even got the rare unicorn fart that is Deppo actually SMILING. Hopefully, he respects him more now.

We were then introduced to a new villain in the final scene. Definitely important and maybe even the ringleader of the whole criminal thing in the area as whole! He kind of sounded like another character in the show though I’m not sure which one. I’m also intrigued by his ability, The Great Gatsby. I wonder what it is? As someone who read the book, maybe his ability to draw rich and extravagant things to himself? Create pleasurable illusions out of thin air to brainwash his opponent? (Gatsby was a rich and extravagant man who earned his status through questionable connections so maybe that’s what they’re going for?)

I hope I got close I did put some thought into that. I did like Great Gatsby and didn’t consider it a waste of time but if I got this right this book would come to use in my life to some degree haha.

Aaaaand that’s about it for this weeks episode. It was my favorite episode of the series so far and was actually a bit more quality then normal music and animation wise this week if you ask me! I look forward to next week immensely and enjoyed writing this a lot! I hope you enjoyed reading this as well, and let us all wait in quiet suspense for next week. I know it’s going to be hard for me to wait until next week after all that happened!

You shall see me on Friday again but who knows, my writing muse is higher so I might be starting a new fanfic this week~. I’ll be sure to show all of you if I do and I might even review a Spring anime show that I just finished in a few days if I can find some time to sit down and write it! I know I haven’t found the time lately, but I swear I will try to manage my time better and give you something more than a little personal blurb. If I can manage I promise to make the wait worthwhile!

With that, though, I bid you all adieu!