This week’s Kickstarter is for the gritty noir thriller Black of Heart. The graphic novel has been given high praise by numerous industry celebs including Robert Venditti (Green Lantern, X-O Manowar) and James Tynion IV (Detective Comics, Batman Eternal).

The Black of Heart graphic novel collects the five issues of the mini-series in one 180 page hardcover. The story takes place in 1949 New York City. Readers follow Detective Drake Harper, who is searching for the serial killer known as “The Vulture.” Along the way, Detective Harper must battle his own personal demons. 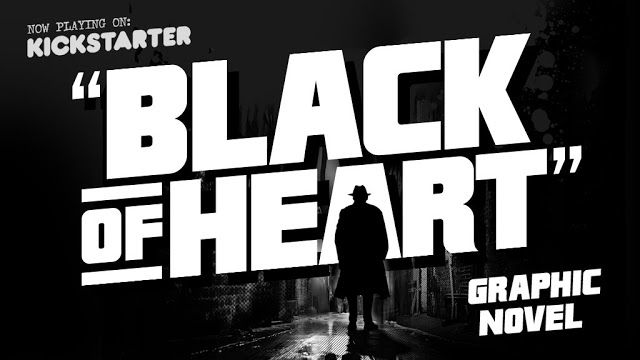 The writer of Black of Heart is Chris Charlton (Binary Gray, Open Tree, Sleepless). He was a musician before becoming a full-time comic book and screenplay writer. The artwork is done by David Hollenbach. He is a freelance illustrator who studied illustration at Pratt Institute in Brooklyn. The letterer is Brant W. Fowler (The Last Ember). The creators are working with Narrier Publishing (founded by Eric Adams and Jessica Whyte) to produce the book and send backers rewards. Narrier Publishing focuses on post-genre stories that are creator-owned including Lackluster World, Rumspringa!, and Goodbye, Weather.

The project is seeking at least $8,000 by July 1st, 2016 at 11:59 PM EDT. For $15 you’ll get a digital copy of the Black of Heart graphic novel and will be mentioned on the Thank You page. Other rewards include a bottle stopper and a vase in the shape of the black heart on the cover of the graphic novel!

Pledge money to the Black of Heart graphic novel on their official Kickstarter.

I spoke with the writer of the graphic novel, Chris Charlton, about his story.

Me: How does this noir thriller differ from other comics of the same genre?

Chris Charlton: Right away, David’s artwork grabs your attention and really pulls you in.  The work he’s doing is so vastly different from the majority of comics out there, it’s hard to ignore that factor.

Thematically, I’ve tried to avoid common tropes of the genre while maintaining a familiarity that is unmistakably “noir” through the artwork and that classic setting of late forties New York City.  It just feels like a living breathing space for these characters to haunt.  While this is a very personal story for both the detective and the killer, I like to use big set pieces and big reveals to give it all a very cinematic feel.  I’m a huge history buff and I love that there are pieces of actual history tied into the story.

I think when you combine all of these elements with a strong script and great dialogue, it helps Black of Heart really separate itself from the pack.  The response for the series has been outstanding and it’s been a real pleasure to see a passion project that I care so deeply about find an audience.

Me: How did you meet David Hollenbach and decide to work with him on this project?

Charlton: Once upon a time, I was at NYCC and met an incredible artist named Matt Dicke.  Matt did a cover for an anthology book I published through Assailant Comics called Sleepless.  At that time, he sent me a digital copy of a book he’d worked on and the other story in the book was a short done by David.  I was immediately blown away by his work and contacted him.  He had done some small comic projects, but was focusing primarily on magazine covers and artwork for interior articles of wide variety of publications.  His mixed media style has always been something that stood out in that capacity.

I approached him about doing some covers for an offbeat super hero series I’d written called Binary Gray.  He really just knocked it out of the park.  When I put Sleepless together, I approached him about doing a short five page story (based on the song “When the World is Running Down”, by The Police), and I was really curious about how his style would work sequentially.  It was spectacular.  A lot of fun and very different.  His style takes a little longer by normal standards because of his process, where you have a combination of collage, paint, pencils and inks, but when the idea for Black of Heart came together, I knew he was the right choice and he was also excited for the project, even though he knew going in it would be the biggest sequential project he’d tackled.

Me: If you had to describe Black of Heart using a song, which song would you pick and why?

Charlton: Great question.  Music is such a big part of my writing process and a big part of my life.  Each issue of Binary Gray is titled after a song and the lyrics tie in with the story thematically and all of that can be so much fun and add a lot of depth.  I rarely write with music playing, but I tend to build a soundtrack and listen to it when I’m in the car or off doing other things so I can continue to process the story in my mind and write out little notes in my notebook.  Things like that.

With Black of Heart, I had a lot of John Ottman handy.  Soundtracks for movies like The Usual Suspects or X-Men 2.  He does a lot of fun, punchy orchestration.  The soundtrack for L.A. Noire was also great.  I’m a big gamer and occasionally I’d pick it up and just drive around, taking in the ambiance of what it was like to live in 1940’s.

Specifically though, I’d have to go with a song that most people haven’t heard of.  I have kind of an eclectic taste and the song “Bright Lights and Promises” by Janis Ian was a constant for me. It was released in 1975 on the album “Between the Lines”, which is probably best known for the song “At Seventeen”.  It may not describe the story, but the music and lyrics really encapsulate the vibe and that sort of downtrodden loneliness that the protagonist revels in.  Give it a listen!  That album is a classic.  Sorry – I get really Patrick Bateman-y about certain music.

Me: Black of Heart has a very unique color palette, starting with a base of black and white with only splashes of prime colors with more saturation added to each chapter, ending in a full-color conclusion. Who thought of this idea and what does it bring to the story?

Charlton: We wanted to do something different and I always try to find different ways to set a project apart from either the genre or my own previous work.  I told David I wanted to do black and white with some really stark colors in there – red blood and the yellow cab, etc.  Once I started seeing his work on the first book, I knew we had something great and it just felt natural to take it a step further and increase those color palettes exponentially as the story went on and the mystery unfolded.  Issues 2 and 3 you start to see some purples and oranges, and I really left all of that to David.  His instincts are incredible and he did a great job with it.

When you have something iconic like Sin City, already out there, playing with color, you have to tread lightly and make good decisions.  Black of Heart is a very different concept on its own.  I think other than it being in the noir genre, there really aren’t many other comparisons to make, but it’s always something to consider and I never wanted anyone to say “Oh, it’s just like this…” or whatever.  That evolution came together so nicely and ties in so well with the revelations Drake goes through in his character arc that it never felt like a gimmick to me, and I think the response from the readers really verified that, thankfully.

Me: How did you get in touch with Narrier Publishing and choose them to help you publish the hardcover?

Charlton: Narrier was familiar with the book and approached me.  I’ve known their Co-Founder, Eric Adams, for years and he just has such a great brain for marketing and business, I knew it was the right choice.  For me personally, I’ve been looking to offload some of the business duties of running my own label, Assailant Comics, and free up more time for me to focus on writing and producing more of my own work.  I really like what Narrier is doing and the other books they’re publishing.  It’s a great fit and the perfect home for Black of Heart.

Charlton: Well, ideally to get the hardcover collected edition of Black of Heart!  Not only is it a beautiful book, but there’s an additional 7 page epilogue that was not included in the original series, never-before-seen artwork from David, pinups from some of the top talent working in comics today and an amazing foreword by horror author Mark Kidwell (’68/Image).  I’m really excited about the book and I’m hoping that’s contagious.  It’s just such a unique project.  I’m very proud of our work on it and there are plenty of cool rewards/incentives to go along with it.  I’m kind of in love with the black heart bottle stopper for our “Drunk of Heart” reward.  The great thing is that, even for readers who picked up the original issues, there are so many new elements and extras, this should feel like a “must have” edition. 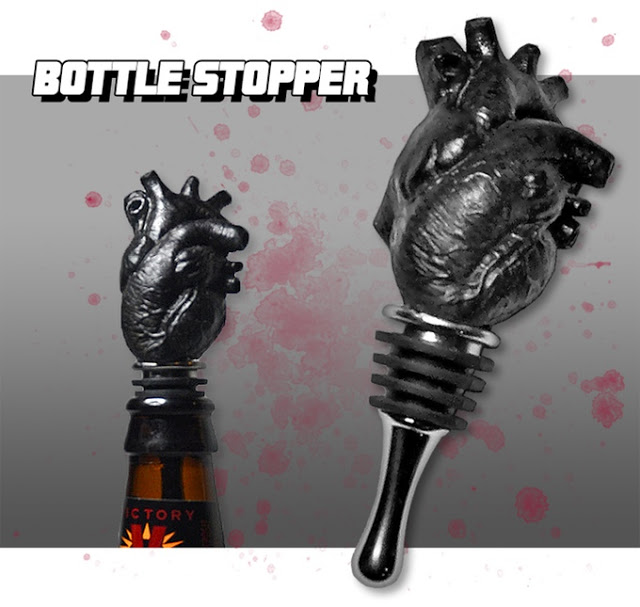 Charlton: I tend to approach it like anything else – the more you do it, the better you get.  The difference between having a story idea or starting to write and not finishing is persistence and a desire to see your story and characters come to life.  Once you get a taste of that, it’s hard to stop.

I think you have to lean on other people and ask questions.  When I started, I knew very little.  I was fortunate in that I knew how to get the ideas in my head out on to paper and that’s the first step.  Beyond that, the business end was a complete mystery and I had to figure those things out.  Without the help of other creators, I’d probably still be lost or, at minimum, making a lot of mistakes via trial and error.  The comics’ community is a small and welcoming place.  All it takes is putting yourself out there and there are a lot of resources and people willing to help.  When writers approach me at shows, I always give them my card and encourage them to reach out to me with questions because that’s what people did for me and it’s a great way to nurture people and hopefully get new books and stories out into the world.  That’s the point, right?!

Me: Thanks for your time Chris! If you’re interested in a noir thriller, check out the official Kickstarter for Black of Heart.