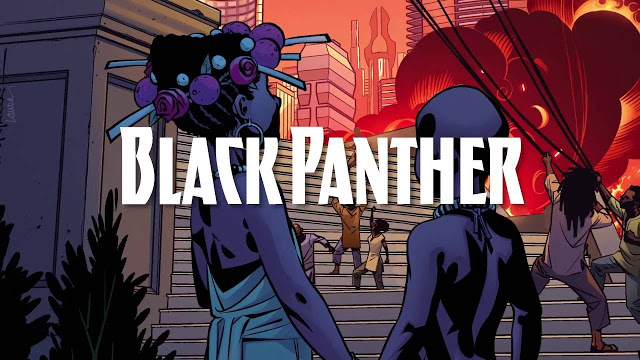 This new video series is designed to present the world of Black Panther to a whole new audience and will offer fans a monthly recap of the best-selling comic book series prior to the latest issue being made available and on sale.
Black Panther #1, written by The Atlantic national correspondent and National Book Award winner, Ta-Nehisi Coates, accompanied with outstanding art by Brian Stelfreeze, garnered international buzz and attention upon the announcement of this series in 2015, debuted as the best-selling comic for the month of April, and is on track to be one of the best-selling comics of 2016.
Continuing the excitement surrounding Marvel’s celebrated Super Hero T’Challa, the Black Panther, the latest episode of this revolutionary multi-artist hip-hop-inspired video series samples a brand new track, “Beast With It”, by Prodigy of Mobb Deep, featuring Mark the Beast.

“I am honored to be a part of another cool project from Marvel Comics and this new video series is going to be a smash. Black Panther has always been one of my favorite Marvel characters and the new series is destined to become a huge hit — Ta-Nehisi Coates really did his thing with this one!”

“Comics and music are two art forms that continually speak to one another, and with Ta-Nehisi and Brian Stelfreeze’s epic series flying off the shelves, we are doing just that. It’s our honor to partner with the legendary Prodigy for this latest installment.”

— Axel Alonso, Marvel Editor In Chief
This new video series has already reached global proportion and will further emphasize how  Marvel  is the premiere name when it comes to story-telling, diverse character development, and now, musical integration.
Black Panther #3 is available digitally through the
Marvel Digital Comic Shop and at all local comic book retailers.
To find a comic shop near you, visit Comic Shop Locator or call 1-888-comicbook.
For comics anytime, anywhere check out Marvel Comic Store and Marvel Mobile
Follow & Like On Twitter, Facebook, Google +, YouTube, Pintrest, & Tumblr