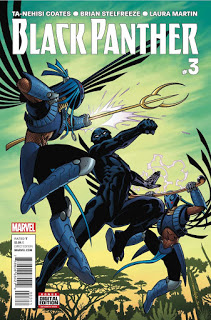 So, T’Challa has a lot on his plate. He’s got an entire nation pissed at him still and two other powerful enemies. The Midnight Angels have been off liberating Wakanda but in the process are making more enemies while saving the people. T’Challa is feeling all kinds of indecisive, he just really feels like shit until the end of the issue when he leaps into action. That action turns out to be one horrible trap and now my baby T’Challa has even more issues to deal with next month! I’M NOT READY.
This was yet another beautiful comic for the current Black Panther comic. I really appreciate all of the effort the team puts into it. You can really tell that they love what they do and understand the importance of Black Panther as a character and all that he stands for. The weight of the world is on this man’s shoulders and they show it beautifully.
If you haven’t read issues 1 and 2, I don’t know what you are doing. GO BUY THEM BOTH AS WELL AS THIS ISSUE, IT DESERVES TO BE READ!

I watched your father and Uncle struggle under the same weight. But T’Challa, I think you are stronger than you know, perhaps stronger than all of the Kings who have come before you. 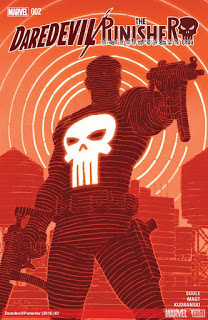 I feel like I’ve been waiting way longer to read issue 2 of this series than I actually have been. Nevertheless, this comic was worth the wait. I’m still 100% in love with the art and over all tone of this series. Frank and Matt shouldn’t get along, at least not yet. They should be butting heads and fists, pushing each other’s boundaries of pure stubborn ”men being men” that is established in this world. That’s exactly what we get in this issue and I’m thrilled by it. Of course I love the fun side of things, I mean my pull list is filled with lighter comics but I love series like this.
This team does a great job at showing how Frank, Matt and Blindspot feel about society and that pleases me to no end. I LOVED when Frank kept on pushing Blindspot to let him get rid of the Mafioso that Frank want’s nothing more to kill. I simply can’t wait to see what that fight will be like now since our lovely asshole is awkwardly stuck having Matt and Blindspot watching over him while Frank is temporarily being held back by the cops. 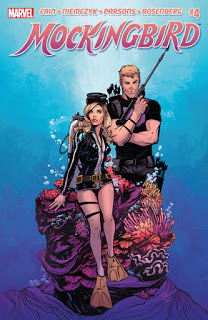 I just, I really love this series okay?  Each month this series has had me laughing really loudly in public while I sit in the park and read. Bobbi is just so fantastic, I wish I read comics with her in them when I was younger. I honestly feel like she would’ve made me want to be better at science when I was a kid.  I mean yeah, I can go back to school and do psych but my college debt is enough as it is.
ANYWAYS, BACK TO MOCKINGBIRD #4 AND ALL OF IT’S FABULOUSNESS. Bobbi Morse just spends this entire series slaying it, so of course she kicks some serious ass, again.
This issue had Bobbi and Clint IN A SUBMARINE, fighting T.I.M. a really funny A.I.M. knock off group of villains that have been doing tests involving the same chemicals that are inside Bobbi. Clint was sent off my S.H.I.E.L.D. to deal with T.I.M. and the two team up just how I wanted. Clint breaking noses, Bobbi slaying verbally and physically, it was everything I wanted and more. Seriously would lose it if I got to have the adventures of Bobbi, Lance and Clint together in at least one comic. 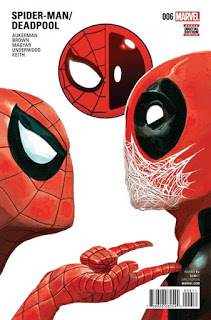 THE FACT THIS FILLER ISSUE OPENED WITH SPIDER-MAN AND DEADPOOL SAYING IT WAS FILLER HAD ME LAUGHING SO FREAKING LOUDLY IN THE PARK AND I DIDN’T EVEN CARE. This was one of those issues that under any other circumstances, any other series, I would have been so annoyed but this one pulled it off.
Spider-Man/Deadpool is just one of those series that I didn’t think I’d enjoy but here I am, months later, a happy owner of all of the issues.
This issue took place a few months before issue 1, it involves Spider-Man and Deadpool working together on making sure Deadpool’s movie is a good movie. It’s cheesy, it has hysterical humor in it that made me laugh way more than it should have.
I also love all of the crazy covers this series has. Over all, this was a funny filler issue that I’m happy exists. It was an easy read, like all of this series has been, and is a perfect pick me up after a long day at work.

Hmm, this could fill up twenty pages. Not a bad plot for a fill in issue, ya gotta admit! 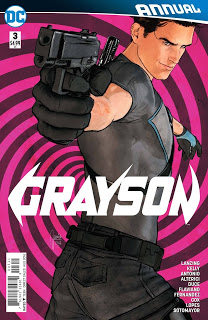 SO, I haven’t read a single Grayson issue but I saw the preview with Constantine being referred to as ”JOHN CONSTANTINE: Wizard. Like a very sexy, very angry Gandalf.” and made a mental note to go out and buy this with my haul for the week. I DID NOT REGRET THIS PURCHASE. I actually really liked this issue. I might just go back and read the other Grayson comics, maybe.
This was an Annual so it was longer than regular so totally worth the extra few bucks!  Basically Harley, John, Azrael, Simon Baz and Jim Corrigan got together to try and figure out who this infamous Agent 37 is that they all dealt with at various points. We got to see said various points WITH DIFFERENT ART FOR EACH FLASH BACK, and I got to swoon over how awesome this issue was. I really loved the fact they switched the art up for each person’s P.O.V. and how Dick had a bit of a Batman moment with each character. It was pretty freaking cool and I wouldn’t mind a few more issues like this.  They wrote my baby Constantine perfectly and that’s really all I need in life.
Dick Grayson is, well, he’s Dick freaking Grayson. He’s a badass with a heart and I’m really happy this issue did what it did.  Go read it if you care about the Batfamily  Boy Wonder Dick Grayson and want to get a chuckle at all of the flash back stories.

Look, I’m not one of those ‘heroes.’ When Constantine is on the job, sometimes the job only gets done by half. Innocent people die, which I admit is the worst, but there’s only so much one incredibly handsome can do.” 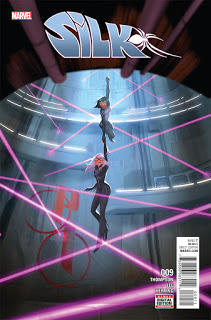 GIRLS BEING GIRLS, GIRLS COMMITING CRIMES AND BETRAYING EACH OTHER AND BEING BEST FRIENDS AND FEELINGS.
Sorry, had to get that out. ANYWAYS, Cindy Moon, like Clint Barton, needs a hug. She needs a hug and comfort from my girl Bobbi BUT THAT’S NOT HAPPENING AND I’M SAD BUT I GET IT BUT I’M STILL SAD ABOUT IT.
I rather enjoy the growing friendship that is Black Cat and Cindy Moon. Even though it looks like next month that’s all going to shit. This is one of those series that I thoroughly enjoy but sucked at keeping up with until the Spider-Woman crossover event.
Cindy’s been undercover, trying to infiltrate Black Cat’s thieving life style and she’s been doing as good of a job as she can. Her Evil Double did a much better job and now Cindy’s got to deal with acting like she’s just as good of a master thief as her Double was. Which  of course leaves to great Cindy monologues that I’m 100% for. Thank’s again Silk team for making Cindy on my long list of characters I want to be best friends with.

I’m not a master ANYTHING outside of disaster, is it too late to change my name to Master Disaster? I should just call Mockingbird back. But NOOOOO I just HAD to be Master Disaster.