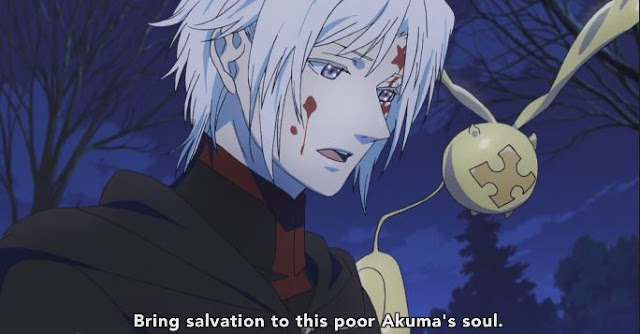 Bravocube Anime Review: D Grey Man Episode 1 – Does It Live Up To The Hype?
By: Bravocube

Wow, I was so excited for this! I saw the trailer the moment it came out. I wish I watched the series or at least looked around for a recap though because I was honestly a bit confused. It’s been about 5 years and I honestly forgot a lot which is uncharacteristic of me…but I did. So I guess since I’m so forgetful this will be a new experience for us all, isn’t that nice, haha.

The episode starts off by showing us all the characters again. I don’t remember if all of them were in the last incarnation of the show or which arc it starts off. Thankfully the show does drop some exposition for new viewers so you aren’t completely confused. We see each character again or at least I assume the important main characters. The new animation is very pretty and the art is as well! I will miss the old look of the show, though, I have to admit. Everyone looks great, but Miranda’s hair color changed. If I remember correctly it was really dark brown, not light like that. The music is also the same as the old show was which makes me happy!

The characters also all have new voices. Some of them sound familiar so some of them might be the same as before but I’m pretty pleased with all the new voices…except Allen. When I first watched D Grey Man, I watched the dub first. I cannot get used to Allen’s Japanese voice and don’t think it fits him at all and I hate that in the Japanese version, no matter what he seems to have a girly voice. You could say “Well he’s a teenager!” but Allen is supposed to be about 16 I think? His voice should have evened out by now!

As it turns out Allen and the gang have been away from the order for a long time doing missions. They are finally getting back and Allen is going to see his Master Cross. Allen has not seen him in quite a long time so this is a big deal. Them meeting I feel was way more satisfying than it was in the last show. Making it non-comedic and more serious was a good choice. Things are good and we get to see Allen and the gang being happy to be back and such.

Then we get a bit more exposition when Allen gets dragged off because he isn’t trusted because of something that happened before. I assume it was the piano scene but I feel it was more than just that. We learn he’s a vessel of the 14th Noah and essentially has this evil thing growing inside him. It was sweet to see Allen thinking back to his time with his father, and sad to see him cry. It sucks that Mana may have just been using him, though! Poor Allen can never seem to catch a break I feel bad for him. Although Mana seemed to be pretty morbidly obsessed with suicide to a degree…Dazai vibes anyone?

I hope that Allen truly can fulfill his promise. I am curious about what the 14th Noah is like but not curious enough to sacrifice my favorite character to find out. The dude who is pretty much imprisoning him though is such an asshole! Too bad he doesn’t kick the bucket in this episode…

I also never noticed that Lavi and Bookman could talk telepathically like that. I wish I could do that with people as well. I would do so much with that power but I feel like Lavi doesn’t really get to have much fun with that. Bookman would take things much too seriously. I also noticed that some flashbacks and clips in the opening/ending used the old shows style which is cool.

The last scene though is just a can of worms. As it turns out someone murdered Cross. This is going to be chaotic as hell when everyone finds the body. They may think Allen did it since he already isn’t trusted, or maybe one of his friends will be blamed. It’ll be interesting for sure and I look forward to it.

Overall I’m happy with this but…I’m still not getting that awesome feeling from the old one. It was good but…I was honestly hoping for better? I guess I hyped it up too much for myself. I’m sure it will get better but I still wonder what they’ll even be able to pull off in only 13 episodes. I guess we’ll all see what they do next week!

I hope you enjoyed this! I shall see you next week for Food Wars and D Grey Man again as per usual. I hope to post more on Youtube and such but honestly my mood hasn’t been the best lately and I feel very meh.. Hopefully, my mood will even out soon and I’ll feel more enthusiastic for lack of a better word.

I bid you all adieu until next time!