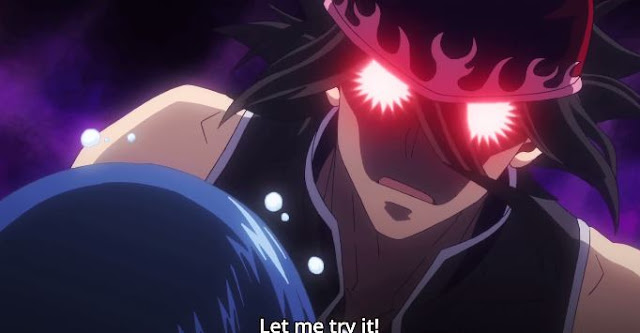 This episode was fun for sure! It featured a lot of my favorite character’s so there’s a huge bias on my end, I admit it but hey, I think it was an enjoyable episode either way! Let’s get right into episode 2, shall we?

Soma naturally is quite happy and boisterous about the fact that he won. Alice is unhappy about it even though she did that whole foodgasm thing. Erina naturally made poor Alice even more upset. Again, Erina’s a bitch and Alice is better in every single way. I really do hope we get to see Alice beat her more and more whenever I see Erina walk into my line of sight. Soma did win this one, though, so one point for him.

Then the next match starts! It’s going to be Megumi vs Ryo. These are two character’s I really like so I was so happy to see them both. I also felt conflicted because I would want them both to win! The food they would be making was ramen!

We flash back to a bit before the contest. Ryo already knows what noodles he’s going to use and has everything planned out. Megumi tests a few things in the kitchen and after getting a message from home and ingredients she decides as well! I love to see that Megumi has improved so much! She still gets anxious sometimes but I love seeing her become more confident in her cooking ability. She is another one of my favorite female characters and I was excited to see what she would make!

Then we’re back at the contest. Their friends are naturally cheering on and I laughed at the amusing pink banner and headbands that say “Megumi love.” on them. If I were in the series I’d wear that as well honestly. I love Ryo, but he doesn’t seem to need much encouragement. He seems the more internally motivated type of guy. The Italian brothers don’t seem to get it. They don’t understand  Japanese culture very well, and that was cute to see! I love when Italian characters are in shows but aren’t very stereotypical archetypes.

You could say because they are chefs they are a stereotype, but I disagree. They have a personality beyond that and are characters in their own right. I appreciate that a lot. I can’t wait for more episodes with them!

Back to Megumi and Ryo though! The two of them start cooking and I can’t help but notice that in this show they finish very VERY fast. I wish 5-star meals were done in the time it  takes in food wars! It takes less than 5 minutes to see the finished product!

A very important character development scene does happen here! We flashback to where Alice first met Ryo. The kid was already a cooking prodigy and running a restaurant by himself. It’s odd that the bandana seems to make his personality completely change. I wonder if he psyches himself out with the bandana so he can feel braver or something like that. Ryo is normally way more laid back and kind of submissive around Alice so you can see a huge change when he puts the bandana on. It comes right out of left field! I wonder how he does it, I hope they show that at some point.

The judges taste the food and we get to see the cooking styles of them both, I love seeing how each character has a different quirk and style. Megumi’s cooking is motherly and warm while Ryo is more in your face and pretty damn insane! I’m not completely sure which one the judges liked better! They all seemed impressed with both of their dishes.

Unfortunately, the episode ends before we can see. I would like to make a somewhat risky gamble and say that Megumi won. I can see Ryo winning more clearly, but I feel like for her character development it would be more appropriate that she wins. That and I think the judges may have been SLIGHTLY more impressed with her dish compared to Ryo.

I also wonder if this whole cooking contest will last the whole 13 episodes? I don’t mind if it does but it will make for an interesting series if it does!

That’s it for this episode! I hope you all enjoyed the post and look forward to seeing you all again on Wednesday for D-Grey Man. I bid you all adieu until then!