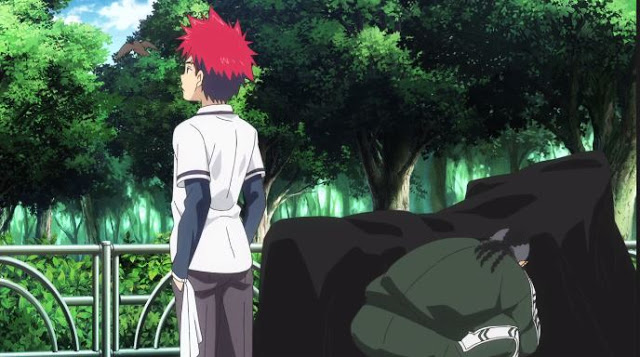 Ohh this was a great episode! It took me a bit to watch it and I winded up doing it a bit late but it was worth it once I finally got into the mental state to sit down, relax and watch it! Let’s get right into episode 3!

Starting off where we left last time, Ryo wins against Megumi. I honestly saw it coming to a degree I was just super biased and wanted her to win more, which is why I went with it even though I knew it would be the other way around. Naturally, when I saw this I told myself “Oh god here comes another Megumi self-loathes arc-“

Thankfully that didn’t happen. She took her loss pretty gracefully and was more intimidated by Ryo if anything. I’m glad she’s OK and not too sad about it. The even more amazing thing is that the headmaster of the whole organization sees potential in her and the rest of the class! All hope is not lost thankfully! Miyoko also was proud of her! I wonder if we’ll get to see more of her, I’m curious about her for sure!

We see 3 characters all determined to prove themselves and telling themselves the same thing. 2 of them are Hisako and Akira, the ones who face off this episode but another one is Takumi who plays more of a role later in the episode. I love Akira’s relationship with Shiomi. They seem to inspire each other so much and make each other happy, definitely a friendship to look to as a good example.

We are also reintroduced to another character that Soma has a bit of trouble remembering at first. His name is Subaru and he’s pretty much a dude who looks like a big bad scary biker, but he has a more sensitive side than you would expect from a guy like him. His quirk with food seems to be he is very detailed! I really like this guy! I hope we see plenty of him in the future.

We see Akira and Hisako get in the ring. They trash talk each other a bit. Their challenge will be to create a foreign dish for the judges and they get to work. Unusual for Akira we don’t see him use spices so much. Meanwhile, Hisoka beheads a turtle in front of the entire audience and uses it’s freshly killed body in her dish. Naturally, Erina’s psychopathic stalker enjoys this. I know that if you’re in cooking at this level your used to it but I don’t know.

Hisako annoys me almost as much as Erina so I already have a biased against her. Watching her kill one of my favorite animals didn’t help my opinion at all, just saying.

Meanwhile, we cut back to Soma and Megumi. They aren’t in the ring and actually watch it on TV with Subaru and Takumi. As it turns out Subaru is a bit obsessed with Takumi. Knowing this show he isn’t a serious stalker per say, most likely he just wants to watch him cook and know him better so he can find Takumi’s weakness. That’s what I’m getting from that at least.

We cut back to the competition and the dishes are coming together. We see Hisako’s resolve but I honestly still don’t pity her. She still emulates a terrible person and I honestly don’t care how much she loves Erina. I’d still rather see her fail.

The judges love her dish and the headmaster loves it so much he sees a vision of her in a Godzilla outfit. Her hamburger looks somewhat appetizing but I still wouldn’t eat it. I love turtles too much it would pain me. Despite how well she seems to do though Subaru predicts that Akira will be the winner of this fight.

Akira finally releases his spice talent upon the audience! He enchants everyone in it and his burger/kebab thing looks absolutely delicious. I would probably eat that for sure! He won in my book the moment we saw his dish. He blows the judges away and Hisako is completely overshadowed by him and loses the match by a landslide.

She runs away from Erina in shame, but I don’t know why she was so worried. Erina doesn’t seem upset with her at all, more sad and concerned if anything. Jun is also proud of Akira! I’m glad he won not just because he’s my favorite of the two but because of that cute scene!

It’s almost time for the fourth match. Before that can happen Takumi promises to beat Soma when he gets the chance. He also confronts Subaru about his stalking. This scene was a bit creepy, especially Subaru’s very large tongue and that creepy look he gave. He also spits on Takumi’s tool which was pretty gross and unsanitary. He provokes Takumi by insulting his brother and calling him a second-rate chef. This scene was so full of tension I could feel it radiating off the screen!

It turns out the 4th match will be postponed because Subaru has challenged Takumi to a duel! A shokugeki if you will! Everyone is shocked and poor Isami seems terrified. I love Isami so I don’t want to see him so sad. For his sake, I hope Takumi wins! That and since I’m Italian I feel more obligated to route for the guy.

Unfortunately, the episode ends there. Things were building up so I was disappointed it did but each episode of this is better than the last and I’m excited for the next one and I’m sure you all are as well with all that drama that went on this episode!

I shall see all of you in a bit for D-Grey Man. Now that I have access to Frontline Fiction, I might finally put up some writing as well!

I bid you all adieu until my next post!