Hi World, my name’s Mimi Schweid and here’s my reviews for The Hellblazer #1 Green Arrow #3, Batgirl and the Birds of Prey #1, Wolf #9, All New Wolverine #10, Patsy Walker AKA Hellcat #8 and Betty and Veronica  #1 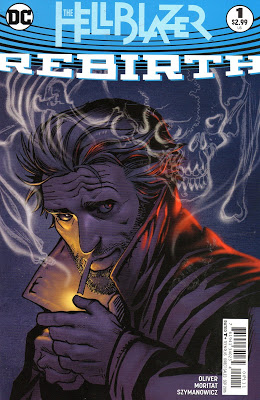 OH JOHNNY BOY, you little shite. If you’ve been reading my reviews for the past year at all, you know/knew I truly enjoyed the Constantine the Hellblazer run by Ming Doyle & James Tynion IV.  This however was also just as amazing as Ming & James run.
It just ”felt” good to have a British guy in charge of John once again. One that already wrote him before during his Hellblazer days for a special called Chas the Knowledge.
The art grew on me throughout the issue, I was mainly ”fangirling” over how British John sounded again and the fact he was in London again, dealing with an asshole demon (who he called Laughing Boy) and had some bromance moment with Chas and once again had a curse on him. It just felt really good and I’m happy Constantine survived the Rebirth process.

If Mercury hadn’t shown up, would I really have stood by while eight million souls were condemned to Hell? Well, that’s something you’re gonna have to stick around and find out for yourselves. Or not, because, quite frankly, at the end of the day, do I strike you as the kind of guy who gives a fuck? 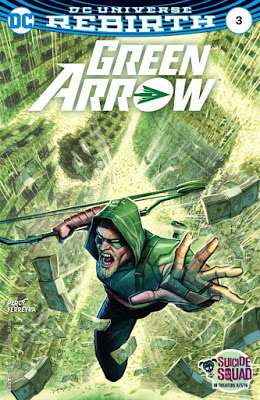 TRANQ ARROWS THAT CAUSE INSTANT NIGHTMARES? OLLIE! ISN’T THAT A LIL MUCH FOR YOUR OWN SECURITY? I did like that Ollie commented that he’d pay for everyone’s medical bills once he got all of his money back.
Oliver is dealing with the typical rich boy plot line I think all super rich characters have to go through a few times. All of the money goes out the window, friends and coworkers say ”peace out” and they have to look at there life choices and evaluate them. Oliver just so happened to be almost killed to have this all happen to him. Dinah’s off on her own mission to figure out what the hell is going on (and of course going straight to the enemy like the badass bitch that she is) while Oliver fights his enemies and gains a few more in the process.
This is a fun take at my boy Ollie that I’ve really enjoyed. I love that he’s more comedic again and it doesn’t seem forced comedy either. So bravo team, keep up the cool work and the on going beautiful art!

I’m different. My currency is pain. I don’t trust you to do the right thing unless I threaten to break your spine.

Batgirl and the Birds of Prey #1 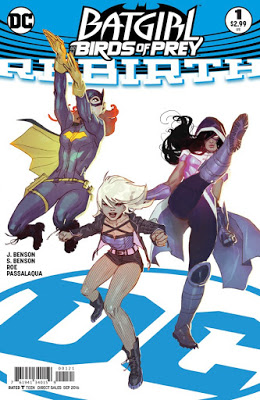 I couldn’t help myself, before this issue came out I read up on it as much as possible and sadly, because of that, I knew a lot about this issue not just some over all thing on the writing team or the artists like I had hoped when I kept on reading. Don’t get me wrong, this was a really cool issue but I just wish I didn’t know so much about what was going on for this issue and a few others.
Nevertheless, I truly enjoyed how they brought Babs and Dinah back together with a cameo of Dinah’s band days (thank you for acknowledging that guys!)  while Helena was off on her own piecing together her life and dropping the bomb that she know’s whats going on. I like the little twist that she brought into the issue and I’m excited to see how it goes for the rest of the run. I’m all for more Helena VS Dinah fight scenes with Babs coming into keep them from killing each other/breaking too many bones.

Time is on my side but time is a terrible sidekick. Which is fine, ’cause I’ve got no problem taking these guys out all by myself. I’m Batgirl after all. 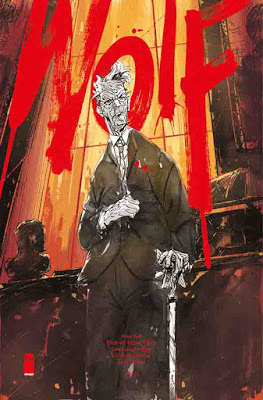 I’ve been recommending Wolf to people since I started reading it and even more since the first trade came out.
Wolf is and I think always will be one of my favorite comics to recommend to people that isn’t my token DC and Marvel comics that I tell people to read. Wolf is just on a completely different level with it’s art style, narration and over all story telling. It’s by far one of my favorite comics in my pull list, and I’m really sad to see it go.
I’m kind of in denial that it’s over and plan on buying multiple copies of both trades so I can give them to people to read and shout ”ENJOY, YOU’LL THANK ME LATER AND WISH YOU READ IT WHEN I DID!”
I’m in love with how the first half of the series and the last half was completely different in the art style and they made it work so well. It was a great way to show the five year time skip without making it weird. Any time art changes completely I’m left thinking about American Dragon Jake Long from when I was a kid and how annoyed I was when the art changed. Here, it worked so well and I applaud every member of the Wolf time, past and present. Thank you for being amazing, you’ve gained a massive fan for whatever else you all do.

Yo Mamma is a wonderful lady, and I’d never dare offend her. 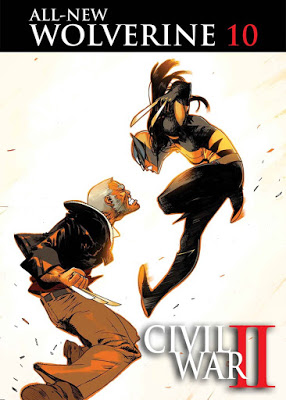 This was one of the many Civil War 2 tie in issues I’ve had to read but this one I truly enjoyed. It was a great balance of comedic and emotional. This issue gave me some Logan and Lauren drama, some adorable Gabby and Logan moments and a good cliff hanger ending that I’m excited to see take place next month! Thanks All New Wolverine team!
I have very mixed feelings on the whole Lauren VS Cap show down that will happen next month thanks to the whole HYDRA Cap BS. Nevertheless, I hope it also gets Logan to punch him just once in this series, that’d make me happy.
Gabby is still an adorable, kick ass ray of sunshine and I cross my fingers each issue that she doesn’t end up killed off. Keep up the awesome work team, I’m rooting for you each month!

Whale noises are supposed to make me less confused? 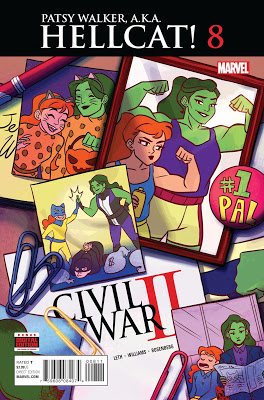 Oh look, another comic series I’ve been reading has it’s turn for it’s Civil War 2 tie in issue! Better to get it over with now I guess. This was a good tie in issue though so I’m happy I read it even though it made me all emotional with Jennifer and Patsy feels. Damn it guys, I’m already emotional enough over Jen, did you really have to gut punch me with this?
Anyways, this was a simple filler issue that was meant to tie into the bigger scheme Marvel’s got going on with Civil War 2. It was good, I’m happy I read it but I wish it didn’t have to happen. DAMN IT JEN WAKE UP ALREADY, DON’T BE IN A COMA FOR THE NEXT FEW MONTHS!
America Chavez, A.K.A. Ms. America. Team Ultimates. Portal-punching super-teen. 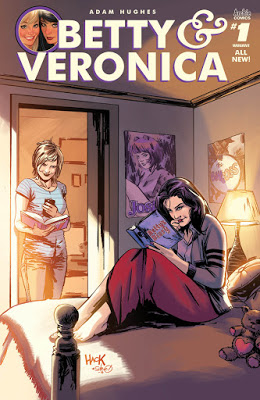 I’m so happy that Betty and Veronica have a series together again. It’s just so pretty and on point with how everyone ‘sounds’ in the other comics that I’ve read so far for Archie and Jughead.
Betty and Veronica were comics that I always saw growing up inside grocery stores but I never really read them. They were just two cute girls that were always fighting and I never understood why. Now, of course I understand and truly appreciate what’s going on between them. This comic was a great start to the series and I’m excited to see where it goes, for Pops and in general! It just added onto my excitement for the Riverdale series on the CW.
I loved Betty’s grandma and how beautiful everyone looks. Bravo to that adorable page of Betty and Veronica talking about what was going on in the comic, while reading the comic. My hats off to you Betty and Veronica creative team!

Wow. I hope you’re getting an A in drama class Betts.