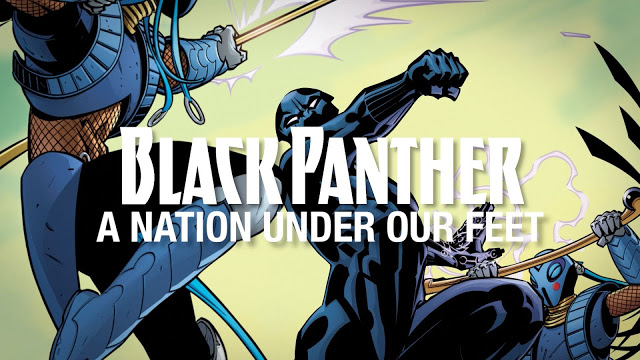 “BLACK PANTHER: A NATION UNDER OUR FEET – PART Three”
FEATURING THE WORLD DEBUT OF
“WHAT YOU CAME FOR” BY JEAN GRAE
Innovative Marvel Video Series Bridges Marvel Comics with Top Music Talent
Marvel  Comics continues to present this year’s breakout  Marvel  Super Hero – the Black Panther – through a monthly video series that continues to link the world of comics and hip-hop blending animated comics along with commentary from Black Panther writer, Ta-Nehisi Coates.  Additionally, Black Panther: A Nation Under Our Feet – Part Three is launching the brand new track, “What You Came For” by Jean Grae.
This new video series is designed to present the world of Black Panther to a whole new audience and will offer fans a monthly recap of the best-selling comic book series prior to the latest issue being made available and on sale.
Within  Marvel  Comics’ Black Panther, written by The Atlantic national correspondent and National Book Award winner, Ta-Nehisi Coates, accompanied with outstanding art by Brian Stelfreeze, Black Panther confronts a dramatic upheaval in Wakanda that will make leading the African nation tougher than ever before! When a superhuman terrorist group calling itself The People sparks a violent uprising, the land famed for its incredible technology and proud warrior traditions will be thrown into turmoil. If Wakanda is to survive, it must adapt — but can its monarch, one in a long line of Black Panthers, survive the necessary change?

“Do I want to submit a brand new song for Marvel’s Black Panther collaborative video series? Are you kidding? Probably one of the most exciting requests I’ve ever gotten . One, collaborating with Marvel on anything is a dream filled with unicorns. Two, Black friggin’ Panther! Three, Ta-Nehisi is writing it. Four, everything about where we are as a people right now. It’s so important and needed. I’m so proud of everyone involved in this. ​Now I’m crying.”

This new video series has already reached global proportion and will further emphasize how  Marvel  is the premiere name when it comes to story-telling, diverse character development, and now, musical integration.
Black Panther #3 is available digitally through the
Marvel Digital Comic Shop and at all local comic book retailers.
To find a comic shop near you, visit Comic Shop Locator or call 1-888-comicbook.
For comics anytime, anywhere check out Marvel Comic Store and Marvel Mobile
Follow & Like On Twitter, Facebook, Google +, YouTube, Pintrest, & Tumblr