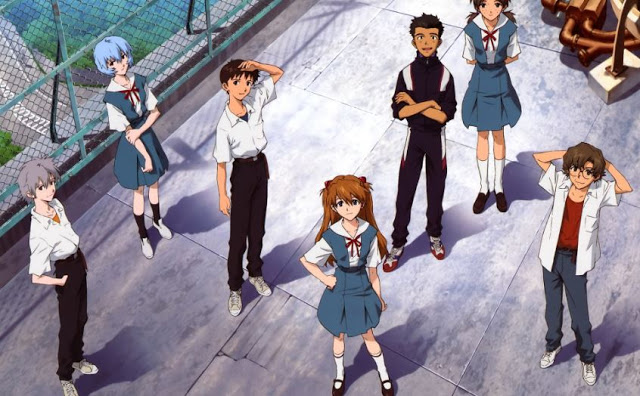 I watched the anime…Death and Rebirth…The End of Evangelion…those 3 new reboot movies-…all of it…and there’s still going to be another one. That doesn’t matter, though. Things need to be said about this series and need to be said now. I cannot wait for the movie to say these things and truth be told don’t want to. I know it’s going to be awful because every other thing I watched for it was.

Now some of you may be confused. I wasn’t hating on it the last post I made so, so what made me change my mind? Well at the time I had only seen part of the series and 1.0. I’ve spent the last 2 days marathoning the rest and just…we need to discuss this. Here is an impromptu surprise post with my rant on Evangelion. I think none of you should watch it honestly. I don’t care if it’s a classic and let’s get into why.

Let’s get the positives out of the way. The music? Amazing. The animation? Great! Art? Very pretty!

The plot and characters…especially the characters….are some of the most heartless characters I’ve ever seen in an anime EVER.

Let’s start with the most annoying thing about Evangelion. Since the dawn of time, I’ve heard everyone whine about Shinji. How whiny he is, how annoying he is, how he needs to just man up, things of this nature. I don’t care what anyone says there is nothing wrong with Shinji and he was my favorite character in Evangelion.

Yes, he is kind of pessimistic in the show and incredibly timid and maybe even a bit selfish but that’s alright. He isn’t like your typical Mecha protagonist. He’s more human and relatable as a person and in the anime he does some things that most people would have pissed themselves if they had to be in his place!

Shinji may be all his things but we can’t be so harsh on him. He’s a 14-year-old boy with an absent father and a dead mother. You don’t come back from that trauma easily! The way Shinji is would take a loooong time to fix and no one really helps the poor guy out.

On one end we have Rei who doesn’t say much and isn’t even around as much as you would think. Asuka who abuses him in every way possible and even Misato can be a bit cruel towards him! He has no one can truly turn to and rely on in the show without being called a baby or told to man up! It’s so awful and mean spirited. You say he whines so much but he has every right to whine!

He’s treated pretty badly with the exception of a few moments like when he moved in with Misato. Especially in the movies. He gets slapped and smacked around for stupid reasons! He doesn’t deserve it at all and I wish there was a character that stood up for him. Technically Kaworu could fit in this category since he was the only character that treated him the way he deserved to be treated.

Shinji does have bad traits, that’s not arguable. But he is also very caring, very gentle hearted and when it’s needed can be very brave. I’m proud of him and the fact that he still comes back to pilot the Evangelion after some of the shit he’s gone through. He was the best character and the treatment he went through by pretty much all the characters was appalling.

During the third movie, THEY finally did something right. FINALLY. The introduced Kaworu in the show. His relationship with Shinji was absolutely adorable and I’m pretty sure they may have liked each other in a romantic way. That’s not even me trying to over analyze. Shinji was all blushy around him and Kaworu said that Shinji was the only thing he ever thought about. I feel like they showed their bonding better in the movies compared to the show so I’m mentioning specifically him and Shinji in the movie for this.

Romance aside though Kaworu was so kind to him and Shinji was actually opening up to someone, something he didn’t typically do with the other characters. They were bonding and even when Shinji went back to how he was in certain moments Kaworu never yelled at him. He tried to be understanding and it was so sweet and touching to watch!

But as we know Evangelion can’t have that! They need Shinji as a punching bag for the girls! So the movie decided to blow him up right in front of Shinji blood and all! Then had the girls immediately after tell him to snap out of it, man up and not be a baby. In the anime, Shinji is the one to kill him, but I found it more brutal in the movie. Either way, though my next point still stands.

Just…what does this anime have against happiness? Why does it have to be so negative and nihilistic all the time? I know that Kaworu was an angel…somehow but you know what? Evangelion’s plot was messy and kind of confusing anyway and it had plenty of moments that made 0 sense. Are you telling me the writer couldn’t find a way to save him or bring him back? Come on! Of course, he could have, but he didn’t because he wanted Shinji to continue being a human punching bag!

I dislike this show because it’s negative for the sake of being negative and it’s passed off as classic and a legend for being super mean-spirited. It rarely has any positive moments or many characters that deserve positive moments. The show is just so…hateful. It’s annoying and pretentious.


Point 3. Doesn’t Know What It Wants To Be

Even with the bigger picture that Shinji is supposed to be saving the world the way he’s treated isn’t justifiable. In fact, it’s even less so. If he’s supposed to be saving the world he should be treated much more positively, and helped gently along much more instead of getting yelled at all the time. In fact, if they had maybe The End of Evangelion wouldn’t have happened. Technically, it’s their fault for not helping him when he truly needed it and being so cruel. If they had been nicer Shinji may have started to see the world as worth saving.

The show doesn’t seem to know what it wants to do with itself. True many stories can fit into more than one genre and do it amazingly. A coming of age adventure story can work but this somehow managed to be wrong at every turn. If the show wasn’t such a negative nelly the elements would mix amazingly but the author insists on being negative and nihilistic constantly so we don’t get a good show. Great.

I decided to give this show a 5 out of 10 on my anime list. I didn’t have the heart to call it bad because of all the work that went into it, but also couldn’t bring myself to call it fine. If you think you can put up with the characters and the negativity then awesome but as for me, this was a disappointing series and doesn’t really deserve to be called an amazing classic. Even with all, it’s cool art and music it doesn’t make up for all the hatefulness this show seems to carry.

That’s about all I have to say! Let me know what you think as well! I wonder if anyone would agree with me on this.