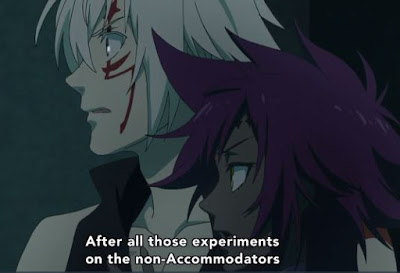 This episode as one of the saddest things I’ve seen out of D Grey Man and certainly a dark one. It shatters the illusion that the Order is always the good guy and will probably traumatize poor Allen for years to come. Let’s dive straight into the tear-jerking and upsetting episode 6 of D Grey Man Hallow.

It is revealed that this episode will be a flashback episode. Through Allen, we will see the memories of both Kanda and Alma, mostly Kanda though.

Starting where we left off Alma talks to a man named Dr. Edgar one of the scientists. Allen starts to realize that this isn’t exactly real. We are shown that Wisely is causing Road, Kanda, and Allen to have these visions and is basically toying with their minds, all with a deadpan expression. Road makes her appearance known to Allen in the fantasy world as well much to my dismay since I honestly hate when they’re together. Their dynamic is cool but I hate seeing them shipped. They wouldn’t have any chemistry!

The rest of the Noah Family just watches making the occasional remark but Wisely mostly just tells them to be quiet and ignores them focusing on the task at hand. To be more accurate he actually says “Shut up Onlookers.” A line I for some reason really like. I think I’ll start using that in my life now haha. It’s quick and straight to the point and may even sound better than cursing. I’ll be sure to test that soon, haha.

More importantly, though Wisely is trying to awaken Alma from his coma and brings Alma into his little mind spell as well. The others beg him to leave Alma alone but Wisely doesn’t seem to be listening or caring much. Wisely’s awful but…darn it I love those emotionless/deadpan anime characters. Too much to hate him!

Back in the fantasy/flashback world. Alma and Kanda are shown to not get along very well at all. They are having a huge fight again, and by huge fight I mean literally punching and kicking each other’s asses around the room. The scientists who try to stop them just wind up brutally injured in the process.

Eventually, the fight apparently simmered down. They are now sitting on opposite doctors office tables and another character appears. She is Dr. Edgar’s wife and her name is Tui. He seems to be the most easygoing one in the relationship. She’s the stern one for sure. The two thankfully have regenerative abilities and are fine after the whole fight.

The priest character that seemed so attached to Alma earlier talks to Alma. Apparently, he has had trouble controlling his emotions as of late. He lightly scolds him but doesn’t really yell. Which is good because I wanna see Alma not sad as much as possible. The poor thing is so adorable. Someone adopt him-

Alma apologizes explaining he just wanted to be Yu. Yu always the jerky one even from conception calls him creepy yelling at him and asking if he’s a stalker. Telling him to die and calling him a dickhead (Where he learned this language not even the show knows)

Alma starts crying again grabs a table and throws it at Yu. Damn it why can’t they play nice? I wish they got along better. Maybe if they had what happened may not have and this sad episode could have been so great-

Anyway, Yu starts to realize he isn’t like regular humans. He sees he was an experiment through questioning Dr. Edgar about his origins and seeing the holes other apostles will come out of. Alma wants to join them but Yu runs away making Alma cry again.

If you weren’t sad already you’re about to be because we cut right to child abuse! Some Elfen Lied level shit right here! We see Kanda being experimented on pretty much. They are trying to make him synchronize with the innocence. Despite all the pain and pretty much torture he’s going through, no one steps in to stop it. It is revealed Alma is going through the same as Kanda.

Kanda for the first time while wandering on sees the face of a woman in the smoke. He tries to go towards it but falls into one of the holes. Alma shows up as well trying to tell him to look out but it’s too late.

Alma was there by coincidence this time and wasn’t following Yu (If you believe him that is). Both their bodies are still weak after the tests and one of each of their arms fall off. It was presented it funny but honestly made me go “Awwwww poor babies.” Someone let them be happy!

Alma has also seen the spirit. Her name is apparently For. Alma calls her a sprite. They almost fight again but wind up bleeding and falling over. They both laugh showing that maybe they’ve bonded a bit.

They go back to the same room later on. Yu has a more detailed vision of For and falls over. Apparently, according to the priest, he isn’t supposed to be having these visions and neither is Alma. Apparently, these will cause him to go insane eventually as well. This was the same fate as the other test subjects.

They say they want to freeze Yu and end the experiment. I guess that’s a fancy way of saying “Kill him.” Alma was listening by the door however after beating up the doctors guarding the door. He was always close to Yuu and doesn’t want to let this happen naturally so he gets to work.

Yu isn’t in the most stable state when he’s found but Alma picks him up and runs down the hall with him trying to find a way out. I think Alma is honestly the sweetest and bravest character in the show at this point. He cares so much for Yu it hurts me.

They almost both captured but Alma kicks Yu off the ledge so he has a hope of making it to safety. Two other exorcists (or at least one exorcist) find Yu when he gets out of the water. They pull the weapon out of Yu but he passes out and is yet again caught right back into the experimenter’s clutches. I wanted to flip a table at this point in the episode if you can’t tell. It could have been nice but NO. Damn higher ups always ruining things in these shows-

Yu has a vision of For, in much more detail and has a vivid dream about being killed by a clown like Akuma. Tui says he’s going to put a spell on Yu making him “Go to sleep.” Yu who woke up at this point starts laughing and we are finally told in detail what’s going on.

Yu laughs and starts showing erratic and insane behavior. As it turns out he’s remembering his old body and its memories. All the experiments are made from the exorcists died so long ago and the innocence they were using to attack him for the experiment was his own. This…honestly explains why Yu is so angsty and angry all the time. That’s intense…poor guy.

Allen is brought to the forefront again. He watches Kanda get electrocuted starting to feel Kanda’s pain and emotions as well. Road snaps him out of it thankfully.

They are suddenly shown Alma’s memories. Alma has woke up and he escapes from wherever he is trying to find Yu and rescue him from being put to sleep again. My god this poor child. This whole scene is so emotional. They try to get him to come back but Alma calls them monsters saying that if he has innocence he can still fight and continues to make his way down. Dr. Edgar just sits there crying.

Alma makes it to the innocence. The hooded ones try to stop him by setting him on fire, but Alma despite being almost burned to a crisp keeps on going powering through all the pain for the sake of saving Yu.

Alma seems to have merged with the innocence but he sees the bodies of all the failed experiments before him. Allen does as well as the screenshot I chose to use for this post shows. Allen is told by Road in order to win the war against the Akuma’s the order took drastic and disgusting measures. They took the brain of a fallen exorcist and kept trying to put it into new bodies despite all the suffering it brought. This was the second plan. The episode ends with Allen looking completely traumatized.

Overall this was a great episode. I loved it even though it was very dark and sad. I’m really interested in what Allen will think of the Order after all of this. Even though they weren’t technically part of it he sure won’t feel comfortable working with them. This is definetely going to make him think about things and re think a bunch of things he’s always thought. It made me think for sure!

Either way that was the episode! I hope you all enjoyed this post and I bid you adieu until my next post whenever that might be!