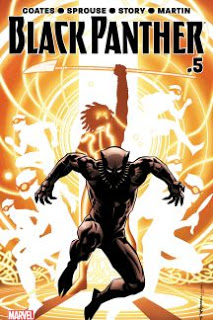 This month we’ve seen T’Challa take charge again, he’s been off fighting rebels and squashing them to save his people. He’s made pacts to fight against his enemies and we witnessed an intense council meeting with some fabulous comments made by T’Challa on all of the men in his council meeting. We also saw another take of the meeting through one of his members and some of his current enemies. It ended horribly for the man involved and it also has come to bite T’Challa in the ass. NEXT MONTH’S GOING TO BE CRAZY!

So much rage. So much hate. So much shame. I must master all of it. I must not let it master me. 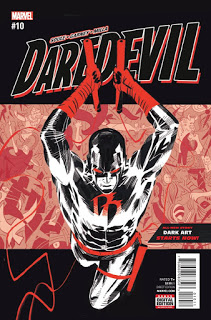 Sassy Matt Murdock owning his city is what I live for. As a native New Yorker I thoroughly enjoyed his opening monologue about how the way ‘the neighborhoods work, you might never see most of it. You’ve got where you live and where you work and maybe where you go out. Everything else might be a different country.”


Matt’s been back in New York for awhile now in the comics but he’s fucked up on a lot of trials recently so he’s no longer his own boss. He’s been back at the DA’s office very low on the totem pole with a lot of ‘frenemies’  to deal with. Matt’s tired of it and for a good reason but it’s still fun to see play out. It just gives Matt some time to build himself back up which I’m pretty sue he has with The Accused story however I don’t think it’ll come into play for Matt in his own series just yet.

Blndspot on the other hand has healed up from his busted arm from Elektra’s brief story arch and has been itching to go off and patrol. Poor guy stumbles upon a dead body at a place he’s been invited to and it doesn’t seem like it’s going to go all that well for him. Matt comes in to help him out and revels that at least 113 peoples blood has been used for the creepy mural that Blindspot’s stumbled upon with the dead artist. The plot thickens, kind of like the bloody wall mural.

Why take down one bad guy when you can take down four? 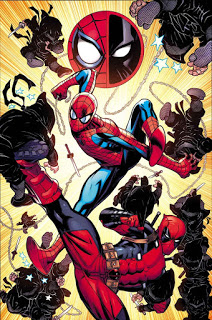 After two months of entertaining filler issues, Spider-Man/Deadpool is back to it’s main plot line. The cat’s out of the bag now and Peter know’s Wade was hired to kill ”Peter Parker” and he’s pissed. Spidey even has that angsty black and red costume that Wade finds pretty hot. It’s cheesy and border-line adorable to me.

Peter’s pretty pissy this entire issue but it leads to some golden banter between him and Wade that’s why I’ve been reading this series.

Peter and Wade fight the Patient Zero enemy with his large gang of monsters throughout the issue and the fights were really cool looking. He’s one ugly sonofabitch and at the end of the issues escapes leading into the next arch with a woman that’s mixing Peter and Wades’ DNA together inside of her. I’m all for where it’s going since it seems like it’ll be a lot of fun once again. 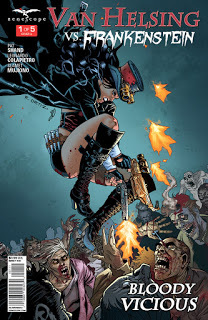 So, this is a five part story and I’m pumped. I don’t read a lot of Zenescope but I try to keep up with it. I really love Robyn Hood, I just haven’t read her new run but I’m always up to date on Van Helsing when I can be. It always hurts to be Lieseal and I always appreciate the fact it’s not an easy ride for her. I love stories where my characters have to suffer and not have an easy ride all of the time. It’s fun to see them over come challenges such as zombies and a hard core Moth Man damn it and that’s what I got. Crazy fights, witty banter, romantic feels for Lieseal and Hades and emotional feelings for Franklyn and Taylor. And some Robyn, Marian and Sam cameos!

This was a great start to this run and I’m excited for the next four issues! I can’t wait to see where it goes! Thanks again Zenescope and Van Helsing team for giving me another great read/reminding me why I pick up this comic!

We met while hunting for an incubus that was haunting the Penn Station bathrooms. We ambushed the fucking thing a the same time. Surprised me so much I almost shot them.It was a regular meet-cute.In a supremely twisted rom-com. 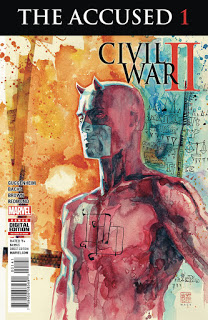 I’m so happy I got to read this comic. I really wanted to see the trial take place and was a lil peeved when I didn’t get it in Civil War 2. Now I got it and I got to see Matt Murdock be his typical badass and lovable self.  While Matt didn’t agree at first with what Clint did and while I still have a bunch of my own personal head cannons about Matt and Clint being dumpster bros, I totally respect and understand Matt’s views this issue on Clint V Bruce trial of sorts.

This art style was unique and I enjoyed it. The art was more like Daredevil’s current run so woo-hoo for consistency! Clint’s guilt was painful for me to see but I’m happy I got to see it. I also enjoyed the tiny panels of Tony, Carol and random citizens reacting to the trial taking place. It was interesting to see everyone elses views on Clint and Bruce.

I also appreciate all of the lawyer jargon used throughout the issue because I actually understood it.

Over all, I hope this The Accused story pops up again because I feel like more trials are going to be taking place soon enough.

Relax, Matt. It’s not only the most important cross examination of your life.

My Ranking for the Week