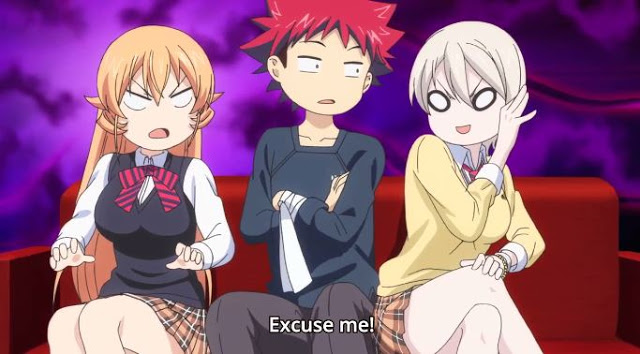 So as you can see from the screenshot this was an interesting little episode. I was honestly surprised by the result since I didn’t think it could happen.Here’s Shokugeki No Souma Ni Sara Episode 7!

The episode starts with Akira being tied up to a chair and blindfolded. (I know this is food wars but this isn’t what it looks like I swear) He accurately guesses all the spices in front of him without seeing or touching them. Turns out this is just Akira’s hardcore training regiment and he’s training and honing his skill before the next match.

Meanwhile, Ryo is doing pushups and Alice comes in saying that he is definitely ready. There is a funny part where she sprays air freshener around immediately after that. It killed all the tense atmosphere in a very funny way. She’s in a good mood even though she lost to Soma thankfully. I’m glad that Alice isn’t sad since she is my favorite female character. You can say she’s like Erina but she’s different in my opinion.

The next fight shall be Akira vs Ryo if you couldn’t tell. I thought that Akira would win. The show seemed to be hinting at him going against Soma, but more on that later.

Meanwhile, it turns out Soma has invited himself into the VIP room. It was funny how much Erina disliked it. I love seeing her get knocked down a few pegs whenever possible.

The contest is a western style dish again. The two get to work and Akira is working on a dish that involves duck. Rumors say he’s a candidate for the elite 10 and Erina seems to favor him more as well saying Ryo lacks spirit. This is where Alice also makes herself invited in the VIP room.

Alice reveals that Ryo is more than he looks. He was basically raised in a hostile environment. He was always determined to win which is what makes him so crazy whenever he wears that red bandana basically. His life depended on cooking well and all he had to rely on was his skill and competitive spirit. Ryo is also quite hardcore about the whole thing. During this whole monolog, he kills an eel brutally on stage but no one is sure what he’s making quite yet.

The two try to trash talk each other a bit but it doesn’t seem to be working. That and they both seemed to be evenly matched despite the difference talents. Akira impresses everyone with his spices and Ryo has cast iron focus making sure everything is perfect so that he can win.

The dishes get finished. Akira makes one called Canard Apicius. When the female judges eat it, they immediately are in scantily clad duck costumes while talking about how amazing it is. At this point, the fanservice honestly makes me more curious if anything. Like “How will they make an interesting fantasy out of this dish?” We also get to see Akira’s spices personified as I think…Yu Gi Oh cards? (Unsure) and Ryo getting the shit beat out of him by said cards. That was definitely funny.

We then see Ryo’s dish. It is eel matelote. They start talking about the food incessantly, and Ryo tells them to just shut up and eat. Honestly, that is how I feel whenever they do this show. It saves screentime and the animation budget damn it stop rambling!

The eel itself impresses the judges a lot. Mixed with the mashed potatoes he also made it impresses them even more. As it turns out there really is more to Ryo and his skill then most people think. The judges are asked to choose which one they liked more.

Some were able to decide but the vote became split making the match a tie much to everyone’s shock. Soma realizes that both Alice and Erina are gone at this point and Ryo is needless to say furious.

They all discuss for this a bit and then decide on a way to settle things. They let them both progress and have the first ever 3-way match in the fall elections! The leader of the school agrees to this proposal and decides that Soma will be the one to compete with them!

Ryo is angered because he wasn’t the one to win and scares away one of the students congratulating him. This was pretty funny as well. Especially when Alice had to blow a whistle and tell him to basically knock it off like he was an animal of some kind.

Akira handles the whole situation much more gracefully. He seems a bit disappointed with the draw but cares more about the next match then the results of this one.

The students in the newspaper club want Soma to comment as well but he has no idea what to say but says he’s happy for the chance to continue forward like this. This ends the semi-finals!

The theme for the finals will be pacific saury. Every year is a new theme and this one is for this year. I’m curious to see what they’ll do with this! The fish has something all 3 of them can work well with. The match will be held in 10 days and it ends with the three standing epically near each other.

They all are trying to prepare, Ryo wanting to get right back to battling with Alice as practice. Meanwhile, Akira seems upset because all they seem to think he’s good for is spices. Only Soma seems to have his bearings on straight at this point.

This was really cool! I had no idea they would ever choose to do a tie, then again the opening had footage of Soma fighting those 2 if I remember correctly, so maybe I shouldn’t be that surprised. I look forward to the next episode!

I’m going to post a personal update up on WordPress soon about life and stuff. There are some things I want to say about life and of course, D Grey Man will be up on Wednesday! I bid you all adieu until then!

One Thought to “Shokugeki no Souma Ni no Sara Episode 7- Tie!?”