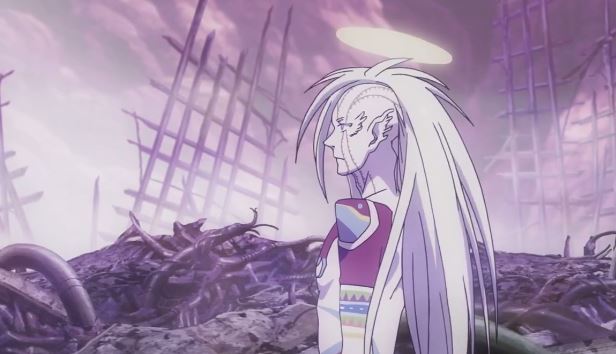 Soooo as it turns out we aren’t done with the rest of this flashback! Not that I’m complaining. The last episode was amazing, this one was going to be as well! Without delay let’s get into D Grey Man Hallow Episode 7!

We get a brief recap of what happened in the last episode. I assume they do this to make sure the trauma and sadness sunk in properly from last time.

We cut to the blind exorcist from before. He was injured in a fight and the scientists looking for damage. They say this new Exorcist, Noise Marie will become an exorcist in the 2nd Exorcist plan.

Meanwhile, after seeing all the failed experiments Alma seems to be losing his mind. Again I must say poor Alma! He takes the memories of his previous life much worse than Yu does. Yu uses them as inspiration to fight back and live despite everyone being against it. Through determination, he actually summons his innocence, which we know today as mugen basically.

Yu comes out with the sword covered in blood. I’m not sure if it’s his own or not. I’m leaning towards his own since we already know it was Alma who killed the staff. The scientists, most of them anyway are hiding in one room and Alma walks in. Another scientist is looking for her as well but can’t get inside.

Meanwhile, Yu finds Noise attached to hospital equipment. He wakes him up so he won’t become part of the Second Exorcist plan and Yu takes Noise with him on his escape. For’s husband is looking for Alma and goes into the room where all the experiments are kept. He finds him but his eyes widened. We aren’t sure why because we cut back to Yu again. This is a really good way to build suspense and I loved it!

Yu has to carry Noise on his back since his injuries keep from moving. It turns out Noise knew about the Second Exorcist plan and is actually livid, but handling it well partially thanks to Yu’s company. This makes Yu remember Alma,  and decide he wants to leave with him. We actually see Yu show more emotion for the first time in this scene. It’s very very touching.

Yu finds Alma in the next room. He is at first thrilled but then realizes that Alma killed everyone. The workers, and the other still sleeping experiments. Alma says he’s happy to see him but has to kill him as well. This scene was so upsetting, the fact that Alma feels he has to at this point is probably one of the saddest things I’ve ever seen.

Yu does his best to dodge with Noise on his back but in the end gets an arm chopped off. Alma’s insanity really starts to show here as he rambles about how the experiments would never wake up, and the fact that they wouldn’t want to anyway. He calls himself annoying and such and when we see his face again he’s in tears.

Alma actually is trying to destroy himself but can’t stop all the anger and sadness he has. His innocence acts on its own and attacks Noise. Yu remembers what Noise says earlier and holds Alma in one last embrace, allowing his innocence to harm him. After Alma becomes an Akuma (we can tell by the red eyes he became one)  Yu ends his life.

This was really sad. I really just want them both to be happy is that too much to ask?

Another girl we haven’t seen carries the scientist’s body away. Her name is actually For. They told For not to protect them and only one girl escaped so she could “Tell the next generation of the mistake this plan was”. For was their guardian spirit but was told not to protect them. She puts the husband sitting next to the wife and calls them idiots as she walks off. It’s a very solemn scene I don’t do justice to honestly.

Allen can’t stand watching Yu suffer anymore and manages to break the control Wisely had on him. He wakes everyone else up in the process by punching the eye in the forehead which actually causes Wisely physical pain.

Though it turns out it was too late and Alma already awakens. The wires in the room begin to constrict almost everyone in it. The Earl says that the order will be destroyed once and for all by the monster they created. Alma starts giving the Akuma virus to anyone too close and causes Headquarters to explode.

Link and the other half-Akuma girl are going to get close to check things out. Before they can something happens with her, though. I think she had another vision and is actually going insane. They make their way to headquarters.

The last scene is the most amazing. We see Alma awakened and get to hear his voice and mannerisms as an adult which is nice. The Noah’s, being the type who like to watch the world burn watch as Alma hatches and starts walking around. I noticed here that Wisely is super short and tiny since he can be carried so easily haha.

Alma killed quite a few people with the virus and Yu walks up to him recovering from it pretty easily with his ability. Alma stares at him and recgonizes him as Yu almost immediately. I am so sad for these characters! I really hope they can find a way to bring Alma back from this. Maybe if they can he can become an exorcist as well! I would love a plot like that, it would me so happy to see. Someone draw them happy damn it! Them as adults and happy again please-

The episode ends on a cliff hanger here though (SCREAMING)

I hope you all enjoyed as much as I did! I’m excited for the next episode for sure and shall see you all on Monday for Food wars. I bid you all adieu until the and hope you all have a great rest of the week!