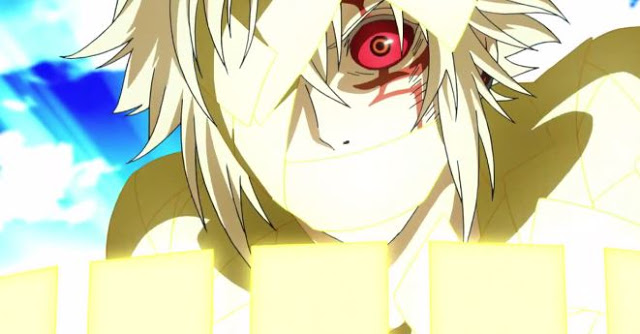 Well, it’s Wednesday so you all know what that means. More D-Grey Man. I had hope things would get better but things are actually getting worse for everyone! So today I have actually brought you all a little gift as well as an article! Here you go! :hands everyone coupons for therapy appointments: there’s enough for everyone! Don’t take more than one, though, we need to save some for Allen, Kanda and everyone who had to be a part of this.

Into the episode we go!

The 14th calmly tells Allen he’ll become a puppet and will destroy everything, like the Millenium Earl. The 14th doesn’t really talk much it seems, maybe he’s one of those quiet sociopath types. Timcampy much like his owner is also being strange and does this weird spell/incantation and shoots out pink lightning.

The pink lightning breaks the barrier that was being used to keep everyone confined. Allen seems to wake up from being possessed but it’s different from the other times. It’s kind of subtle, but his personality has changed because of everything, albeit slightly. His left eye activates and it’s revealed Alma also has the soul of Kanda’s love from so long ago in him as well. This angers Alma and he grabs Kanda by the neck preparing to self-destruct and kill Kanda along with himself.

As it turns out Alma and that woman are pretty much one in the same now. Yu finally displays some emotion and they both get caught in the explosion. This scene itself was very emotional and touching. It’s about time Yu finally opened up! I really love these two.

Meanwhile, the 3rd Exorcists are still attacking everyone in the Akira esque bodies. It’s pretty much up to Allen now to stop everything it seems but the 14th keeps trying to take over, but Allen even now at episode 9 is still fighting back hard, and going strong. I think this is the longest a character in an anime has ever lasted in one of these corruption plots.

Kanda is cracked like a doll when the smoke clears and Allen start crying. Alma, as it turns out, became an Akuma to bury his true identity and essentially give Kanda the soul of his loved one back. At least that’s what I’m getting from this. Allen pities Kanda as well yelling about how Kanda basically deserved better, and how he’s supposed to deal with this.

Alma is way more badly damaged than Kanda and even after everything starts crawling towards Yu’s body saying he doesn’t want to lose him no matter what. Allen picks him up, pretty much cradling him in his arms and brings him over to Kanda’s body. This scene shattered my heart into a thousand pieces. It was so emotional and well done.

But nice things only last a minute or so in D Grey Man and Alma’s body starts going through weird changes as well. All the other 3rds are mutating into monsters thanks to Allen’s cells and all of his friends are doing their best to fight. We get to witness a bunch of creepy changes from them and some nice fight scenes!

The dark matter wasn’t completely gone from Alma and it starts trying to eat Alma’s soul. Allen starts trying to fight back and help Alma but Kanda stops him and a different plan comes to pass. Allen grabs onto the earl using some weird cloth/thread thing and flies up to Alma. Yu calls to him snapping Allen out of it.

Allen and Yu have a brief bonding moment and Allen drops him down to Alma. It’s repeated again that if anyone can save Alma, Yu has the best chance of doing it. Allen agrees with this and gives Kanda positive encouragement. This is pretty profound for these two I would say. The two always butt heads so it’s good to see they understand each other better now and can become better teammates, maybe even friends after this.

Yu hugs Alma when he lands on him and in that moment I heard all the yaoi fangirls screaming. I can see why the whole fandom pretty much unanimously ships this. To be honest, though, I have to admit this whole scene made me cry. I don’t typically cry at fictional things but this got me right in the heart. Especially when we get a flashback to them as kids with Alma asking “You heard us calling?” and Yu saying “Of course I did dummy.” Just…ow…right in the heart…

Meanwhile, Allen uses a move called arc gate. Alma and Yu fall from the sky and Allen puts them in some other place and breaks the gate. That way no one will interfere with them and their happiness ever again.

This next scene was just a slow death to my heart, like even worse than before. Alma starts talking about how Allen is a Noah and that he and the earl are…something. Kanda doesn’t let him finish, though. Alma begs Yu not to use his innocence on him and just to stay with him until he dies. Yu obliges. Alma can’t forgive the order or himself.

Yu hugs Alma close until the moment he dies. Yu looks up and sees his love from then taking a child Alma away. The last words he hears are “I love you” and even Kanda sobs as they disappear. Makes me feel better about the fact that I burst into tears for this whole scene the first time I saw it…hahaha….hahaha….wahhhhh-.

He closes his eyes and holds Alma close still for the last part.

Back to the fight, though the 3rds are getting defeated and the regular exorcists are horrified and sad that they have to kill their comrades. The Noah’s mock their pain and one of the 3rds tell Lenalee that he became the 14th. He also tells her her only choices, trusting the 14th or destroying Allen like they did the other 3rds and that Allen will kill them all for sure. Lenalee looks very very distressed almost like she’s having an anxiety attack. Another exorcist is having a similar reaction, breathing heavy, crying.

I wonder if he heard the same thing I’m not sure.

The spirit stone breaks but the 3rds are still under that spell. Allen’s eye is red and he is ignoring everyone else in his rage. Neville tells him that what he’s doing is an act of treason but Allen continues anyway. Neville, or Hitler stash as we call him tells the 3rd that’s been corrupted to follow Alma and Yu. Allen doesn’t intend on listening but before Allen can do anything he is captured by link and bound.

Link no longer trusts him and has betrayed Allen for the sake of the higher authority, basically taking Neville’s side.

….Time to dislike Link as well now. Everyone who’s mean to Allen kinda has to die in my book hahaha 🙂

This episode was great. I had a lot to write and as a result wasn’t able to publish it exactly on time and I apologize for that! I hope you guys don’t mind and enjoyed it regardless. I’m very excited for the next episode! It’s gonna be awesome and dramatic I can feel it!

I bid you adieu until then, though, guys~.