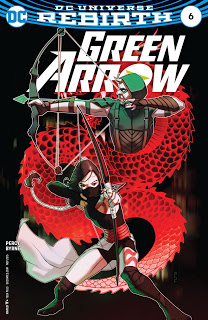 So, like last weeks Mr. Robot that gave us mainly Darlene’s point of view, this months Green Arrow was strictly Emiko Queen’s POV. Which was fine by me, I like Emiko, she’s like Thea but the love child of Shado and Oliver’s dad. I love that she’s off trying to do her own missions without Oliver, I just sort of wish she said something because now I’m ”worried” about her fight with Clock King that’s going to happen next month, or sometime during this new story-arch.

I STILL ALSO NEED TO GET MY ANSWERS FROM LAST MONTHS ISSUE, but I’m fine with this too. It was still dramatic, it just didn’t give me the answers about Dinah and Diggle that I wanted.

Aside from the unfashionable pillowcases, you guys look like you just stepped out of a J. Crew catalogue. Shouldn’t you be ordering caramel soy lattes instead of robbing banks? 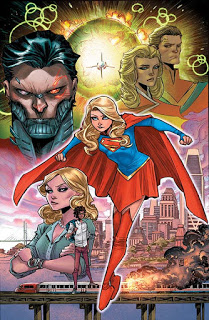 I forgot, Kara’s in high school, she’s got to go through an angst-y high school stage now for a bit. It’s not a bad thing, I just sort of forgot she’s all out of place because Kyrpton was so much more advanced than Earth currently is. I enjoyed seeing the flash backs of her on Kyrpton and her on Earth, the parallels were great, I just ”feel” bad for what she’s going through.

I love Kara’s step-parents, they are adorable and also love that Kara has to learn how to drive like every other high school junior. It’s just fantastic with how hard her parents are trying, it makes me really happy. I’m excited for next months issue due to where this one ended and am curious about how things will play out with Kara’s school and Cat Grant’s foundation!

If it makes you feel more at home, you can discombobulate with us in Kryptonian anytime you feel nauseous. Honest. 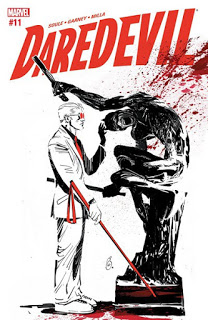 I relate to Matt thinking his boss is going to fire him when they have to talk waaay more than I probably should.

Anyways, last month Blindspot stumbled upon a horrific crime scene, a huge mural made in blood. Now, Matt’s been busy, Blindspot’s been busy, and the man who owns the building that the mural wants to let it be an exhibit. However, Andrea Pearson, NY’s councilwoman isn’t here for that shit because her niece is one of the victims. Of course the guy’s stubborn and still wants to try so Matt & Sam/Blindspot, (who still doesn’t know Matt is Daredevil), go off to the exhibit.

I enjoyed the pacing of this issue and I’m IN LOVE with that cover. Like we’re married, it doesn’t know it yet, but we are. Everyone’s invited to the wedding, color scheme is black and red.

The end of the issue reveals our ”Vincent Van Gore” and man, that might just give me nightmares.

Yes, Matt. You may not have noticed, being blind and all, but the bulletin and every other rag in town has been going nuts with the headlines. They’re calling this guy Vincent Van Gore. 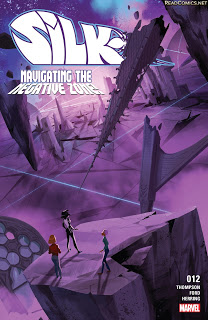 Surprise! I totally forgot to read issue 11 of Silk but that lovely Previous page caught me right back up.

THIS ISSUE WAS FILLED WITH SO MANY NERD REFERENCES I’M HAPPY I DIDN’T READ  THIS INSIDE MY LOCAL COFFEE SHOP LIKE I PLANNED ON DOING BECAUSE I WOULD’VE BEEN LAUGHING LOUDLY IN PUBLIC AGAIN.

This was a well needed issue of Cindy being off with her friends trying to find her parents in the Negative Space. It was a fun issue, the writers clearly had a lot of fun seeing how many references they could throw into this issue and I’m happy they did!

If we survive this, let’s get a cat!

If we survive this, let’s get married. 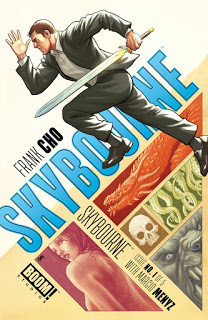 First things first, this cover is AWESOME.
Second thing, I appreciate that it tells me it’s only five issues. I hope it means the story and not the series.
Third thing, and yes, I did this on purpose, three bad-ass children? Hell yeah!

This comic was AWESOME from start to finish. I really do hope it’s more than five issues. It was so much fun and bloody all at once. THANKS BOOM COMICS! And thanks Kat for telling me to read it!

Go buy this comic now, it’s fast, bizarre and super colorful! I can’t wait to read it for the next four months! READ IT WITH ME!

Now hand over the sword and I promise you’ll only have a limp for the rest of your miserable life.

My ranking for the week;