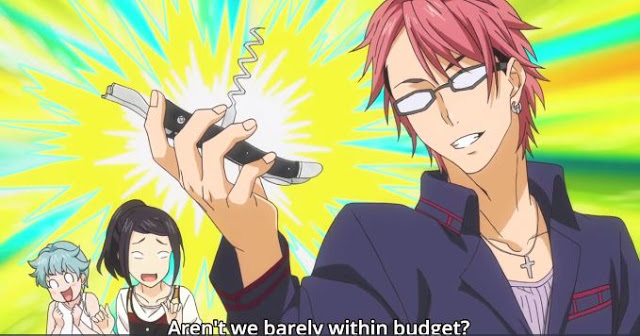 So here we are at episode 12! One episode away from the season ender. I say season ender and not season ender because I’m 90% sure there will be another one. This show is quite popular, and I’m almost sure this season will end on an incomplete note. Let’s get into it, shall we?

We start the episode a little differently this time. We start with Shinomiya a chef that now runs a French Restaurant and passed the academy with flying colors. He is upset that students are being sent to his restaurant for the stagiaire but has no choice to accept. He, however, won’t accept anyone else but the election finalists. He gets exactly what he asks for, opens his door and sees a cocky Souma standing there, ready for his next challenge. He seems ready to wipe the floor with Souma though.

To be honest, I really like Shinomiya get it. If you’re one of the people who has followed this for awhile, then you’ll probably get it when I say he reminds me of THAT teacher. You know what teacher I’m talking about, the one that would just not give you that A no matter how hard you tried. The one that would deduct points for even the tiniest error. He still lives up that role even now.

Soma barely has the chance to talk much, but knows that it won’t be an easy task to pass in Shinomiya’s restaurant but regardless is up to the task and accepts the challenge. Instead of starting him with cooking like he should, he makes Soma start of construction and interior work on the restaurant. Makes no sense since he’s the cook but you know, he is THAT teacher after all.

Soma mops while Shinomiya threatens them with being fired. We are then introduced to the two other people working with Shinomiya. Gao Wei and Luci Hugo. They both mention that they have to come up with a menu and should hire contractors, but Shinomiya refuses, saying they should do what they can on their own for the sake of the budget. Gui brings up he can have any budget he wants since he won the Pluspol award. He says that no one will give him money for this restaurant and is basically to proud. So proud the whole staff has to work on unnecessary things for his sake! Gotta love Shinomiya huh? Ahaha…ugh.

These two girls will only be here until everything is secure at the new restaurant and Soma seems happy to meet them. Chef Shinomiya’s right-hand man Abel is also here and seems somewhat friendly. Shinomiya scolds them all saying they need to get to work so they continue. Abel seems jealous that Soma is acting so familiar with Shinomiya though since he had to work like a dog to gain the position he’s in. It bugs him to the point of tears and the girls comfort him. It’s a pretty funny scene but I feel sorry for poor Abel.

The girls talk about how Shinomiya seems to be nicer after his trip to Japan but Shinomiya menacingly opens the door and tells them to work putting everyone back in the line in less than two seconds. Shinomiya wonders what Soma meant by saying he was lucky to train here and Soma wonders why Shinomiya is opening a new restaurant in Japan. Shinomiya says he’s lucky because he needs to come up with a specialty dish and that he wants to move forward and get better. Not that he wants it to be easy.

During the break, Shinomiya cooks for everyone so they don’t have to go out to lunch. A nice gesture on his part but one I feel has an ulterior motive to it either way. He makes something called a quiche. Everyone has it and loves it but Shinomiya tastes it and says he has a long way to go, begging the question of how big the food gasam would have been had he been at his best. He opens up the wine (even though he claimed the budget was small, freaking liar). He will only accept high-quality wine of course.

Shinomiya explains that this week Soma will get closer to his specialty dish. As long as he can keep up with the work given to him. We then cut to pre-opening day.

Soma is wearing the high-class white chef uniform which “suits him better than everyone thought” insulting remark but okay. I’m used to Soma being treated like a low life anyway, to be honest. The first customer comes in and the kitchen immediately becomes full of tension. Yet at the same time, everyone works in an eerily and quiet way instead of the chaos one would expect. Soma puts down supplies a bit loudly and Shinomiya threatens to kick him out for it. That’s how quiet he is.

The reason it is this way at Shinomiya’s restaurant is so he won’t miss even a single change in sound. I think personally it’s so he can be a hardass and fire people more easily but I digress. Soma does  his best but does struggle and Abel calls him arrogant for acting like he’s one of them even when the girls seem to think he’s being too cruel and hard on Soma. Soma apologizes and picks up the pace determined to become a core member by the end of the week.

Everyone else seems to be doing well in their own challenges, Soma’s friends anyway. Some of them seem distressed but it seems that they are passing! A few other students, however, are buckling under the pressure and starting to drop like flies as opposed to Soma and his friends.

Shinomiya tells him at the end of the day that the workload will increase and that he will get left back and fail if he doesn’t change. Shinomiya refuses to give him advice or “hold his hand” so he isn’t even really much of a good teacher either. Chefs will help the newbies learn the way of things and be less hard on the newbies in real restaurants! Why can’t he!?

Soma can’t seem to sleep and remembers what he was told by Shinomiya and the staff and the autumn elections in particular. It turns out he took the loss pretty hard so instead of sleeping he works through the night like he did for the Autumn elections. When everyone comes in the next day the cleaning and peeling are already done and everyone seems shocked and impressed with Soma’s work and how it seems that Soma didn’t even sleep!

Soma even though he seems to ask a lot of questions is doing well and working his way into the core group like he wanted. The others are treating him better and like one of the group as opposed to an outsider. We then see that Shinomiya believed in him passing all along even though he was being hard on Soma. No one objects to having him around but it Soma still wants to make a mark.

Since Soma is allowed to stay for one more time Soma wants to submit something for the menu contest happening on the last day. Shinomiya accepts the offer and Soma says to himself that he will shock Shinomiya with his specialty dish! The one they’ve been building up to these last few episodes.

That’s where we are left on for the end of the episode. I liked this episode and I have very complicated feelings on Shinomiya. He still reminds me of teachers I really hated back in middle school honestly but he’s a pretty well-rounded character all things considered and not a complete jerk. I’m also excited to see the contest results and honestly want to see if Soma can make a dish good enough that will make even Shinomiya foodgasm haha.

That’s it for now, though! Next week I will not only be posting up these ep analysis posts but I will be announcing my Fall anime lineup and a new format that I will be using for these posts that I think you guys will prefer. A new way of writing these posts basically. I’ll explain in more detail next week most likely on the 30th! Maybe a bit sooner than that.

I bid you adieu until Wednesday though!