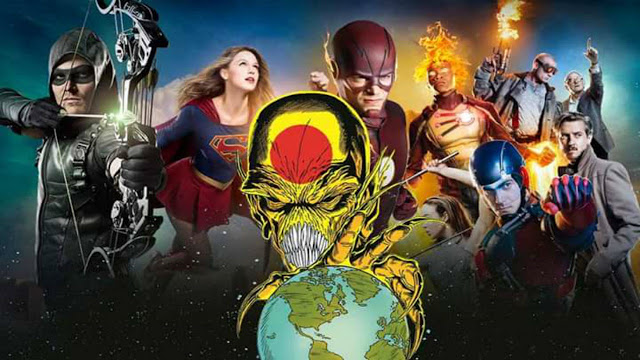 Ever since it was announced that not only would Supergirl be joining the DCTV line up on The CW, but also uniting the shows in an unprecedented four-part crossover, we have wondered what threat could unite them all? Now we know as Warner Bros. has revealed today that the Arrowverse will be facing an Invasion!

“This year, for our mega ‘Arrowverse’ crossover, we’re taking inspiration from a DC crossover from the late 1980s known as ‘Invasion!,’ which featured an alien race called the Dominators, who’d previously vexed the Legion of Super-Heroes. We’re using cutting-edge prosthetics and computer effects to achieve a feature film-quality look which is faithful to Invasion! artist Todd McFarlane’s interpretation of the characters.” 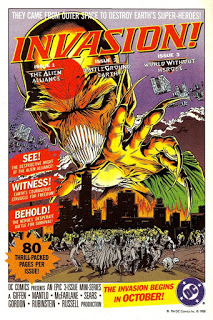 The aliens invading will be none other than the gene-manipulating aliens known as the Dominators. The Dominators were first introduced in in Adventure Comics #361 in 1967 and were originally nemesis of the 30th-century Legion of Super-Heroes. In late 1988-early 1989 DC launched a three issue limited series and crossover event Invasion that saw an alien coalition formed by the Dominators to invade Earth and eliminate the metahuman threat it poses. But unknown to the rest of the alliance the Dominators had a secret agenda to harvest the metagene and create their own army of metas.

The Dominators were defeated of course, but not before detonating a Gene-Bomb that was designed to kill the metahumans. That plan didn’t go as planned either as the G-Bomb had the unforeseen effect of creating more metahumans. The Dominators have most recently been mentioned in the pages of Green Lanterns as one of the alien races wanting the Phantom Lantern Ring.

For more on the Dominators check out Comic Frontline for an upcoming 101 video on them.

It makes sense making the threat an alien one with the event kicking off on Supergirl before making its way to The Flash, Arrow and concluding in DC’s Legends of Tomorrow. Supergirl works with the Department of Extranormal Operations (D.E.O.) a secret government agency that protects Earth from alien threats. The G-Bomb could also present some long lasting effects on the Arrowverse setting up even more metahumans on a larger scale than the particle accelerator. The Dominators could also bring in the Legion of Super-Heroes who were teased in both Supergirl and The Flash last season.

You can tune into Frontline LIVE 125 on Tuesday night 9:30 PM (ish) and hear the Frontline Crew‘s opinions on this news and more!

Let us know in the comments what you think of this DC Entertainment & The CW Network News and don’t forget to follow us on Twitter for the latest Previews, Reviews, News and Interviews!