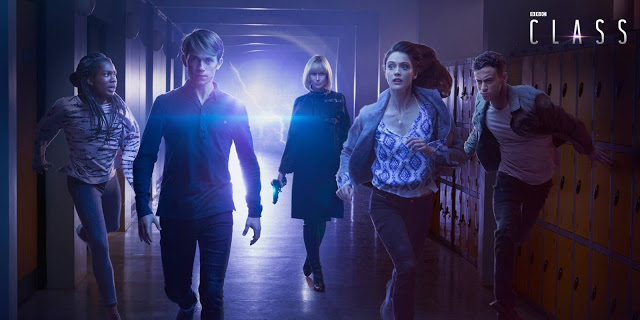 Today At New York Comic Con (NYCC) we got our first look at the upcoming British science fiction drama series, and a spin-off of Doctor Who, Class. Class is created and written by Patrick Ness, who also produces alongside Doctor Who showrunner, and lead writer Steven Moffat, and Brian Minchin, who acted as producer on Doctor Who and two of its previous spin-offs, Torchwood and The Sarah Jane Adventures.

The series is set in Coal Hill Academy, the fictional school that has been regularly featured in Doctor Who since its original 1963 serial, and will focus on six of its students and staff members, including Mr. Armitage (Nigel Betts), a minor recurring character from the eighth series of Doctor Who.

“What will you do when the shadows come? When you can’t turn away from the darkness ahead? For Time has looked at your faces, and Time never forgets.”

The six former students of Coal Hill Academy all have their own secrets and desires. They have to deal with the stresses of everyday life, including friends, parents, school work, sex, and sorrow, but also the horrors that come from time travel. The Doctor and his time-travelling have made the walls of space and time stretch thin, and monsters beyond imagination are planning to break through and wreak havoc upon the Earth.

Let us know in the comments what you think of this BBC America Announcement and don’t forget to follow  us on Twitter for the latest Previews, Reviews, News and Interviews!

All images are courtesy of BBC America