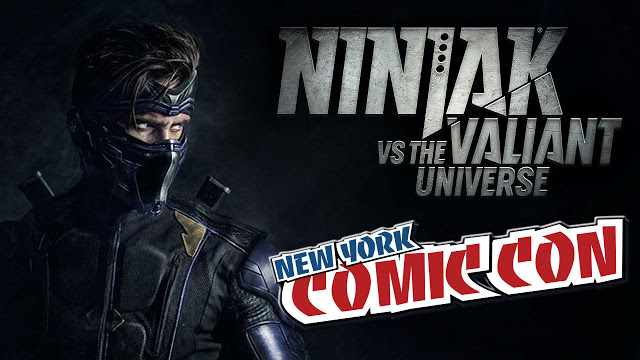 Valiant Entertainment and Bat In The Sun Productions has dropped the first trailer to the Ninjak Vs. the Valiant Universe web series.

Colin King is Ninjak, MI-6’s deadliest intelligence operative and weapons expert. When the ruthless assassin Roku exploits his greatest weakness, Ninjak will be forced to betray his closest allies. Now, on the run, he must face off against the most powerful heroes known to man for a high-octane, take-no-prisoners trial by fire more perilous and more unpredictable than any he’s faced before. In 2017, the world’s most dangerous super-spy goes to war with the Valiant Universe …

The six-episode web series Ninjak Vs. The Valiant Universe arrives in 2017 is directed by Aaron and Sean Schoenke of Bat in the Sun Productions, which produces the popular Super Power Beat Down, and written by Aaron Schoenke, Sean Schoenke and Joe Harris. The web series stars Michael Rowe (Arrow, The Flash) as Ninjak, Jason David Frank (Power Rangers) as Bloodshot, John Morrison (WWE, El Rey’s “Lucha Underground”) as The Eternal Warrior, Chantelle Barry (90210, Entourage) as Roku, Kevin Porter (Dodgeball) as Armstrong, Ciera Foster (Two and a Half Men) as Livewire and Derek Theler (ABC’s Baby Daddy) as X-O Manowar. Additional roles are expected to be revealed soon.