This 120-page graphic novel takes place in a version of New York City where magic is accepted as a fact of life. Readers follow the life of Logan McBride, a Prophecy Kid. Unfortunately, the fate of a Prophecy Kid is often the same as a child star, especially where Logan is concerned. You can check out the first chapter for free here.

Writer Pat Shand has had several long runs on Zenescope projects and some of his upcoming projects include the novels Iron Man: Mutually Assured Destruction and Avengers: The Serpent Society, both out in late 2016. Artist Manuel Preitano studied art in Rome and has worked for Zenescope Entertainment, Graphic India, Dabel Brothers, and for some regional Italian publishers. Letterer Jim Campbell has worked for Black Mask, Boom! Studios, and Zenescope Entertainment.

I interviewed Pat Shand and Manuel Preitano about the book:

Me: How would you describe Logan McBride and the other supporting characters in the book?

Pat Shand: Logan is in her mid-twenties, and she is bursting with directionless creative energy that she is desperate to find an outlet for. Because she completed her prophecy at an incredibly young age, she has been told all of her life that she has already done the greatest thing she’ll ever do… and now she’s faced with the idea of living life after that. Logan is prone to living life in big, sweeping gestures, burning any/all bridges in attempts to fix what she perceives is wrong with her life.

Lilith, who is Logan’s romantic interest – well, one of her romantic interests – is a mysterious chain-smoking woman who comes into the story when she sees Logan being cat-called on the street. She is profane and wears her heart on her sleeve, though her origin is a secret. She has a lot of issues, though, some of them dangerous. 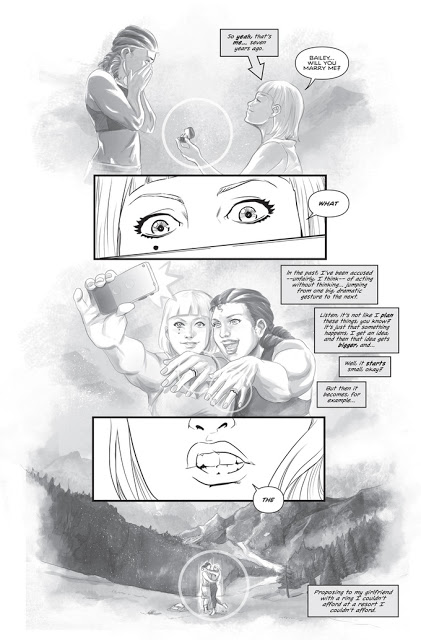 Gia is still matriculating at Destiny University, and the fact that her prophecy is so huge (she will “fell the most ancient evil on this plane”) makes her incredibly popular. She is friends with Logan, with whom she has a casual sexual relationship from time-to-time, but that friendship turns sour when Gia learns of Lilith’s connection to her prophecy.

Our supporting cast is made up of a seer from Brooklyn named Anthony, Logan’s ex-fiancée Bailey, a barista with marital problems named Augusten, and even more unique characters that make up the world of Destiny, NY.

Me: You compare Prophecy Kids to child stars and how they burn out. Was this an intentional parallel you wanted to make and explore in the book? What about this interests you?

Shand: Absolutely. I kept thinking about how so much fantasy revolves around prophecies, but the stories always end when the central prophecy is complete. And so often the kids who are part of this world-changing prophecy are just that – kids. I started to wonder what it feels like to be told that you’ve already peeked, essentially, before you even hit your twenties. What that could do to someone. I mean, after being famous as the Chosen One, can someone like Harry Potter become an accountant? The parallel to the child stars of our world was pretty clear to me from the start. 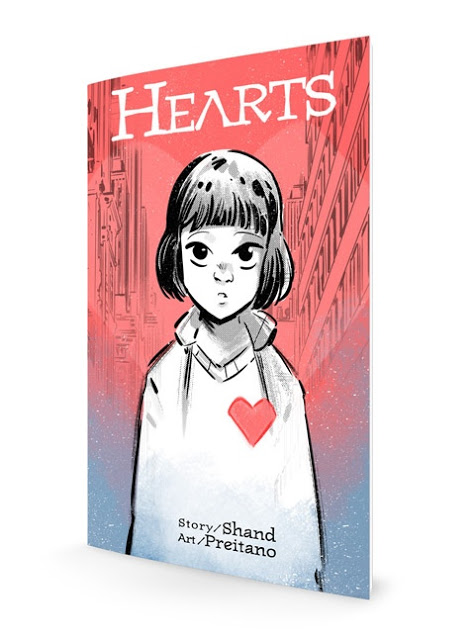 Me: Why did you decide to put this project on Kickstarter?

Shand: Honestly, I pitched Destiny, NY a little, and there was good feedback, but no bites. The biggest reason that I wanted it to happen was that I was in the middle of a lot of work-for-hire when I conceived of Destiny, NY. I wanted to work with an artist on something that was ours, something that no one could tell us to cut parts that we loved. Because Destiny, NY is a 120-page graphic novel, which is a REALLY big project if you’re self-publishing, we need help making that happen. Kickstarter has been great for the comics community and we have seen friends and peers succeed using it, so we figured we would give it a try.

Me: What is the number one reason you think people should back Destiny, NY?

Shand: I think it shows when a writer and an artist are passionate about a book, and that passion can often transfer to readers. I think there is something to be said about a comic that uses magical elements but focuses on the relationships above all else. Destiny, NY is much more Blue is the Warmest Color or Strangers in Paradise than a traditional fantasy book. I also think there is a audience out there waiting for characters like Logan, Lilith, Gia, and Bailey.

Also, the entire first chapter is available to read for free here before backing: 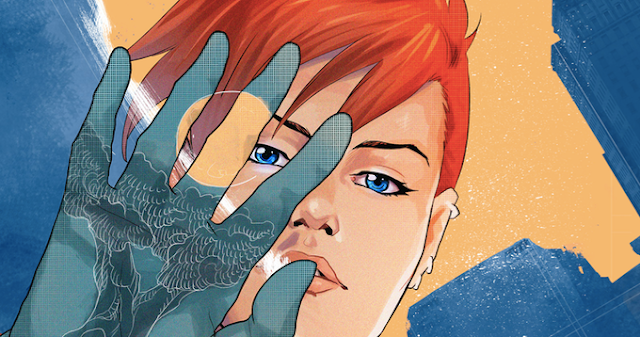 Me: One of the rewards for this project is HEARTS SPECIAL, which includes a copy of the previously digital-only short comic Hearts. What is this short comic about and why did you choose to include it as a reward?

Shand: Manuel and I contributed Hearts, a four-page comic, to Our Hearts Still Beat, Margins Publishing’s zine to benefit the Orlando queer community. I also did a short Vampire Emmy story for the second issue of that. Hearts was just something we felt was in the vein of Destiny, NY. It is set in NY, it focuses on queer identity, and it is drawn by Manuel. It has never been printed before, so we figured it would be an interesting tie-in to the Kickstarter.

Shand: Create as much as you can, right now. Don’t wait for publishers. Instead, show them that you are ready by producing work.

Me: What was your favorite part of Destiny, NY to illustrate and why?

Manuel Preitano: The final sequence of the first chapter. No spoilers here but you really feel something big is happening and Pat’s script was very effective in this regard! I felt like watching, and drawing, the first episode of a cool TV series!

Me: What is the number one reason you think people should back Destiny, NY?

Preitano: It’s something different, and it’s very grounded in modern society for its themes. Go check the series’ first chapter – available for free on our Kickstarter page – to see if I’m right!

Me: You’ve worked with Pat Shand before. How did you two meet and what is your collaboration like?

Preitano: We met working on Wonderland where he was my editor, but we soon jumped on working as writer-artist for the Robyn Hood ongoing series. Being in direct contact with him means I can storm him with questions on each issue and he can improve his karma by not getting mad at all my questions. That’s a win-win situation, then! My questions mostly regard the mood he wants get from a scene, so that I could do layouts with that in mind.

Me: Your Kickstarter bio mentioned you studied in Rome. What would you consider some of the most important things you learned there?

Preitano: I learned that the city has some of the best food in the world. Seriously, go check yourself! Oh yes, and I also studied graphic design there so I apply my studies to the layout composition for pages and covers, which is the underlying structure that makes a page shine to me. 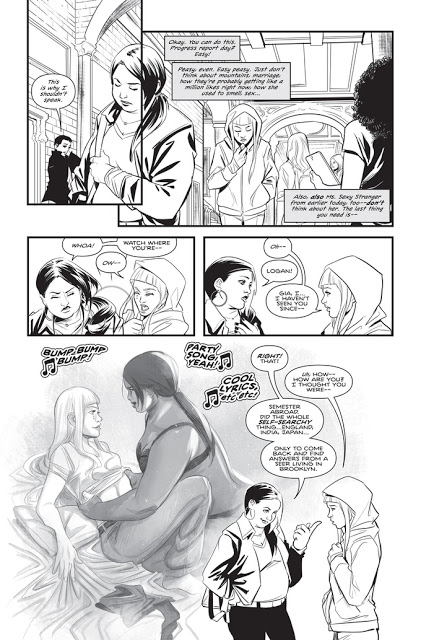 Me: You were born in Italy and work with regional publishers there. Are there any differences between working on American comics and Italian comics?

Preitano: I mostly work on book covers for Italian publishers, so it’s a slightly different approach we take; there’s a brainstorming skype meeting where the editor tells me everything about the book and we discuss what we think may be the core scenes that could be represented on the cover. Let’s say this method allows us to focus on some themes to develop, so I already have quite an idea of what to do.

The method I use for American covers is sending 9-10 colored rough layouts with different ideas, and from there we talk about which one can work best for a cover. Both methods are very good for me and work best when the whole team works nicely together in a productive and inspiring synergy. 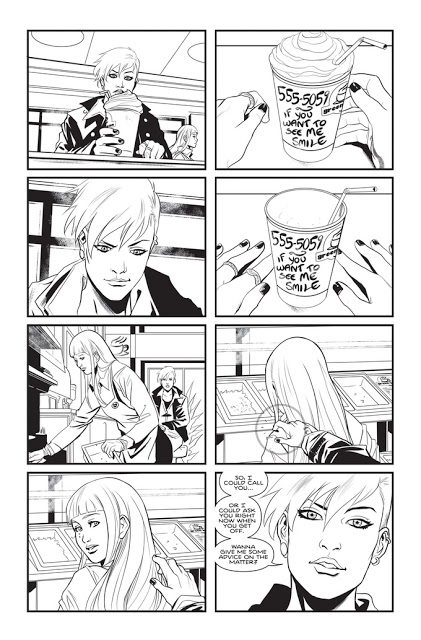 Preitano: Never. Give. Up. And get as many critics (from editors, other pros and so on) you can on your works because they may hurt a little but they teach you a lot as well.

Me: Thank you for your time Pat and Manuel, and best of luck with your project! If you’re interested in Destiny, NY, check out the Kickstarter.

Krampus in the Corner Picture Book and Plush Toy