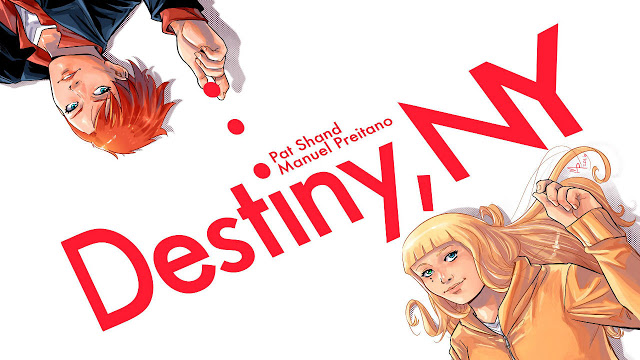 We started the weekend with a swift Kickstart the Week(end), where Nicole D’Andria shone the spotlight on Pat Shand and his creator owned Kickstarter project Destiny, NY! We continue the Shand love here with a press release on the book, which includes the first chapter! That’s right Pat Shand gives you a FREE 22-PAGE PDF of the book’s first chapter! How cool is that? Check below for that and more, including information on our upcoming E-Panel with the man himself this Tuesday night!

Destiny, NY is an urban fantasy about two women in love, and the way their destinies entwine as they begin to grow closer.

Set in a version of New York City where magic is a real and accepted part of life, Destiny, NY is about Logan McBride, a woman who was the subject of a prophecy when she was young. However, much like the child stars of our world, Prophecy Kids often burn out in the worst ways.

Destiny, NY follows Logan as she navigates through graduate school for Prophecy Kids while trying to find her place in a world that tells her she’s already finished.

“In my time writing professionally, I have had incredible opportunities. I have enjoyed long runs as writer on Robyn Hood and Charmed, told stories featuring my favorite Marvel superheroes in my Iron Man and Avengers novels, and even got to work on dream projects such as Joss Whedon’s Angel.  Manuel Preitano and I are passionate about the characters and the world of Destiny, NY, and we have a lot to say with this book… and we believe that Kickstarter is the right platform to bring this story directly to our readers with no middle man. This is a very personal story, so we wanted to be sure we tell it the right way.”

“Destiny, NY features New York City as it truly is, with a diverse cast of characters and a story that uses grounded fantasy to comment on the fast-paced nature of modern adulthood. Even though we have added an element of magic, the goal is to represent the New York that is rarely seen in fiction: the real New York, in all of its stunning variety and nuance. Logan and Lilith, our romantic leads, have a lot to say about this city, but the city has much to reveal about them as well.”

The Kickstarter campaign started on October 4th, 2016 and will end on November 2nd, 2016. It is currently 30% of its overall $20,000. Shand and Preitano are offering a host of rewards, including:

The Kickstarter campaign is live! You can also find the widget on the side in our Kickstarter Spotlight!

Don’t forget that you can read the first 22-page chapter of Destiny, NY FREE!

Tune into Comic Frontline this Tuesday Night at 9:45 PM ET where we will be skipping the news on Frontline LIVE and doing an E-Panel with the man himself Pat Shand! Bring your questions for the show, and join in one of our E-Panels, which are like Comic Con Panels but with NO LINES and NO LIMITS!!!! Be sure to stick around after the E-Panel for our Top 5 comics of the week! 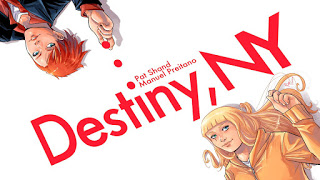 Let us know in the comments what you think of this Pat Shand Destiny, NY Announcement and don’t forget to follow us on Twitter for the latest Previews, Reviews, News and Interviews!
All images images are courtesy of Pat Shand