Spinning out from the pages of the Heroes: Ignited Anthology, “Nightwasp: The Man Who Is Hardly Ever Afraid” becomes its own original series. Help support it via Kickstarter and enjoy my interview with the creator.

Nightwasp is full of comic book tropes from vintage and silver age comics. The first issue shows Nightwasp and his sidekick Ferret Lad facing off against The Weatherman (a combination of The Joker and Ron Burgundy), who wants to raise meteorological mayhem on Metro City. 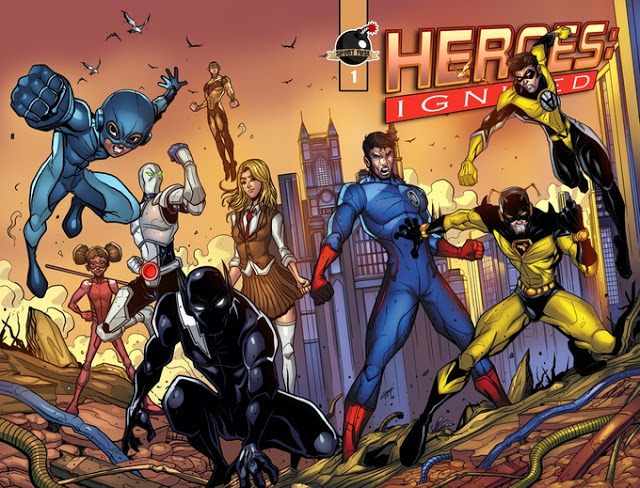 The series is part of Shot Fuse Media, the same company who published our very own Kathryn Calamia aka Comic Uno’s comic book series Like Father, Like Daughter. Keith Crook is the creator of Nightwasp. Pencils and inks were done by Allan Otero while colors were done by David Aravena. They worked from the roughs of Eisner winner Scott Shaw (Captain Carrot, The Simpsons, Sonic the Hedgehog, The Flintstones).

The project is trying to raise $3,200 by November 30, 2016 at 11:59 PM EDT. Backing for $5 gets pledgers Indy Comic Premiere (Heroes: Ignited Edition), which includes interviews between the creators of several Short Fuse Media done by myself and Jay El. Other rewards include a PDF of Nightwasp #1 ($7) as well as physical and digital copies of the book along with the Heroes: Ignited Anthology PDF ($15). There are also pin-ups ($50), T-shirts ($50), cameos in the story ($100) and an action figure pack ($150). If you backed the Heroes: Ignited Kickstarter, your bundle deals will differ.

Check out the Kickstarter here. You can also learn more about it in my interview below with creator Keith Crook below:

Me: How would you describe Nightwasp and his sidekick Ferret Lad?

Keith Crook: Nightwasp’s inspiration originally comes from two of my favorite underground comics, R. Crumb’s “Whiteman” and Larry Welz’s “Captain Guts.” Then, from Boomer TV, you can splash in the affluent vapidity of Thurston Howell, and the patriotic insanity of Major Frank Burns of M*A*S*H (who ceased being a parody during the current election cycle!). Obviously, the 60s Batman series, which was one of the funniest shows ever, was a template.

Ferret Lad was originally the world’s oldest Teen Titan; sort of a superhero Chris Peterson. There’s still that “I’m too old to be an f-ng sidekick” storyline, but he’s also sort of got that Fresh Prince of Bel-Air thing going on being a poor black kid from the hood who gets taken in by one of the richest men in the world to be his superhero sidekick.

Me: What inspired a villainous mash-up of The Joker and Ron Burgundy?

Crook: So I had written Nightwasp as a screenplay in 1992 during a brief period where I lived in LA. And it had actually gotten some nice buzz, Harold Ramis’ Ocean Pictures loved the writing but didn’t want to do a superhero. But his assistant said he was “a fan” and that I had the green light to submit anything I was working on in the future. Anyway, fast forward to a couple years ago. I sold my small ad agency (I got married a year later, moved back to NYC and started writing for MTV Sports and in advertising) and decided to get back into writing stuff I enjoyed, as opposed to copy writing about credit cards and small business loans. One of the things I did was to revamp the original Nightwasp. I changed the cold open to include a short battle with the Weatherman. I loved him so much that I ended up weaving him through the entire storyline. As a student of comedy writing I believe that funny characters, like Reverend Jim or Alan Partridge, make creating funny scenes much easier. 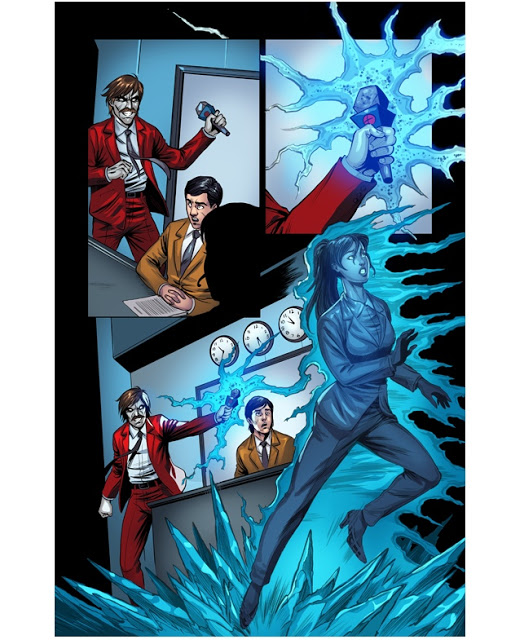 Me: What are some of your favorite comic book tropes?

Crook: I grew up on Silver Age Marvels. Spidey was my favorite until Gwen Stacey died in July of ’73—am I the only person who sees the connection between her death, the Beatles break-up and Watergate!? I also dug Superman and Batman, but they were comic books; Spider-Man was a soap opera centered around a guy who had been bitten by a radioactive spider.

Me: How did you get together with Short Fuse Media and your artist Rashaan to publish Nightwasp?

Crook: I’d tried producing this myself. I used a bunch of other artists I met through one of those online art freelancer sites. Each experience got weirder and I lost more and more money. When I was about to start drawing myself, I saw Short Fuse’s ad on this site. I hired them as a team to work from Scott’s roughs and one issue became five. I’m an internationalist, but it’s so important to have talent local that you can communicate with without typing into Google Translate!

The idea to bring them in as a producer grew organically as we worked on production. I really liked how they marketed Like Father, Like Daughter, and that’s something I have no interest in—to my own detriment. I just want to write more and more Nightwasp comics. I’m really looking forward to watching my characters, major and minor, evolve—there are no “throwaway” characters in Nightwasp! The storyline of the first series of five books creates the next series. 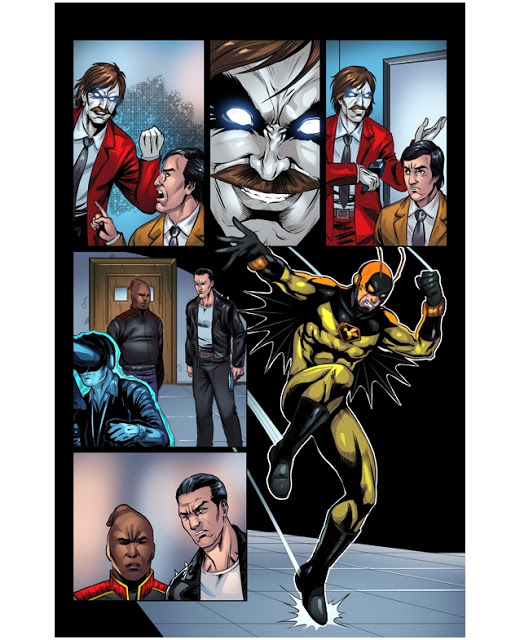 Me: And how did you come into contact with Eisner-winner Scott Shaw and what was his role on the project?

Crook: Scott and I worked together at Ogilvy & Mather Advertising in the early nineties in Los Angeles. He did the art direction on Pebbles Cereal commercials and I had the pleasure of writing a couple of those spots. Being a New York transplant, the Shaw’s home became my goto location for Christmas and Thanksgiving dinners. I had originally written Nightwasp in 1992 as a screenplay. A couple years ago I dusted it off and had Scott break it down into a five-issue story cycle. His roughs are what I gave to the various artists in Brazil, the Philippines, Indonesia, etc. who I’ve brought in to draw Nightwasp. They’d always disappear halfway through a project, it was a nightmare. That gets me into Short Fuse Media. I went through so many pencillers, inkers and colorists trying to do Nightwasp myself! I was at the point that I was going to draw it myself when I found Short Fuse online and their team of artists has been incredible. As we’ve worked our relationship evolved to the point of a partnership. 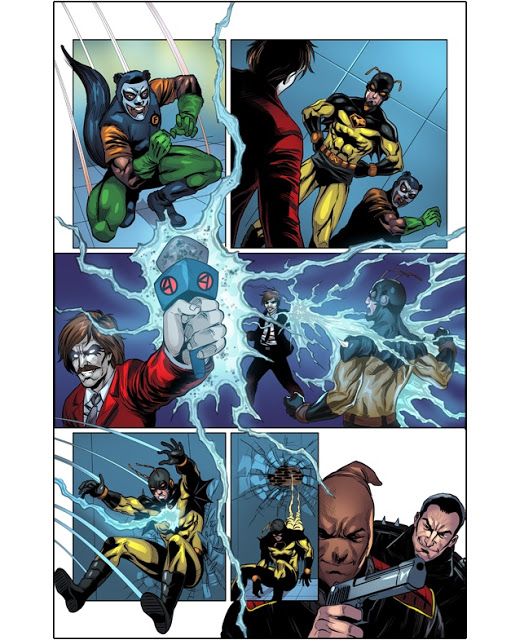 Me: What is the number one reason you think people should pledge money to Nightwasp?

Crook: It’s funny. And we live in a time of great homogenization. Nightwasp is not aiming at a broad audience, and it needs the direct support of people who want independent comics to survive as an art form.

Me: What can you tell us about the future of Nightwasp? How many issues are planned for the ongoing series and will he be crossing over with any other Short Fuse Media properties?

Crook: I’m three scripts into the second story arc, which looks to be six to seven issues right now. The new super villains, love interests and situations that Nightwasp and Ferret Lad find themselves in honestly make me laugh out loud editing my scripts. I don’t want to give away too much.

But I will say that Ward Woodcock has lost his fortune and so Nightwasp has to do a lot of advertising and personal appearances to keep gas in the Wasp-Wagon. Meanwhile, Deron fixes up Ward with super-rich socialite Happy Underbush, but if he marries her, will she accept his crime-fighting nightlife? And Ferret Lad’s girlfriend discovers his secret identity and blackmails Ward and Deron.

That’s just the personal stuff. We have that magically malevolent Manrod the Magician for Nightwasp to fight—plus something goes terribly wrong when Christian scientists trying to set off the Rapture clone Jesus using DNA found on the shroud of Turin. There will be more issues of Nightwasp after that furious finale ONLY if he can save the world from his deadliest foe!!!

As far as cross-over’s, I’m game. The only thing is Nightwasp is a parody, kind of a Stephen Colbert reactionary type. It would have to work for both titles, but I’m definitely up for trying. 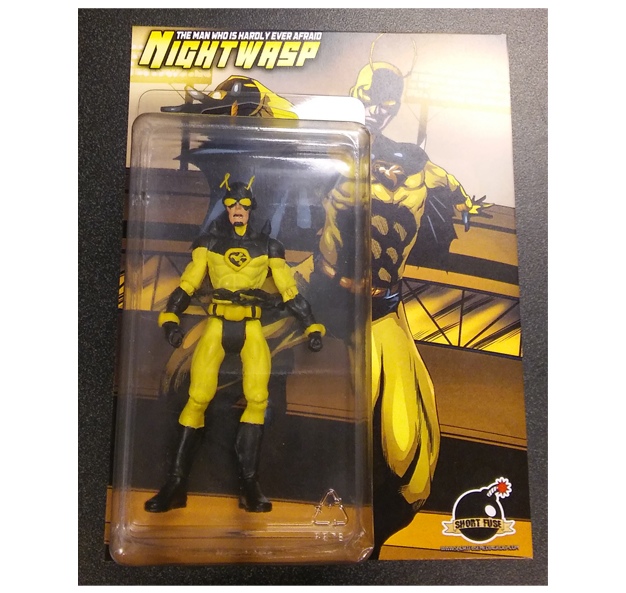 Crook: Do it because you love to do it. If you think you are going to get rich, meet girls, or win a Nobel Prize (hey, if Bob Dylan could get one for songwriting, why not you?) than you obviously have the imagination required to be a great comic book writer! Go for it, kid!

Me: Thanks for taking the time to talk with me Keith. Enjoy some comic book tropes by supporting the Nightwasp Kickstarter.

The Adventures of Penelope Hawk

Monster of the Week #1