AY-YI-YI  Zordon there’s a new, important story element that appears in issue #9 of Mighty Morphin Power Rangers, on sale today! Below you will find a preview of the issue, and the huge reveal! MAJOR MORPHIN’ GRID SHATTERING SPOILER WARNING!!!!

• A mysterious new Power Ranger with shocking origins makes a worldwide debut in Mighty Morphin Power Rangers #9 from BOOM! Studios and Saban Brands. The issue is available for sale today, November 30, in comic shops and on digital platforms.

• This marks the first time a new Power Ranger has been created in “Mighty Morphin” continuity since the series debuted over 23 years ago. The mysterious new Ranger is a key architect behind the chaos that has plagued the Mighty Morphin team since the launch of the comic book series. This reveal is part of a long-term story with far-reaching effects and consequences.

• Issue #9 is illustrated by series artist Hendry Prasetya. A jpeg of the mysterious new Ranger as it appears in the issue is below: 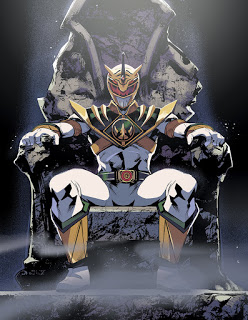 • The identity of this new Power Ranger will be revealed in Mighty Morphin Power Rangers #11 by Higgins and Prasetya, on sale in January. (Note: December’s issue #10 will feature a “break in the action” story featuring a solo adventure centered on the Blue Ranger, Billy Cranston.)

• February’s Mighty Morphin Power Rangers #12 (also by Higgins and Prasetya) will reveal the origin of this mysterious new Ranger.

Synopsis: While Tommy and Jason face off against Black Dragon on the Moon, the rest of the Rangers seek a means to jump-start their powers and save their Zords from his influence! With Billy’s life on the line, will the Rangers overcome their greatest challenge or find defeat in the claws of this familiar foe?