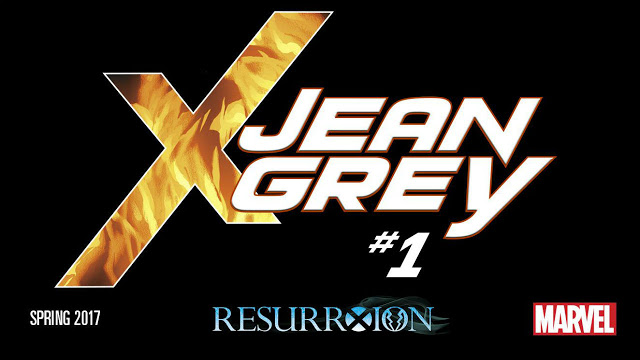 Like the Phoenix before her, Jean Grey rises from the ashes this Spring to headline her very first ongoing series! Marvel is pleased to announce JEAN GREY #1 – an all-new series from blockbuster creators Dennis Hopeless (All-New X-Men, X-Men: Season One) and Victor Ibanez (Extraordinary X-Men, Storm)! Be there as the fiery young heroine sets out on her own and prepares for the fight of her life! 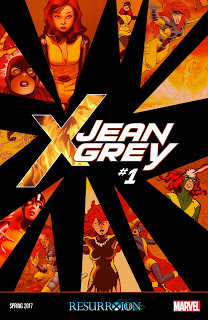 A vision. A premonition. A warning. The Phoenix is coming back to Earth. It could be tomorrow, it could be years from now. But it’s on its way. Determined to not succumb to the fate that befell her adult counterpart, Jean will fight the future and forge her own destiny. One problem – she’s not ready. Not even close. So, on a quest to save her own life, she’ll travel across the Marvel Universe, honing her gifts under the tutelage of the greatest heroes and teachers. Even that may not be enough. Can Jean ever hope to escape the Phoenix? Or is the cycle of death and rebirth doomed to repeat itself?

“She needs to level up. She needs to become a prepared Jean Grey by the time the Phoenix arrives. So she puts herself through a lot of things to try to get ready for something she can’t really prepare for. And I think a lot of people can relate to that.”

The heat is on this Spring as Jean Grey sets out on a journey that will turn her world upside down. Because if she fails – all is lost. Don’t miss JEAN GREY #1 when it comes to comic shops and digital devices this Spring! 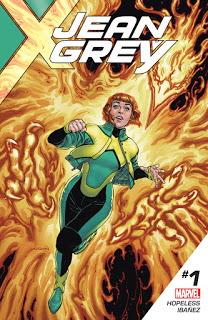 Jean Grey helped to found the X-Men as Marvel Girl in 1963’s X-Men #1 alongside Cyclops, Beast, Angel and Iceman. Jean Grey along with the original X-Men team traveled from the past to the present after present day Beast traveled back to recruit the young X-Men in an attempted intervention for his friend Cyclops who has began a journey down a darker path.

This series will mark Jean Grey‘s first solo title, previously she has only appeared in team or co-lead titles and a few one-shots including X-Men Origins one-shot in 2008, and a Marvel Girl one-shot in 2011.

Since returning young Jean Grey has struggled with her new powers as she came from a point in time when she was just a low-level telekinetic, who over time discovered she also possessed telepathy. Her powers were controlled by mental blocks placed by Professor X so her powers would not overwhelm her, her hurt others. She has wrestled with the knowledge of not just her death, but the way people view her growing powers. Jean Grey has also “outed” Iceman who has since come out to everyone that he was gay, something that until All-New X-Men #40 was only a joke on FOX‘s Family Guy.

Jean Grey has went by a few monikers over the years, during the ’60’s of X-Men Jean used the codename Marvel Girl. In ’76 she took on the name and powers of the Phoenix after an encounter with the Phoenix Entity. The Phoenix eventually became corrupted and became the Dark Phoenix who destroyed a whole system and was ordered to death by the Shi’ar Empire. It was later revealed that Jean Grey was never the Phoenix, the entity had created a look-a-like of Jean. Since then Jean had gained the powers of the Phoenix and alternated between, Marvel Girl, Jean Grey and the Phoenix codenames. Jean died in New X-Men #150 in 2004. She has appeared a few times since then, but has never returned for good.

Jean Grey has appeared in X-Men related animated series as a regular including FOX‘s X-Men, Kid’s WB X-Men Evolution, and Nickelodeon’s Wolverine And The X-Men as well as appearing in FOX‘s live-action X-Men movie franchise.


Related Links:
Stay tuned to Comic Frontline for more on this week’s ResurrXion teasers, and to Frontline LIVE 132  this Tuesday night at 9:30-ish PM ET as the Frontline LIVE Crew discuss this and more.
To find a comic shop near you, visit Comic Shop Locator or call 1-888-comicbook.
For comics anytime, anywhere check out Marvel Comic Store and Marvel Mobile
Follow & Like On Twitter, Facebook, Google +, YouTube, Pintrest, & Tumblr