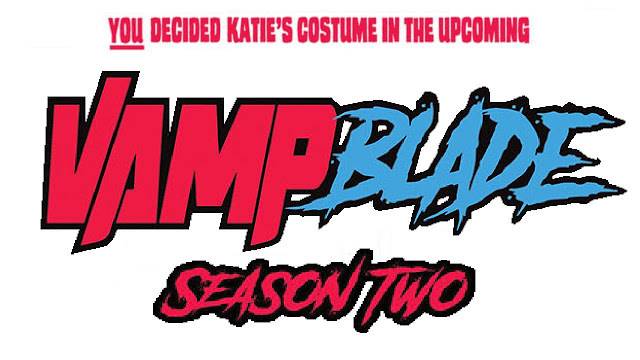 Katie Carva is VAMPBLADE, a comic shop employee thrust into a the role of her favorite childhood comic book hero! When she touches mystical blades that transform her into the 90s bad girl comic book character of the same name, she enters a world of secret conflict, with nasty hidden other-dimensional invaders; space vampires called the Glorkians. Now, after a year of adventures and discovery into her creepy new world, it’s time for her to shed her 90’s style and take things to the next level! The fans have spoken! 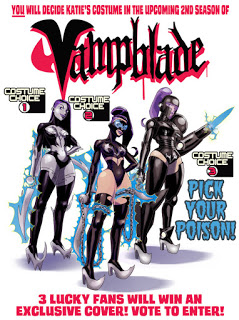 When given the choice to vote for the next costume Katie Carva aka VAMPBLADE would be wearing in season two of the hit series, costume choice #1 won by a landslide!

Vampblade wraps up its first season with January’s issue 12, and fans were given the chance to vote for how the character would appear in the series moving forward. The new costume was decided with both an online vote and the sales of special variant covers for each of the three costume choices available with the upcoming 12th and final issue of season 1. Now that voting has closed we’re excited to announce that costume option #1 was the fan favorite, and it’s this dramatic new design that will help take the character in a bold new direction when her series returns in 2017!

“We’re having a blast creating Vampblade, so bringing the book to the fans, who are so passionate and supportive, to help guide the direction the series takes is just amazing! We have some big things planned for Katie and her world in 2017. We’ve seen her fight the hidden other-dimensional vampires around her comic shop and Detroit, but now her new costume really signals a transformation not just in her look, but her story too!”

You can see the winning Vampblade costume when the all-new second season series begins in March 2017, and with the issue 12 variant covers next month! The 10 winners who won a signed copy of a variant edition of Vampblade Season 2 #1 will be contacted soon.