THE UNCONSTITUTIONAL ACTIONS AND ADVENTURES OF
THE DEAD PRESIDENTS — FIRST ISSUE
Super-powered dead presidents fight super-villains from history to save humanity!

Now available on Comixology Submit, the first part of a four part story telling the inaugural adventure of 38 DEAD PRESIDENTS gaining super-powers to save Earth from a cosmic-powered dead Hitler and his dead allies from the trash-bin of history.

THE UNCONSTITUTIONAL ACTIONS AND ADVENTURES OF THE DEAD PRESIDENTS (TPD) combine a love of presidential history and super-hero comic books into one epic tale written by Kevin Garcia with the art by Dan Lauer and colors by Walt Barna. After Hitler invades Earth through a tear in space, Thomas Jefferson and the other dead presidential nerds come up with a plan to stop him, but not all of TDP are interested in Earth’s problems including the one that can save the day: GEORGE WASHINGTON. He’s enjoying the After-Life living it up with Frank Sinatra and the Rat Pack. 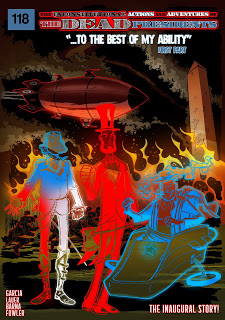 Kevin is a former high school social studies teacher turned screenwriter, and comic book reader since 1991. Not only a reader but he also had a seven-year career behind the counter of two different comic book shops. The art for the 4 issues comes from Dan Lauer of Western New York with the colors from Walt Barna of Cape Town South Africa.

“I have useless presidential knowledge floating around in my head right next to everything I know about comic books. So I smashed them together.”

The first issue was released digitally on Comixology Submit December 21, 2016. The next issue is coming as soon as Comixoloxy says so, with issue 3 almost ready to go and 4 to be drawn.

Check out thedeadpresidents.com for new releases of the inagural story “… To the Best of My Ability.”

“We the Dead Presidents…”
After a rift opens between our reality and the After-Life, a cosmic powered Hitler is the first through with plans to conquer Earth. Thomas Jefferson and other nerdy dead presidents like John Quincy Adams and Richard Nixon, believe they are the only ones that can match a dead Hitler’s power. However, the one that can unite the 38 dead leaders is living up the After-Life with the Rat Pack. 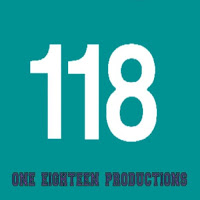