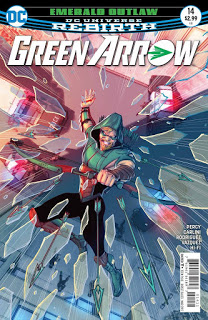 Well I kind of forgot to read issue 13 since I forgot that Green Arrow is now a twice a month comic. Whoops. Anyways, this was a fun issue, fast paced as 90% of the Green Arrow comics have been, amazing art work and an over all, very easy to follow story.
What I appreciate about the Green Arrow comics is that it always follows what I was taught during college with scripts and that it has it’s over all story arch that’s going on while each issue still has the ABC drama script style.
Ollie rarely get’s what he wants by the end of the story unless it’s the end of a certain smaller arch, and even than, Ollie still isn’t exactly ”winning” yet. And yet that doesn’t bore me or make me drop the series, it keeps me reading because I want to see him succeed as well as the rest of the gang.

**It’s only my favorite quote because I imagined John Barrowman saying this and I nearly spat out my coffee. 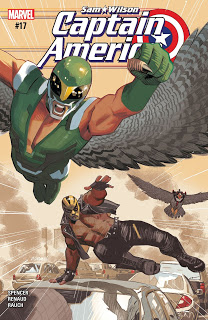 So it’s been since issue 14 back in October that I last read a Sam comic and I feel really bad about that. Because I love supporting this series but money and life choices have had me borrowing this issue from friends.

The good thing is since I read issue 14 I know who our lovely new Falcon is and I know Rage. I LOVE the dynamic this series has with Sam’s issues that Steve never has to deal with in the way that Sam does as Captain America. I love that they haven’t just made all of the token white asshole characters just go away and start a new arch. It’s something Sam’s been dealing with for months in the comics, possibly years because I’m not 100% on the time lines but I digress. I’m also in love with Misty and Sam being kinda like Joaquin’s ”parents” and helping him get a Visa because of Matt.

”Just gotta put my large intestine back inside.” 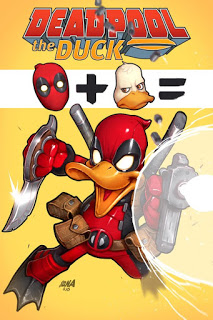 I don’t know why Marvel ”needed” to make Deadpool the Duck but I’m kind of happy they did? This isn’t exactly something I’d go out and read on my own but Kat told me to read it and it’s stupid humor had me snickering to myself a lot. It was a fun issue, I’m curious as to how long this is going to be, I’m honestly hoping it’s a mini series, maybe five or so issues. Either way, it was a fun read, it was easy and a good thing to read before work because of how mindless it is.
One of my favorite things though was that it had Howard the Duck’s ”film noir” style monologue’s mixed with Deadpool ”talking” to Logan as a voice in his head. It was two different styles that shouldn’t have worked but did so I applaud the writing team and everyone else that was apart of this issue/is apart of this series, for pulling it off.

”What do you think voice in my head?”

”Sorry to bring my troubles into your economically depressed life!” 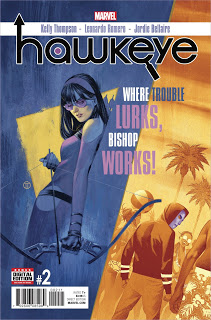 Aw, Katie Kate, I hope things work out for you and the computer boy. I also hope you don’t get in some love triangle… I ALSO WANT AMERICA WITH YOU. I want a lot of things really. I’m sorry, it needed to be said.

ANYWAYS, this was, like last months issue, amazing. Go Kate Bishop, just not the price of the comic. Damn Marvel Now.

I love the style of this series, I’m thrilled it went more like the Matt Fraction style instead of the All New Hawkeye version, just, thank you Hawkeye team, thank you. But I digress, again, Kate is fantastic. This series is going to be a fun run no matter how long or short it is, I can tell. I mean I’m hoping it’s a long run because Kate’s deserved to have her own series for years. I appreciate that this also has a bit of a ”film noir” style flare to it and I hope it keeps up!

”Are you kidding? I’m mostly caffeine at this point. We gotta put more in or who knows what happens.” 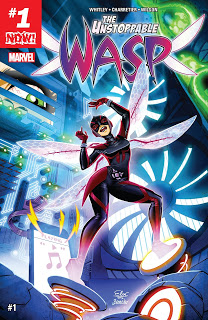 I went into this comic knowing nothing but that Kat recommended I read it so I did. This was such an adorable read and I’m so happy I read this after work.
Nadia is an amazing ray of sunshine and I am 100% adding this onto my pull list because it was such a pleasant read. I hope that I get more of Ms. Marvel and Bobbi working with Nadia because ”GIRL” is going to be amazing to see throughout the series. Bobbi oh girl, I miss you. AND THE FACT NADIA GOT HER ALL TEARY EYED, I GOT TEARY EYED, I’M SO HAPPY. THANK YOU THE UNSTOPPABLE WASP team for letting all of what was said, be addressed. Thank you, thank you, thank you.
If you need something that will make you smile today, go out and get this comic.